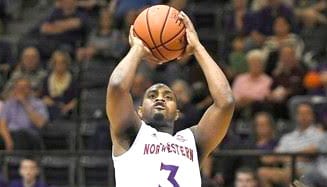 NATCHITOCHES — After a breakout sophomore season last winter, Northwestern State basketball player Devonte Hall is hoping to have bigger impact in Poland as part of an Athletes in Action tour group.

Hall, a junior-to-be from Bossier City and Bossier High School, is one of 10 college players who flew out of Chicago this weekend for the tour, which will include games against teams that play in Polish pro leagues.

“We are going to have Bible study,” said Hall, who becomes the latest in a series of Demon basketball players who have participated in Athletes in Action tours in Asia and Europe. “Without God, there’s no telling where I would be right now.”

Sharing his Christian testimony, which includes his faith helping him cope with the loss of his father, is something Hall was eagerly anticipating going into the trip.

“It is going to help me grow and mature because those guys (opponents) are professionals. That will be a good opportunity for me to see where I am and what I can improve on,” he said.

As a sophomore in 2015-16, the 6-foot-1 Hall ranked 14th nationally and first in the Southland in assists per game (6.3) after being thrust into the starting point guard role following the opening-game loss of star senior Jalan West to a season-ending knee injury. Hall’s 14 assists at Central Arkansas were the most by any Southland player this year and tied for the eighth-best single-game performance in NCAA Division I last season.

Along with leading the conference by a full assist per game, Hall ranked fifth in the league with a plus 2.1 assist-turnover ratio. His 12.9 scoring average in conference games ranked 18th among all league players. Hall was fourth in the conference in double-double games (double figures in two stats) with four.

Hall, who has a 3.1 grade point average in accounting, was nominated for Academic All-Southland Conference.