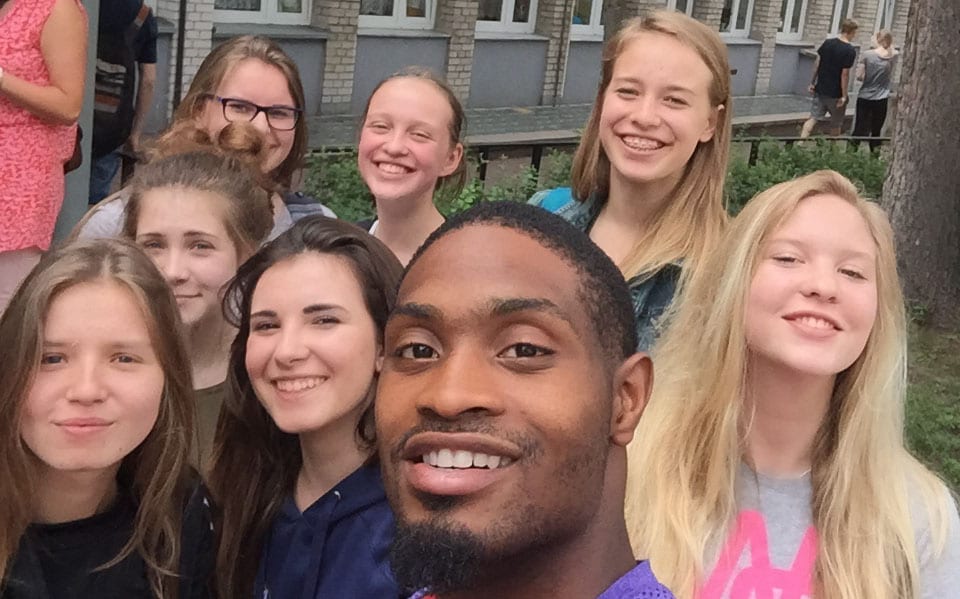 Hall traveled this past week with Athletes in Action, a Christian-based group that takes American college basketball players and tours countries in Asia and Europe, playing against local professional teams.

AIA beat the Belarus national team in two of three games in Bialystok, a city in eastern Poland.

“The play was a lot more physical overseas, and it took us a couple of minutes in the first game to adjust,” Hall said. “But I loved the way they let you play physical, because that’s the way we were taught to play at (Bossier High School).

“We didn’t have the nicest things, but we were taught to work hard for what we wanted. Games like that will help me against opponents like Stephen F. Austin. They play a physical style, and the referees aren’t going to give us a break.”

The group visited high school students in English classes throughout Poland’s capital city of Warsaw, and Hall said one student reached out to him on Facebook after the visit.

“Our team grew really quickly into a brotherhood,” Hall said. “We shared our stories with the kids, and I had to humble myself from other players’ stories because of the faith they showed in God.

“One of the girls wrote to me on Facebook saying how positive a guy I was and that I was a role model to her and others. She said that I was her favorite basketball player and wrote to me in English, a language they were still learning.

It touched me, and it was a true eye-opener.”

Hall and his teammates, which included three Polish players, experienced a darker side of humanity’s history when the group visited concentration camp sites at Auschwitz and Birkenau. More than 1.1 million Jews and other ethnic minorities died in these camps during World War II.

“It was crazy. I couldn’t imagine being there when it was actually going on,” Hall said. “I can’t believe that families went through that. I saw pictures of children the ages of my nieces and nephews who were starving and working in these camps.

“You could see their ribs.”

After adjusting to the physical play of Belarus, a country of nearly 10 million on Poland’s eastern border, AIA won the first game 76-75, fell in the second game 86-74 and took the final game 83-79 after leading by 20 at halftime.

“I felt like I did really well,” Hall said. “You can only be as good as your team, and we put in the extra work and busted our butts in practice.

As a sophomore at NSU, Hall averaged nearly 11 points and more than six assists per game in a starting role after senior point guard Jalan West’s injury. Hall returns to an NSU squad that returns West and leading scorer Zeek Woodley with five other players who averaged double-digit minutes.

Hall said he’d recommend the trip to any basketball player, but added as a self-described picky eater, he was happy to return to an American diet.

“Everything tastes different there, and most of the time I ate a Subway sandwich,” Hall said. “I learned a lot on this trip, and I realized how lucky I was to live in the United States.

“I would recommend this experience to everybody, but I realized how much I love our country.”