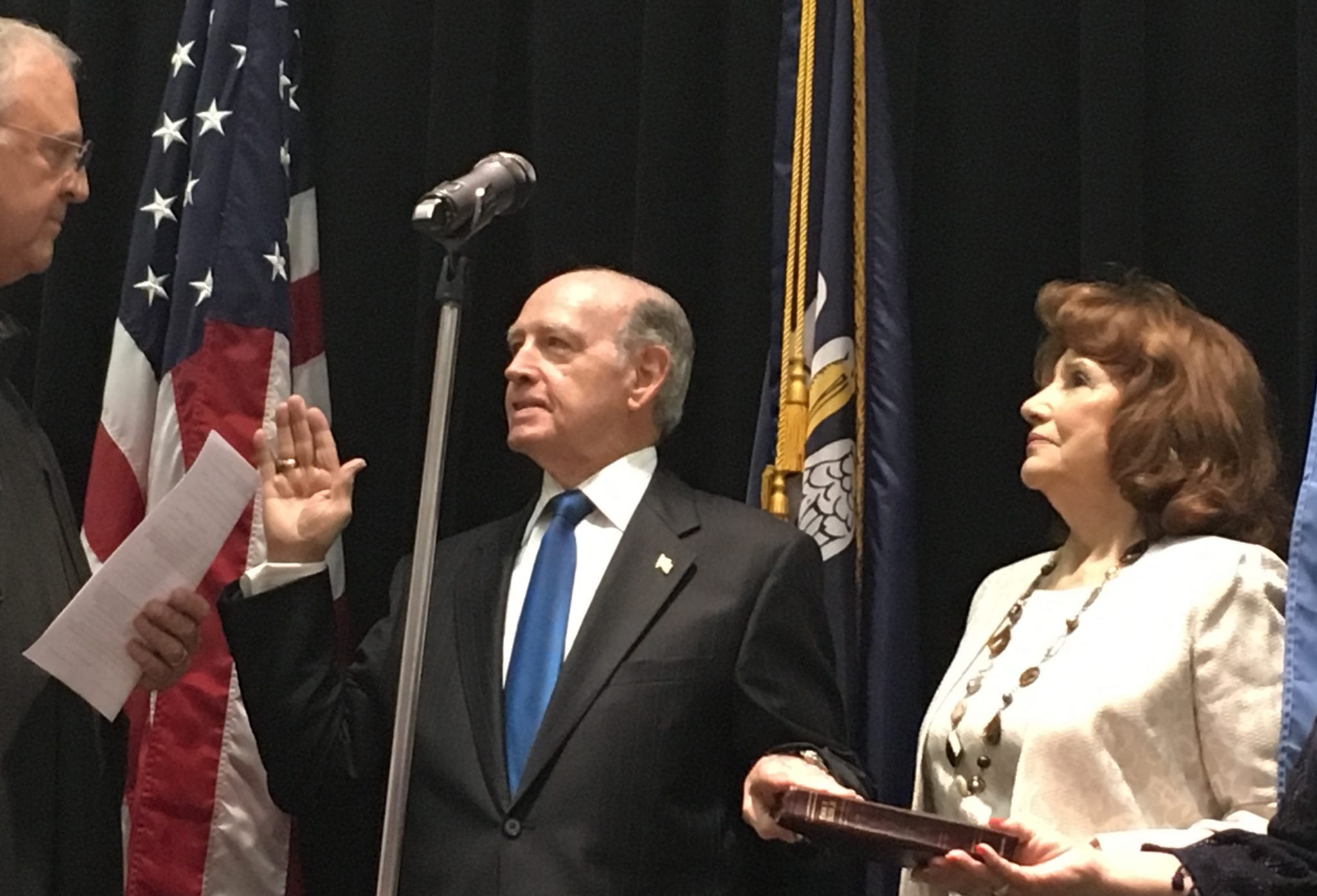 It’s business as usual in Bossier City as the mayor and councilmen were sworn in for another four-year term, which officially began on July 1.

All were re-elected without opposition, except Irwin, who easily defeated his opponent in District 1.

Walker is serving his fourth term as mayor.  Prior to that he was chief administrative officer for  the late Mayor George Dement.  In all, Walker has spent more than 30 years in city government.

He sees himself as youthful as ever.  He said, “Even though I am approaching middle age, I feel  that I am healthy, I like what I’m doing, I like the city. Of course, I have four more years to be mayor and beyond that, who knows.”

Taking a more serious tone, Walker said, “I  really believe that not having term limits at the municipal level is good for us.We get continuity of actions.  We cab start something, plan it, and we’re here long enough to get the resources to make it happen.”

“We’re always going to work on public safety.  I feel  like if your community doesn’t safe, a lot of good things don’t happen,”: Walked stated.

Bossier Parish Police Jury Treasurer Sheryl Thomas has announced her retirement effective July 18 and she was delivered some very good news at her last jury meeting this past week.

“For Sheryl’s last official audit, there are no findings or questioned costs,” reported Travis Morehart of Cook & Morehart, CPAs, the firm tasked to review the police jury 2016 audit.

“You know each year we encourage everybody to increase that fund balance and you did. That’s at least two to three years in a row. You’re moving in the right direction and that’s good news,” he said.

Morehart also told jurors they would find nothing negative in his letter accompanying the audit.

Referring to planned projects in the parish, Parish Engineer Butch Ford said he was suggesting the future east/west roadway be split into smaller segments.

“With smaller segments we can get funding from NLCOG (North Louisiana Council of Governments),” he said. “We can seek funds for engineering and move from the west and east ends, from Bellevue Rd. and La. Hwy. 3. The central part would be the last to finish.”

Not that very many people care, but qualifying  for the job of State Treasurer takes place this week from Wednesday through Friday, July 12-14.

It is not a sexy political position and it will be the only statewide race on the ballot on October 14, so it is not generating much interest.

But, nevertheless, there are individuals who want the job, which had been held by current Sen. John Kennedy for 17 years.

State Rep. Julie Stokes of Kenner, who had indicated she was going to run, announced that she will not qualify. She revealed that she has been diagnosed with breast cancer and will undergo chemotherapy.

That leaves three potential candidates who will likely qualify this week. They are former state Rep. John Schroder of Covington, who resigned his legislative seat to make the race; state Sen. Neil Riser of Columbia; and Angele Davis of Baton Rouge, president and CEO of the Davis Kelley Group.

A runoff, if necessary, is scheduled for Nov. 13.

Lou Gehrig Burnett is a seasoned veteran of national and local politics. He publishes Fax-Net Update, a weekly political newsletter