Faye was a lifelong resident of Mansfield, LA till she moved to Benton, LA in 2004 to live next to her son and daughter-in-law. She was a faithful member of the First Baptist Church of Mansfield till 2004 when she moved to Cypress Baptist Church in Benton. Faye was involved in the Mansfield Garden Club for many years. She was employed in the insurance business till she retired at the age of 82. She was a professional seamstress who enjoyed keeping herself and family well attired. Faye loved all animals and there was never an unfed stray in the neighborhood. Faye was a loving mother who enjoyed being with her children, grandchildren and great grandchildren. She was known as “HONEY” to her family and was always quick with a smile, joke or wise crack. 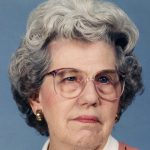 HONEY resided in her home in Benton until January 2012 when she moved to Pilgrim Manor Guest Care in Bossier City, Louisiana.

The family would like to thank Dr. Raja Zabaneh for the loving care he provided Faye for the last nine years. Also the family would like to thank the employees of Pilgrim Manor Guest Care in Bossier City for the wonderful care Faye was given during the last two years and Gamble Hospice for their loving care and support during the last two months. Also a special thank you to the doctors and nurses at Willis Knighton Bossier for the loving care during her hospital stays during the past nine years.