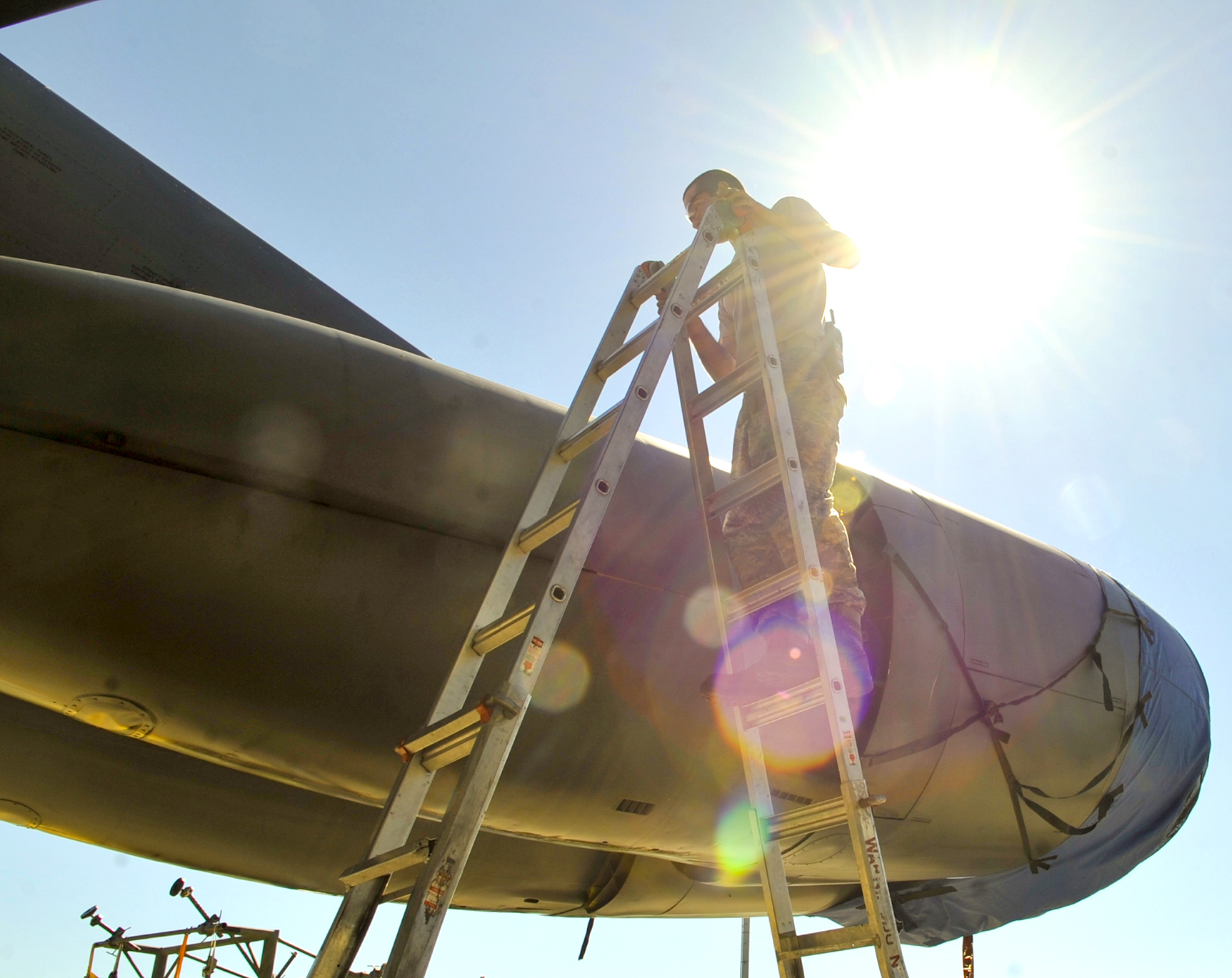 Airmen combat weather to support the B-52 mission

BARKSDALE AIR FORCE BASE — As an Airman walks toward a B-52H Stratofortress, the Louisiana sun beats down. His only defense against the searing heat is a hydration pack and the shade of the B-52 wing he’ll be working under for most of the day

From the 2nd Maintenance Squadron Airmen on the flightline to 2nd Security Forces Squadron personnel at the gates, many Barksdale Airmen spend about as much time outdoors as the aircraft they support. Every day, these Airmen brave changing temperatures, rain and wind to do whatever it takes to keep the B-52 in the air and continue the 2nd Bomb Wing mission.

One of these “outdoor” Airmen begins his day by checking the flightline truck he’ll use to transport himself, a partner and his tools to the aircraft they’ll be working on.

“No matter how hot or how cold it is, I’m going be out there working,” said Senior Airman Andrew Mathews, 2nd Maintenance Squadron aircraft structural maintenance journeyman.

Regardless of the temperature, Matthews says he always takes a water bottle.

“In the summer we have issued [hydration packs] which hold three liters of water,” he said. “In the winter, we have cold weather gear; I have warm wool socks and a beanie.”

Louisiana is no stranger to thunderstorms, but it’s one element that brings a brief respite for these outdoor Airmen.

“If there is lightning within five or if it starts raining hard, there isn’t much you can do on the [flightline] since the crew chiefs won’t be out there,” Mathews said. “Besides that, the weather only makes my work easier when it’s nice and cool out.”

With thunderstorms and heavy rains, transportation comes to a halt and Airmen must work indoors while waiting out the weather.

The weather also has an indirect impact on how maintainers like Mathews perform on the job.

Mathews says that in extreme cold, he can’t move his hands as easily, grab a tool as fast or hold onto it as tight. In extreme heat, it can be difficult to hold onto certain tools due to sweat.

“When it’s cold, your work gets slower because you can’t move quite as easy or can’t grab a tool as fast or hold onto it as tight,” he said. “In extreme heat, you get really sweaty; you can’t hold onto your tools as well because of the sweat making it slippery. You’re always brushing sweat off your forehead; your shirt’s drenched.”

While maintainers must deal with these effects, they aren’t the only Airmen who contend with Mother Nature on the job. The 2nd Security Forces Game Wardens closely monitor Barksdale’s backyard.

“We have 18,000 acres of land, 16 miles of rivers, streams and bayou and six lakes that we have to make sure are in compliance with base, state and federal conservation laws,” said Senior Airman Michael Meserole, 2nd Security Forces Squadron game warden. “The heat makes our job very difficult. In the woods, it can be more humid which makes it five to ten degrees hotter, so we try to stay hydrated as much as possible.”

In the winter, the game warden also tries to keep fluid levels up, but Meserole says he has to wear extra layers and keep moving in order to get the blood flowing. Even at night, the game wardens must take extra measures to do their job effectively.

“The night element makes things different,” he said. “To combat lower visibility, we use night vision goggles and spotlights.”

Even gate guards, who man the entrances and exits of the base, persevere regardless of the climate.

“We’re the first line of defense,” said Staff Sgt. Gabriel Larrazabal, 2nd Security Forces Squadron elite gate guard shift supervisor. “We have to be able to withstand extreme temperatures to provide security for the people who live and work here.”

By continuing to persevere despite the weather, these Airmen protect our nation and its global interests by providing devastating B-52 combat capability.