Kimberly and Steven Ford of Bossier celebrated the beginning of 2015 in grand style, welcoming twins, a son and a daughter, Sutton Kyle and Hanley Nicole. 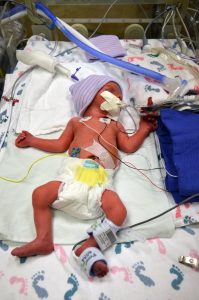 The twins were born at WK Bossier Health Center at 12:43 and 12:44 a.m., Thursday, Jan. 1. Because the fraternal twins were born prematurely, they were transferred to Willis-Knighton’s Level III NICU at the Center for Women’s Health at Willis-Knighton South, where they will be carefully monitored by neonatologists. The twins are the first children for the couple.

Dr. J. Scott Robertson of Bossier Healthcare for Women cared for Kimberly during her pregnancy, but the babies were delivered by cesarean section by Dr. John Carter of Women’s Health Associates, the physician on call on New Year’s Eve.

“We were so impressed with the whole team,” the parents said.  “We couldn’t have asked for a better group of people.”

The parents look forward to joining their babies at NICU, which features special rooms for multiples and encourages rooming-in for parents.