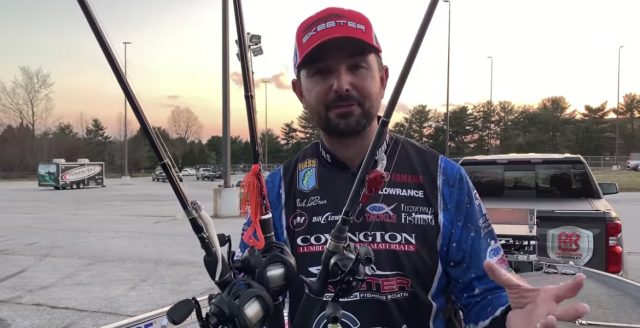 The tournament was held March 4-6 at Lake Hartwell in Greenville, N.C.

Christie weighed in 17-9 to edge Kyle Welcher of Opelika, Ala., by one ounce for the title.

“Had a great day and great event just kind of chunkin’ it wide and power fishing, fishing with nothing to lose, especially on the final day,” LeBrun said in a video posted on his Facebook fan page.

“I would just throw this around some docks, around some rock banks, around bridge pilings, and just kind of where it felt right,” he said.

Because he fished in all three events in the Central Division, he qualified for the Bassmaster Classic.

“The money spends, but going to the Classic is a childhood, manhood, everything dream,” LeBrun told Bassmaster.com. “It’s going to take a while for that to sink in.”

He also finished second in the basspro.com Bassmaster Open at Lewis Smith Lake in Jasper, Ala., weighing in 33-6 pounds. Jacob Powroznick of North Prince George, Va., with 37-9.

In the first Open event last year at Pickwick Lake in Counce, Tenn., he finished 11th.

LeBrun, 38, became a pro full-time after winning the Bass Fishing League’s All American Championship in 2018. He has also competed on the FLW Tour and won almost $350,000 on the Major League Fishing Tour.

The tournament on Pickwick Lake was only his third Open event.

LeBrun told Mark Hicks of bassmaster.com that fishing in B.A.S.S. Open tournaments has boosted his career.

“It opened my eyes to a lot of stuff,” LeBrun said. “I’ve never gotten that level of hype, exposure and publicity from anything I’ve ever done. People were reaching out and texting.”

LeBrun’s next event is the Bass Boat Technologies Stop 2 event on the Harris Chain of Lakes near Leesburg, Fla.

LeBrun lives in Bossier City with his wife, Jolene, and three children, twins Jaxon and Jayce, and 2-year-old daughter Sadie.