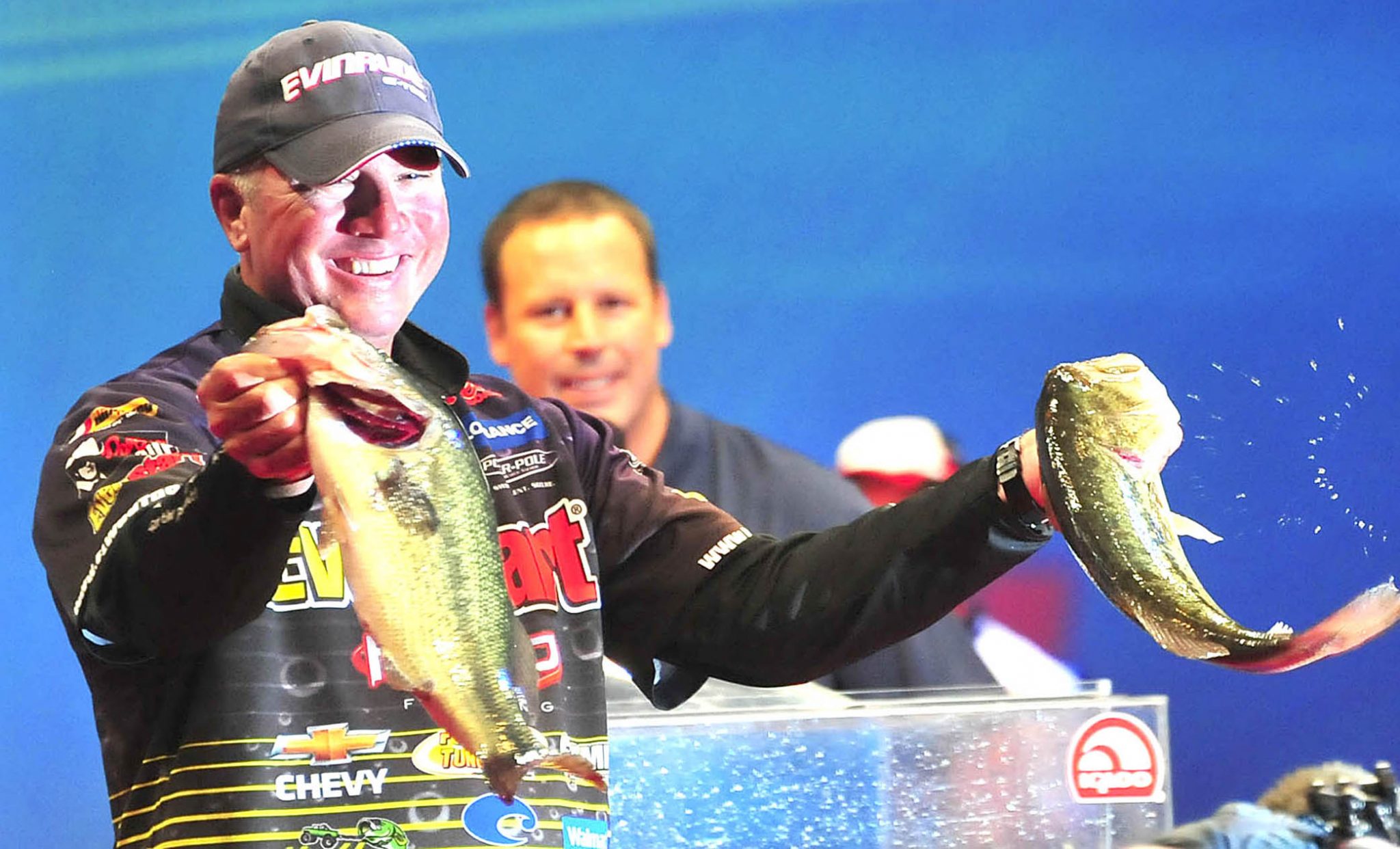 Randall Tharp walked on the stage Sunday evening at the Century Link Center needing to weigh in just over 10 pounds of bass to take the lead in the Forrest Wood Cup.

Tharp pulled three decent-size fish out of his bag and put them on the scale. Then he let the drama build a little before pulling two more out.

The two big bass drew a loud cheer from the large crowd.

Tharp’s five-fish haul of 14 pounds even gave him a four-day total of 53 pounds, 3 ounces and a 4-pound lead over defending champion Jacob Wheeler.

Tharp had to wait for one more angler to weigh in — Day 3 leader Bryan Thrift.

Thrift and Tharp had been neck-and-neck throughout the tournament. Tharp had narrow leads after Day 1 and Day 2, and Thrift led by four ounces after Day 3.

When asked by the announcer if he had five fish, Thrift said he did. But the lack of enthusiasm in his voice told the story.

Thrift’s five fish weighed just 6-11, and the title was Tharp’s.

“I was really disappointed a couple of years ago,” said Tharp, a resident of Port St. Joe, Fla. “It was probably the most perfect tournament I’ve ever fished in my life and I came up second.

“To say it didn’t sting a bit would be a lie, it really did. There’s a lot of lakes we go to that don’t give me an opportunity to win, but when I saw it was the Red River in Shreveport I knew it was going to be my time.”

Tharp had fished in tournaments on the Red twice before, finishing fourth in an Open tournament last year.

“You know, this place, when I saw it on the schedule when it came out about this time last year, it’s all I could think about,” he said. “This is the way I love to fish. I knew that I would be able to get my flipping sticks out and do what I do best.”

Tharp used a jig lure for most of the first three days of the tournament, but he switched to a frog Sunday.

“You get these gut feelings out there and that’s how you win tournaments,” he said. “That was a gut decision and I picked it up and caught a big one on my first cast.”

Tharp also said the support he received from local fans gave him a boost.

“The fans here this week were absolutely phenomenal,” he said. “After the first day, I had a pretty good crowd follow me every day, and everybody respected what I was doing. When I would catch a fish everybody would cheer. That makes it so special for us. That doesn’t happen at every tournament.”

Wheeler was trying to become not only the first angler to win the event back-to-back but the first to win it twice.

He predicted it would take an average of about 12 pounds per day and he was almost right on the money.

Wheeler’s 14-3 stringer stringer was Sunday’s biggest. But he couldn’t overcome a 7-4 on Day 1 Thursday.