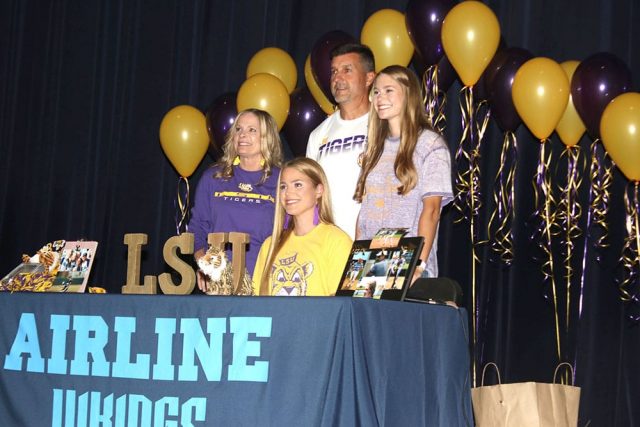 Team USA went 8-0 in the seven-day event. Team USA finished the Opening Round, a 28-game round robin, first in the standings with a 7-0 record. Chinese Taipei finished second.

The teams faced off Sunday afternoon in the gold medal game with Team USA winning 1-0.

Chaffin, now a freshman at LSU, pitched in three games.

She started and was the winning pitcher in the Opening Round games against Mexico and Chinese Taipei.

She allowed five hits and one earned run with seven strikeouts in four innings against Mexico.

She pitched 1 1/3 innings of relief in a 13-0 victory over Peru, allowing no runs and recording three strikeouts.

While she didn’t bat in the event, Chaffin was a clutch hitter as well as an All-State pitcher at Airline. Last season, she led the Lady Vikings to the Class 5A state championship game.

Chaffin is the second Bossier Parish athlete to help a U.S. U-18 team win a gold medal this year.

Parkway junior Mikaylah Williams led Team USA to gold in the FIBA 3×3 U18 World Cup in August in Hungary.

The WBSC U-18 World Cup was originally scheduled to take place in August 2020 but it was postponed because of the COVID-19 pandemic.

An article on the USA Softball website stated that “the WBSC extended the age eligibility to allow athletes who were eligible for the 2020 event with the opportunity to participate in the rescheduled event this year.

“With the extended age eligibility, the 2021 USA Softball U-18 Women’s National Team roster includes one member of the 2019 U-17 JWNT World Championship Gold Medal team, six current NCAA Division I student-athletes and 12 committed and/or signed NCAA Division I student athletes – four of which also advanced to the JWNT Selection Trials through the USA Softball High Performance Program.”