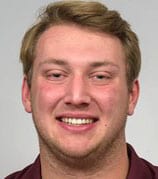 The 6-foot-4, 295-pound Prater was a three-year starter at Airline and a two-time first-team All-Parish selection.
Prater graduated from Airline in December of 2015 and joined the Aggies for spring practice.