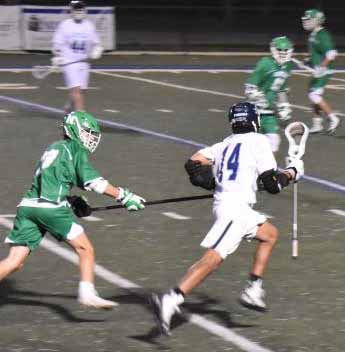 As an outstanding athlete, former Benton Middle School student and athlete Lake Bradford could have chosen to focus on any sport and excel at it. Now a senior at Loyola College Prep, Bradford chose lacrosse as his main sport when he was a freshman and has made a name for himself, attracting the attention of college recruiters.

“I like how I can be creative in lacrosse and I get to have my own play style which other people recognize,” he said in an e-mail message. “I also like how supportive the lacrosse community is in Shreveport.”

The 6-foot-2, 200-pound Bradford was a first-team selection on the Louisiana High School Lacrosse League All-State team at the midfield position. The team was announced on Jan. 31. The season starts later this month.

“Put simply, Lake has the ability to be a one-man band on offense,” the All-State release said. “With his size, speed, and athleticism, he can do a little bit of everything all at a very high level. With or without the ball in his stick, he’s dynamic. Very adept on the defensive end as well. Look for Bradford to be a high impact player in all phases of the game.”
Bradford was the only player from North Louisiana named to the first team.

At Benton Middle, Bradford played football and competed at an elite level in archery. As an eighth-grader, he was an Offense-Defense Youth All-American at a camp in Myrtle Beach, S.C. He also helped Benton Middle and Elementary win four NASP World Archery championships from 2013-17 in addition to multiple state titles. He served as a team captain for three years.

At Loyola, Bradford played JV football and basketball but had his seasons cut short by knee injuries. He didn’t start playing lacrosse until the ninth grade when he received his first sticks as a Christmas gift. As a freshman, he missed the first half of the season with an injury.

“When I returned from my injury, my coach played me at left attack where I didn’t touch the ball for the whole season,” he said. “Over the summer I was determined to start varsity my sophomore year so I practiced religiously for the summer.

“I played for three different summer league teams and I improved so much that I had become better at lacrosse than football and basketball.” The practice paid off big time. Bradford worked his way into a starting position as a sophomore at Loyola.

By the end of the 2019 season, he was already attracting attention, earning several postseason honors. He was named to the 2020 Preseason All-State team.

Like other sports, COVID-19 affected lacrosse and the 2020 season was canceled before a state champion could be crowned. In his shortened six-game season as team captain, Bradford led Loyola with 10 goals, seven assists and 24 groundballs. He recorded hat tricks in games against Byrd, Dutchtown and Chaos. He also forced six turnovers.

Last July, Bradford was the only player from Louisiana to compete in the Under Armour Underclass All-American team tryouts. While he didn’t make the team, he had a good showing against more experienced players from around the Southwest.

Bradford said there is no secret formula to becoming an outstanding lacrosse player. “To become great at lacrosse you have to practice almost every day,” he said. “Over the summer I was either practicing for lacrosse, working out to get better at lacrosse, or playing a game of lacrosse.”

Bradford gives credit and thanks to his coaches for helping him get to the level he’s reached. Shane Koppens is his coach at FTK (For The Kids) Lacrosse, a national team based in Mandeville. “Lake is one of the most genuine down-to-earth players I’ve ever coached,” said Koppens, who is also the men’s lacrosse head coach at LSU. “He is extremely coachable on so many levels. To get an athlete of his caliber and skill level, to be coachable like that, it’s really fun from a coach’s perspective.

“He’s been a blessing to work with. He’s soaked in so much knowledge. He’s a sponge in that regard. He’s really worked so much on his own, learning from the things we’ve talked about, from the individual lessons we’ve had to the team practices to the game situations that we’ve worked on. He’s just been someone who has grown a lot as a lacrosse player.”

Koppens said he is amazed at how fast Bradford has grown as a player. “Not only the way he approaches his workouts and his offseason out-of-practice regimen but how he progresses in an actual game,” Koppens said. “He gets better as the game goes on. It’s almost like a savvy running back in that regard. He starts to break the defense down more as he has the ball.”

As a midfielder, Bradford is allowed to roam the field, play offense and defense and clear the ball. That allows him to use all his skills. “I call him a Swiss Army Knife,” Koppens said. “That’s what we used him as this summer for FTK. He played everything for us and really did it all. That’s where his athleticism gets to shine, in the open field. He gets to use his strength, his speed and his quickness, but also the mental aspect, being able to outsmart a defense or outsmart a defender. He’s really learned a lot in that regard.”

Koppens said Bradford is a leader by example. “You’re not going to hear much from him. He won’t say a word like a silent assasin-type deal. But you’ll see him everywhere on the field. He lets his legs do the talking. “He commands a lot of respect with the size he has but he’s very humble and he wants to be the best teammate he can be and he’s all about making everyone around him better. He can score when he wants to but he can also make that great pass to an open teammate.”

Bradford has excelled just as much in the classroom as he has on the field. He is a straight-A student with a 4.4 GPA in a curriculum that has included 10 honors and seven advanced placement courses. He is a member of the National Honor Society and involved in many extracurricular activities.

Bradford is a member the Loyola Green Club and serves as an afternoon tutor at the Renzi Center, a free after-school program that primarily serves students from underperforming schools and/or low income households through the National Honor Society.

He also works with F.A.I.T.H — Flyers Aiding the Hungry, whose mission is feeding and gifting disadvantaged families during the holidays. In conjunction with the American Millennium Project, he helped establish a school organization that teaches local history and culture through adventure tours and field trips.

If that’s not enough, he has also found time to work at the Patrick Jackson Law Firm in Bossier. He also works as a volunteer assistant coach with the River Cities/FTK Lacrosse organization.

Currently, he has 14 college acceptance letters and over $1 million dollars in mostly academic scholarship offers.

Bradford hasn’t decided where he will continue his education and play lacrosse. He plans to major in economics and attend law school.