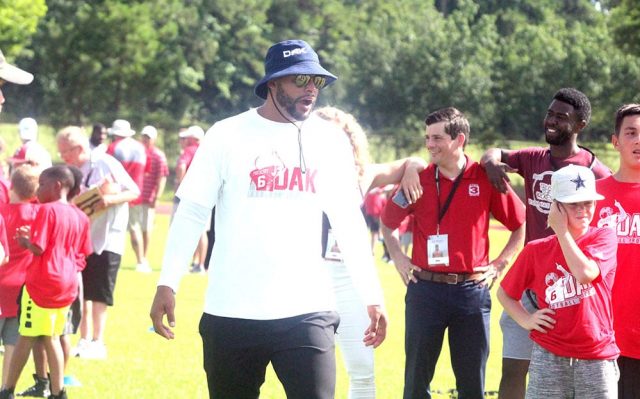 FRISCO, Texas — Quarterback Dak Prescott is the Cowboys’ nominee for the Walter Payton NFL Man Of The Year Award presented by Nationwide.

Considered the league’s most prestigious honor, the Walter Payton NFL Man of the Year Award recognizes an NFL player for outstanding community service activities off the field, as well as excellence on the field. Each of the league’s 32 nominees were announced Tuesday.

As a nominee, Prescott will wear a Walter Payton NFL Man of the Year helmet decal through the end of the season in recognition of his accomplishments on and off the field.

“I am extremely humbled and honored to be named the Dallas Cowboys’ Walter Payton NFL Man of the Year candidate, especially in light of all of the great things my teammates are doing in the community,” said Prescott. “I am proud of the work that my Faith Fight Finish Foundation is doing to support those facing adversity and the programming being developed to help those individuals, families and communities find strength for a better future. If I can be the catalyst for conversations to be started or someone to seek help when they are feeling alone, I see that as a great purpose.”

Overcoming adversity and striving for excellence is what motivates Prescott on the field and in the community through his Faith Fight Finish Foundation. Prescott entered his sixth NFL season in full health, picking up where he left off after suffering a devastating ankle injury that required surgery in 2020. He has led Dallas’ high-velocity offense towards multiple wins and earned Offensive Player of the Week honors in Week 6.

After the loss of his brother to suicide in 2020 and a desire to make an impact on social justice causes, Prescott has a renewed purpose towards helping others and expanded the original mission of his foundation to not only raise funds and awareness for cancer, but to tackle suicide prevention and mental health and to bridge the gap between law enforcement and the communities they serve.

“Dak Prescott is an awesome example of the great things that professional athletes can do off the field,” says Charlotte Jones, Dallas Cowboys Executive Vice President and Chief Brand Officer. “Since Day One, Dak has used his platform to help make a difference for others. Whether he is working as a cancer advocate, bringing youth and police together for honest conversations or simply writing ‘Ask 4 Help’ on his taped wrist for fans to see on television, Dak wants to be an inspiration to others.”

Prescott and the Faith Fight Finish Foundation (FFF) have worked tirelessly to align with trusted partners to implement solutions to the issues plaguing our nation. In the wake of the senseless murder of George Floyd, Prescott lent his voice to the dialogue, penning a op-ed in which he vowed to take action to rid communities of racism, racial-profiling and hate. He pledged one million dollars to police training, education, and advocacy. Since that time, FFF has worked to build trust between law enforcement and the communities they serve and protect, by forming the Law Enforcement Steering Committee (LESC) comprised of youth, community leaders and law enforcement personnel that addresses systemic racism through education and advocacy.

FFF is also working to bring the CYCLE training program to communities across the country, delivering law enforcement officers a high-level curriculum specifically created to transform police interactions with community members – especially young men of color in underserved areas. At Prescott’s insistence, the police and community training were enhanced to include modules on mental health awareness and community service.

Mental health awareness became a cause Prescott began championing after losing his brother, Jace, to suicide during the isolation of the Covid-19 pandemic. Prescott’s promise is to make sure that Jace’s live will be “a life taken to save millions.” Through collaboration with NFL players Soloman Thomas and Hayden Hurst, Prescott and FFF are sponsoring programs created to teach educators to connect with students in crisis and identify the signs of depression and mental illness. Additionally, FFF has partnered with the Kevin Love Fund to support Social Emotional Learning programs which focus on destigmatizing emotions that are often labeled as “negative” and raising awareness for mental health, so youth know they are not alone in facing challenging emotions.

The winner will be announced during NFL Honors, which airs the Thursday before Super Bowl LVI on ABC.

Prescott has been actively involved in a number of important initiatives through his Faith Fight Finish Foundation, including cancer awareness, social justice and mental health.