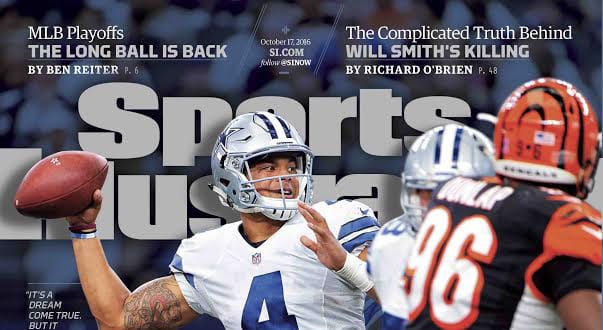 Former Haughton star Dak Prescott had perhaps his worst game as the starting quarterback for the Dallas Cowboys Sunday night.

But he came through in the clutch against East division rival Philadelphia.

Prescott led the Cowboys on a 90-yard, game-tying touchdown drive in the fourth quarter. The game ended tied at 23 in regulation.

The Cowboys won the overtime coin toss and got the ball first. Prescott then hit five passes on a 75-yard, game-winning touchdown drive.

On the 5-yard TD pass, he rolled left to avoid the rush and found Jason Witten all alone in the end zone.

The 29-23 victory was Dallas’ sixth straight. The Cowboys improved to 6-1 overall and lead the Eagles and New York Giants by two games in the East.

Prescott completed 19 of 39 passes for 287 yards and two TDs. He had one costly interception in the end zone near the end of the first half.

Prescott also rushed for 38 yards on seven carries and scored on a 7-yard run in the first quarter.

On the game-tying drive, Prescott completed five passes, including a 22-yarder to Dez Bryant for the TD with 3:04 remaining. He also had a 12-yard scramble.

In overtime, he completed a 24-yard pass to Cole Beasley to the Eagles 37.

On fourth-and-1 from the Eagles 28, he got the first down on a 2-yard sneak. One play after an Ezekiel Elliott 12-yard run, Prescott hit Elliott for 10 yards. On second-and-goal from the 5, he floated a pass to the wide-open Witten.

“That’s what he’s demonstrated since Day 1,” Cowboys coach Jason Garrett said of Prescott in his postgame press conference. “Just be able to handle any situation with poise and composure.

“He plays with same mentality, the same demeanor, the same temperament, regardless of what’s happened before. The best players I’ve been around are able to do that. He was outstanding at the end of this ballgame.”

Prescott said he wasn’t on his game in the first half and at times throughout the game.

“Not a great half by me, a little sloppy there in the first half and kind of throughout the game at times,” he said. “I’ve got to be better and more consistent.”

“It was a great team win. All credit to the defense for giving us an opportunity to win.”

After the game, Cowboys owner/general manager Jerry Jones announced that Prescott will be the starter in Sunday’s game at winless Cleveland with Tony Romo still on the mend.

For the season, Prescott has completed 144 of 221 passes for 1,773 yards and nine touchdowns with two interceptions.