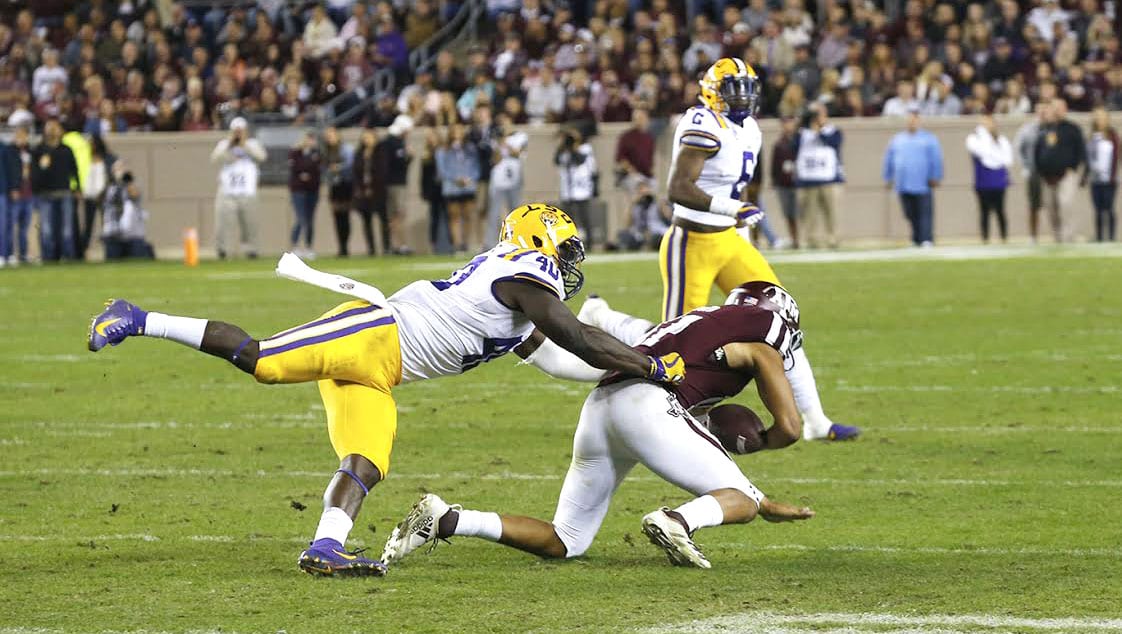 Continuing the tradition of having some of football’s most recognizable names speak at the annual Kickoff event, former North Webster and LSU star linebacker, and fifth-overall selection in the 2019 NFL Draft, Devin White, will be the featured speaker at the 2019 Walk-On’s Independence Bowl Kickoff Dinner.

The annual Kickoff Dinner is set for Thursday, July 11 in the Captain Shreve Ballroom of the Shreveport Convention Center. Dinner will be served at 6:00 p.m., and the program will begin at 6:45 p.m., with a Q&A between White and “Voice of the Tigers” Chris Blair and a brief Q&A with the audience at approximately 7:15 p.m. Doors for the Shreveport Convention Center will open at 5:30 p.m.

Individual tickets for the Kickoff Dinner are $50, while tables for eight are $400 apiece. Tickets can easily be purchased online at WalkOnsIndependenceBowl.com or by calling the Walk-On’s Independence Bowl office at (318) 221-0712 or toll free at (888) 414-BOWL.

“Following Devin’s football journey from North Webster to LSU to now the NFL and watching the passion and joy he displays playing the game has been a lot of fun.  He brings that same passion and joy to everything he does in life,” said 2019 Walk-On’s Independence Bowl Chairman Art Carmody IV. “We are excited that he is spending this evening with us at our Kickoff Dinner as he prepares for his rookie season with the Tampa Bay Buccaneers.”

White’s journey to stardom began in Springhill, La. at North Webster High School, where he was a two-way star at running back and linebacker. The former four-star recruit rushed for 1,650 yards and 31 touchdowns his senior year, and he finished his high school career as Louisiana’s 12th-rated prospect with 5,031 rushing yards, 81 touchdowns and 192 tackles.

Following his impressive prep career, White chose to stay home and attend his home-state Louisiana State University. As a true freshman, he appeared in all 12 games and earned Freshman All-SEC honors. His breakout game came in a 29-9 win over Louisville. White tallied five tackles, forced a fumble and sacked Heisman Trophy quarterback Lamar Jackson for a 19-yard loss.

White quickly became a household name across the college football landscape during his sophomore year at LSU. After posting 133 tackles during the campaign, he earned second team All-America honors and first team All-SEC honors. His 133 tackles ranked him second in the SEC, and he became the first LSU player to lead the SEC in tackles per game since the mid-1980’s, averaging 10.2 tackles per game.

After becoming one of the best linebackers in the nation in 2017, White once again enjoyed a special season in his junior year. He led the SEC in total tackles with 123, while also adding 12 tackles for loss and three sacks. White was recognized across the nation as the best linebacker in college football, as he became LSU’s first winner of the Butkus Award as college football’s top linebacker. He also earned recognition as a consensus All-American, earning first team All-America honors from Walter Camp, Associated Press, Sporting News and the American Football Coaches Association.

White was a tremendous leader and ambassador for LSU football, as he was twice named permanent team captain in 2017 and 2018. Following his junior season, White announced his intent to enter the 2019 NFL Draft, leaving Baton Rouge as one of the best players to sport the purple and gold. On April 25, 2019, the Tampa Bay Buccaneers made White the highest drafted linebacker in LSU history when they took him with the fifth overall selection.

Chris Blair, “The Voice of the Tigers,” joined the LSU Athletics Department on December 7, 2015 and serves as the radio play-by-play broadcaster for the LSU Tigers football, men’s basketball and baseball teams. His first football season at LSU was the 2016 season, and his first men’s basketball season was the 2016-17 season. Blair, a native of Hindman, Ky. and Lander University alumni, served as the radio voice of the Georgia Southern Golden Eagles for 10 seasons prior to departing for Baton Rouge and has also handled broadcasting duties for the Clemson Tiger Sports Network and Lander University.