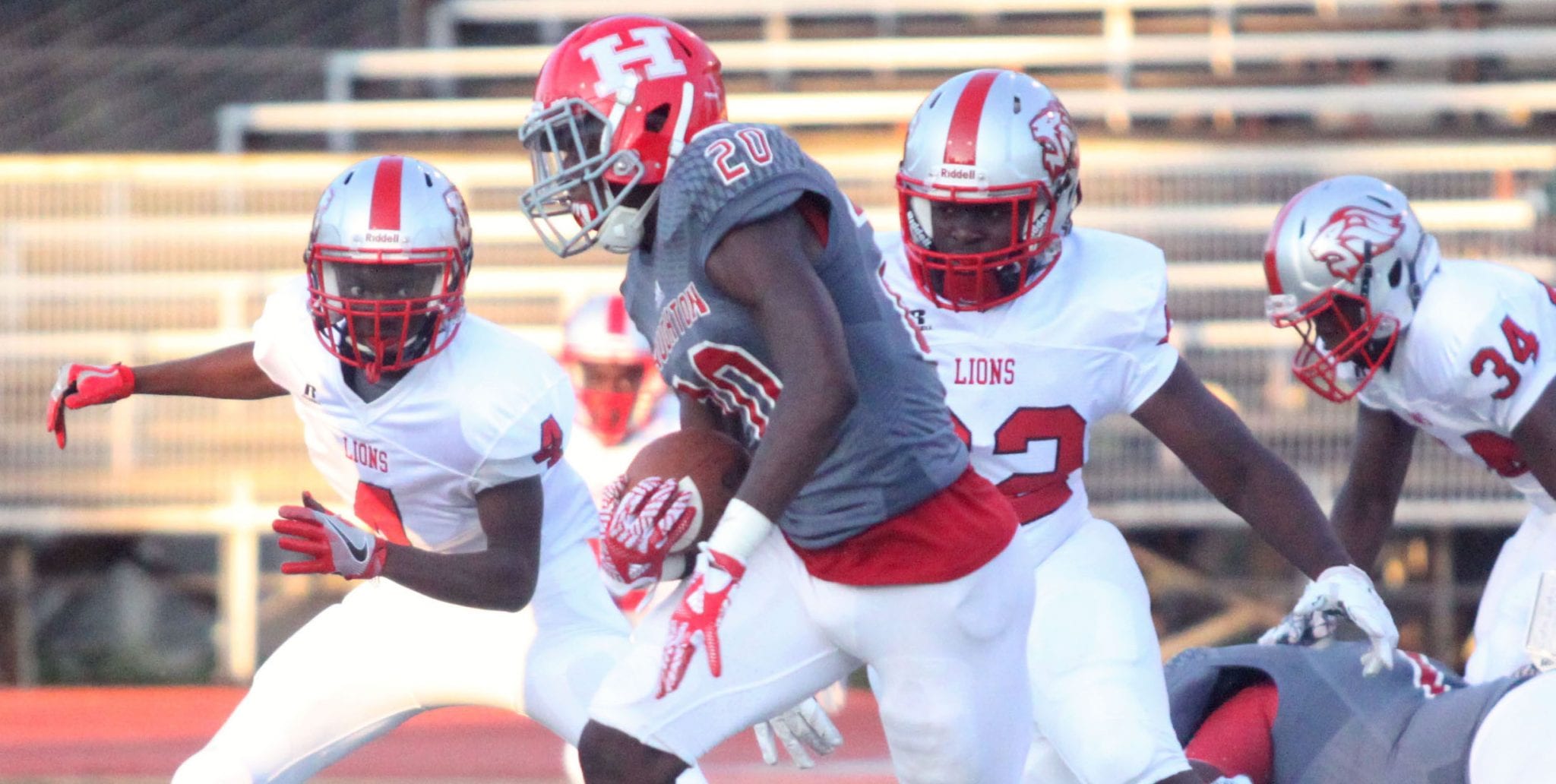 To be a really successful high school football team, it helps to have a gamebreaker, somebody that can make a big play from anywhere on the field.
Most teams are fortunate to have one. The Haughton Buccaneers have three — senior Josh Lister and juniors Lavonta Gipson and Kynan Hayes.
All three were members of Haughton’s Class 5A state champion 4X100-meter relay team last spring. Along with now graduated Antonio Woodfork, they ran a 41.44 at LSU, beating runner-up West Monroe by a wide margin.
Gipson and Hayes are running backs. Lister is mainly a receiver, but he also will take a pitchout or direct handoff from quarterback Pryce Curry on occasion.
Haughton is off to an 2-1 start after defeating Woodlawn 40-6 last week. The Bucs host Green Oaks on Friday night.
“That’s the one thing we know we’ve got,” said Jason Brotherton, who served as the head track and field coach before becoming the head football coach. “We’ve got guys on the field that can make a big play at any point. Give ’em the ball. Every time Lister touches the ball it could be a touchdown. Kynan’s the same way.”
Gipson may not have the same blazing speed as Lister and Hayes, but he’s also hard to catch in the open field.
“You feel you’ve always got a chance to score,” Brotherton said. “Even when things aren’t going well you’ve got the chance to make that one big play and get right back in it.”
Gipson was mainly a linebacker last season and is still playing that position. He also plays special teams and rarely comes off the field.
“He doesn’t ever want to come off the field, so you’ve got to have a certain mentality to do that and he has it,” Brotherton said.
Lister is the first player in school history to be nominated for the US Army All-American Bowl. He swept the District 1-5A and regional 100-meter dashes last season and had the fastest time in the state. But he missed a chance at winning the 5A title with a false start in the state meet.
It takes more than speed, though, to be an effective receiver. Lister has learned that the last couple of years.
“He’s had great speed since he’s been with us, but he’s a better overall, all-around football player now,” Brotherton said. “Last year, he was a guy really fast playing receiver. Now, he’s a receiver. He runs routes better. He catches the ball better. He’s just gotten better at the little things that it takes to get really good at the position.”
Hayes is seeing his first extensive varsity action this season.
“He’s dynamite in a bottle,” Brotherton said. “He’s got good lateral movement, is able to start and stop, accelerate real fast. He’s a different kind of running back, more of a scatback kind of guy that’s going to look to bounce outside. Lavonta is more of a power back.”
Senior Duncan Smith is another outstanding track athlete. He is the reigning 400-meter Bossier Parish champion in the 400 and was runner-up in the District 1-5A meet. A three-year starter at outside linebacker, Smith was moved to safety this year. He is also capable of carrying the ball.
“When we switched to a 3-4 (defense), we were just thin in the secondary and he’s a versatile guy,” Brotherton said. “And a team guy. He said, ‘Coach, I can do it. I’ll play back there.’ That kind of speaks to his unselfishness a little bit. He’s learning the position, but he’s going to get it.”
Those four aren’t the only track athletes on the football team. Haughton has dominated 1-5A boys track, winning the title the last three years and four of the last five. While that hasn’t translated to dominance on the football field, it has helped the Bucs be successful.
Running track obviously helps the players stay in shape and improve their speed. Gipson, Lister and Hayes have developed teamwork skills running the 4X100 where one poor baton handoff can be disastrous.
“Track’s an individual sport other than that relay and those guys work hard on it,” Brotherton said. “They take pride in that relay. We’ve been good the last four or five years.
“They kind of trust each other. They do that together. I think the camaraderie is already there with those guys because of what they do in track.”
They also know what it feels like to perform in a pressure situation on a big stage.
“All three of those guys, they competed in the state meet and that’s a big crowd and a pressure-packed atmosphere,” Brotherton said. “I think it helps them from that standpoint to compete.”

NOTE: Look for the Friday Night Mix, with information on all six Bossier Parish teams, inside the print edition of The Press-Tribune every Wednesday during football season.