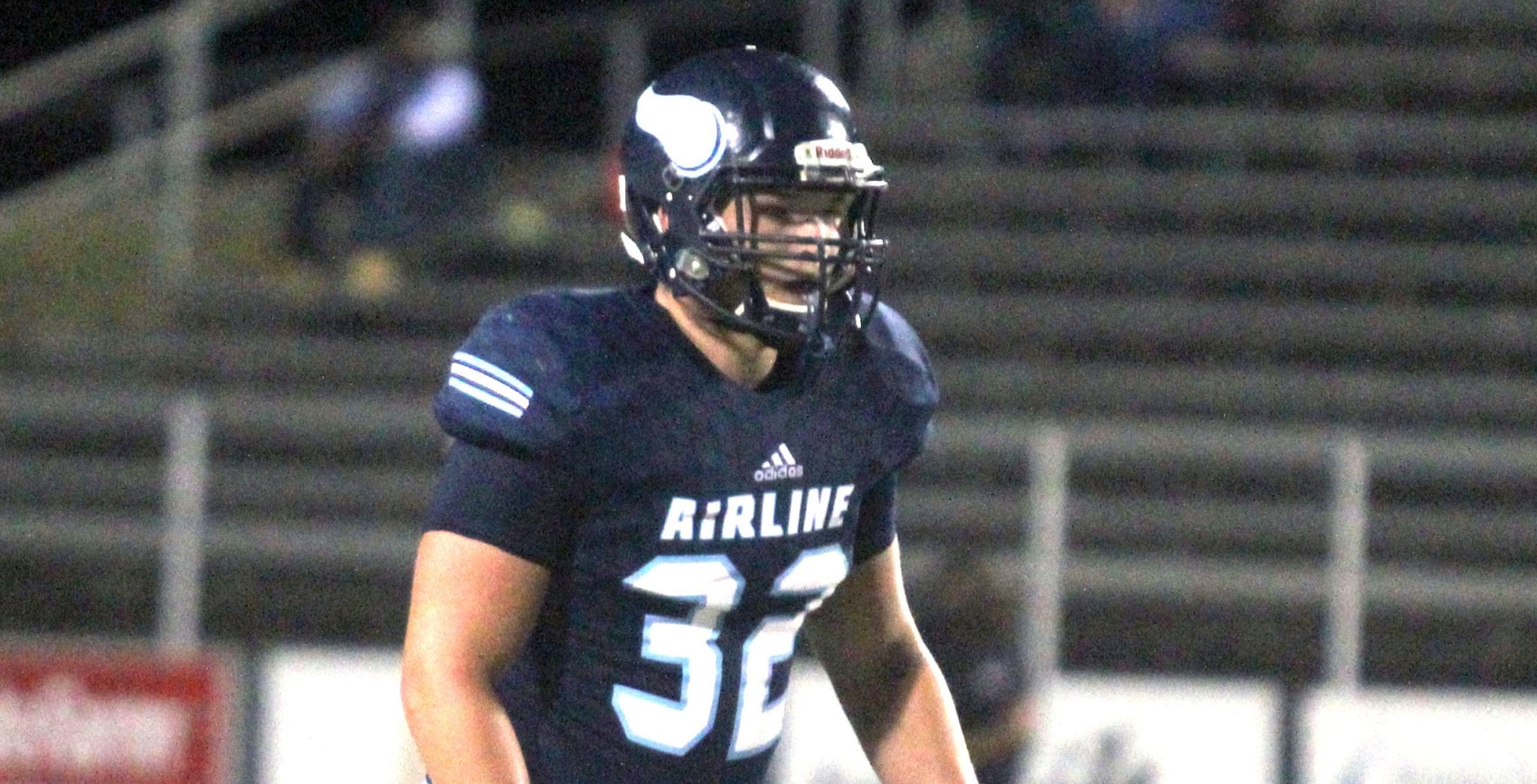 With eight starters returning, Airline head coach Bo Meeks figured he would have a very good defense this season.
So far, the Vikings have proven him right. Through the first six games, the first-team defense has allowed just three touchdowns.
Airline improved to 5-1 with an 44-0 non-district victory over Mansfield last week. The Vikings return to District 1-5A action against parish rival Haughton (4-2) on Friday night at home.
The Mansfield game was Airline’s third straight shutout.
“I think that everything we hoped they would do they’ve done,” Meeks said.
Meeks gives much of the credit to his defensive coaching staff led by coordinator Seth Stowell and including Bryan Taylor (safeties), Schirra Fields (cornerbacks) and Chris Knotts (line).
“Coach Stowell has done an unbelievable job of tweaking the system to fit our personnel and just coming and coaching it hard every day and getting those guys to buy in and play with passion and energy,” Meeks said.
Senior inside linebacker Josh James, a three-year starter, said Stowell’s guidance has been key.
“Coach Stowell has really put the pressure on the defense this year — just the way we practice, the intensity of it and how physical it is and his gameplans.”
Meeks said the Vikings have several leaders on defense, but James stands out.
“Josh is a great player and he’s really figuring out how to play in this defense,” he said. “He’s making a lot of tackles and a lot of plays, but the thing about Josh that’s even better than that is the leader he is for us. We’ve got some pretty good leaders over there, but he’s the guy that’s going to get everybody straight and ready to play on Friday night.”
James calls the defense a “band of brothers” who are close off the field. Airline doesn’t have tremendous size, but the Vikings make up for it with speed and quickness.
Airline rotates several players on the line. Drew Brewster has been a playmaker there for two years, Meeks said. Courtney Turner, Jordan Cowthorn, Josh Smith, Steven Rainey and Anthony Durgin have also excelled.
The outside linebackers are Zylon Newson, Darrell Evans and Davaria Glover. The secondary includes Jaylyn Thomas, Harvey Calhoun, Phillip Lee, Bryson Vance and D’Kameron White.
“All those guys are playing hard,” Meeks said. “There are no weak links over there and I’m really proud of the job they’re doing each week.”
James comes from a football family.
His older brother Jacob was a successful quarterback at Airline who came close to leading the Vikings to an upset of Brandon Harris-led Parkway his junior season. Jacob, now a walk-on at ULM, sat out his senior football season and focused on baseball after suffering a fully torn labrum late in the 2013 season.
His father, Justin, was a longtime coach at Greenacres and coached both both Jacob and Josh there.
The youngest James, Eli, is a two-way starter for the seventh-grade Cope Cougars.
Justin James is in his first year as an an assistant principal at Parkway. Before the season, Josh joked that there is now “an enemy” in the house.
He credits both Jacob and father for the player he has become.
“I get most of the physical side of myself from my older brother,” Josh said. “No matter what we did, if it was seeing who could get the food first or going to get the ball that my dad threw, if it was wrestling or a video game, we went at it in everything we did.”
Most nights Josh and his dad review video on Hudl.
“Every night we’re on Hudl for 30 minutes, if it’s watching practice or the next opponent,” Josh said. “He’s always helping me out.”
Airline had a solid defense last season, but James believes the Vikings are playing at a higher level now.
“I would just say that we have a different mindset,” he said. “We were good last year. But this year I think all the guys just really bought it. If it’s the film (work) that we do Sunday or the film we do at 6:50 in the morning we’re just bonding and ready to get after it.”