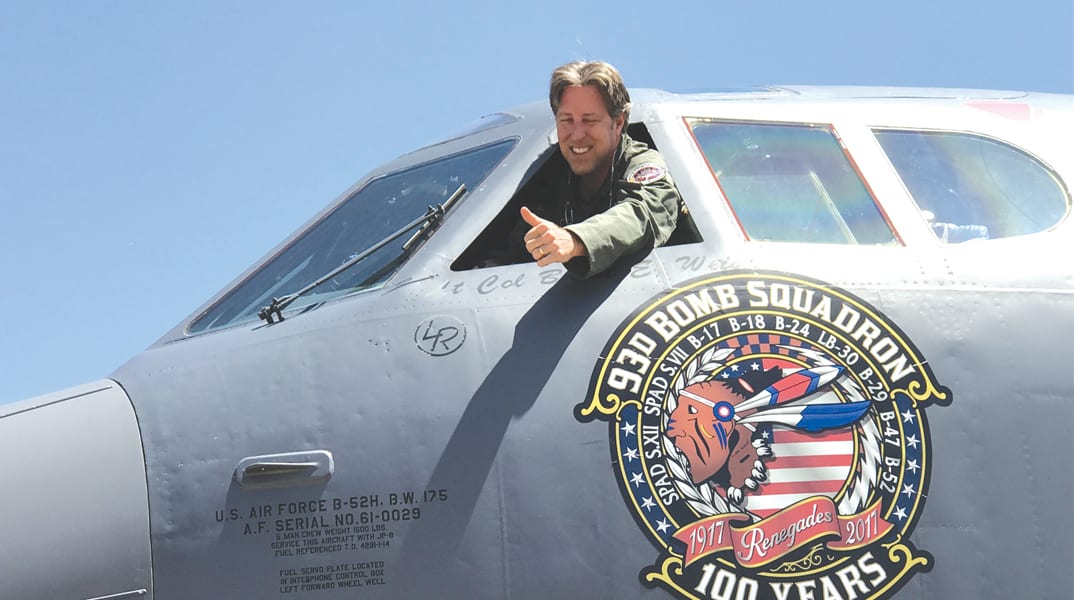 Margaritaville GM Barry Regula had the unique opportunity to step outside the casino to fly in Barksdale Airmen’s boots Friday.

Regula was named the 93rd Bomb Squadron’s first ever honorary commander back in December, and his two-year tenure began Friday by joining the 93rd BS for his first flight on a B-52.

Regula was thrilled by not only the flight, but the significance of serving as honorary commander in the nearly 100-year history of the 93 BS.

“This gave me the opportunity to see these guys in action and the conditions they work under, and see the quality and camaraderie that goes on at Barksdale. I can take that back to the community and other community leaders,” he said.

The idea behind the program is to have a liaison in the community for the squadron and its parent wing, the 307th Bomb Wing, and then share ideas between other community leaders to strengthen the area’s military relations.

“We are honored and humbled he’s taken this opportunity to be our honorary commander,” said Lt. Col. Brent Weisner, commander of the 93rd Bomb Squadron. “We want Barry to know what we do so he can go out to the community and spread that word, so they not only know what we do, but so we know what we can do to help the community.”

The program was born during a civic leader flight last year when Regula met with Col. Bruce Cox, Commander of the 307th Bomb Wing, and discovered how much the military values community support.

“I was so impressed with everyone I met. Anyone can learn something about service from how (Barksdale) treats visitors — everyone from the top commander down to the person emptying the garbage makes me feel more important than I deserve,” Regula said.

That support is something that he clearly feels strongly about as his business has done its part with Regular pointing out Margaritaville helped “wow” the inspectors for the Commander in Chiefs base of Excellence award that Barksdale won this March and also helped sponsor the subsequent celebration picnic on base when the award was announced. Margaritaville also supports the Airman of the Quarter program at Barksdale, is hosting the Military Appreciation Breakfast in May, and works with the 307th bomb wing to support charities such as the Shriners and St. Judes among other events.

“We are bringing the Traveling Vietnam Memorial wall to Bossier City June 8 through Flag Day to honor fallen servicemen from the Vietnam era. And in the fall we will be hosting the 100th anniversary of the 93rd Bomb squadron, the best squadron in the Air Force,” Barry added.

With an economic impact of $1 billion, a payroll of almost half million dollars, and 17,000 military and civilian jobs, Barksdale is vital to the area. Which makes that support all the more important.

“All those jobs represent a spouse and family who is supporting our local businesses, our churches, our schools. When you have this culture of excellence, there’s an intangible effect on your society,” Regula explained.

Lt. Col. Weisner commands a bomb squadron comprised of active duty reservists, meaning they are active in the community outside BAFB when not on duty. He offered his unique perspective to say, “Barksdale plays a unique role in defending our nation, we have airmen currently deployed defending the nation. We have to remember we couldn’t do our mission if it wasn’t for our civic leaders and the community. A lot of our families not only live in Shreveport-Bossier, but the actual member works at a local establishment. So we all have to work together to make our community successful.”

Lt. Col. Weisner said that means that the community can support Barksdale by being there and that airmen look for ways to get involved in the community.

“This community bends over backwards for every airman. But it’s a two-way street, we always look to see what we can do to help them,” he said. “This community is second to none.”

Regula, who had just literally walked the walk, echoed that sentiment by saying, “That’s something you’ll find throughout Bossier City — we’re all in for Barksdale.”