Bossier City police have arrested a woman wanted by the United States Army for desertion. 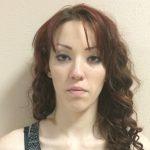 Atkins was not charged in connection with that investigation however a woman she accompanied to Bossier City – 20-year old Berkley N. Bartosiewicz of Amarillo, Texas – was arrested on a charge of prostitution.

During their investigation officers found that Atkins was wanted by the U.S. Army for desertion from Fort Knox, Kentucky.

Atkins booked into the Bossier City Jail and will be placed in the custody of military authorities.