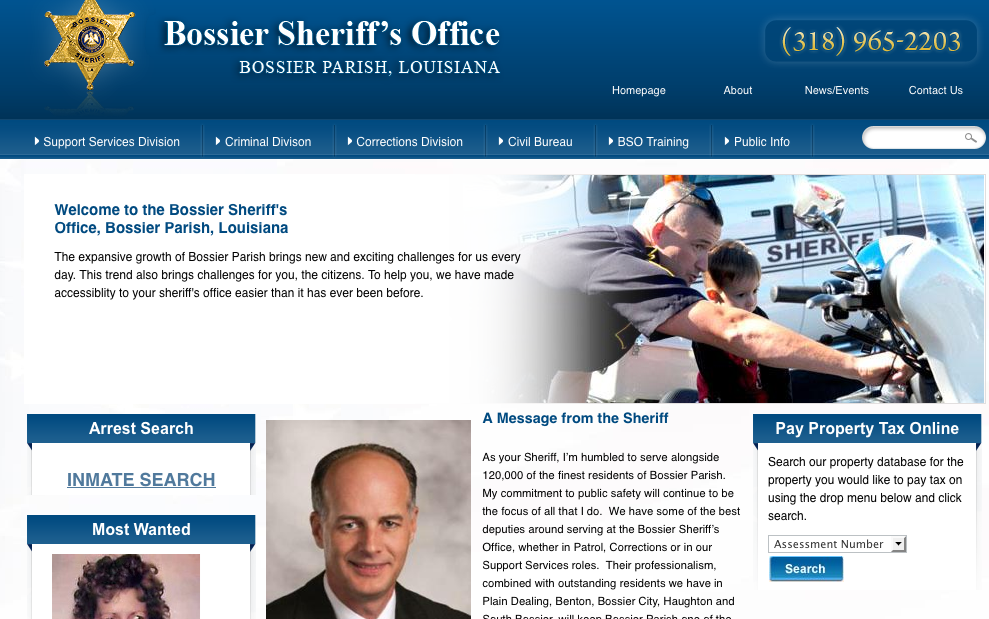 The Bossier Parish Sheriff’s Office has been denied federal funding for its mention of God and use of religion in the Young Marines and Youth Diversion programs.

Sheriff Julian Whittington received notice that funding would be restored only if he signed a letter “pledging that no prayer or mention of God would be allowed” in the programs. However, Whittington said he is appalled by the government’s decision and refused to sign the letter, forgoing the $15,000 grant award.

Instead, he has written his own letter and is now trying to save the program’s existence in Louisiana.

Whittington writes, “As Sheriff of Bossier Parish, I will never sign the requested letter preventing these ‘inherently religious activities’ from being part of our program.”

In his letter to state delegates, including Gov. Bobby Jindal, Senators Mary Landrieu and David Vitter and Congressman John Fleming, Whittington said the situation arose when someone in the Department of Justice, Office of Civil Rights, in Washington, D.C., objected to allowing voluntary prayer and the mention of God in the Young Marine Obligation, which is recited aloud at the beginning of the program.

The Young Marines Obligation states, “From this day forward, I sincerely promise, I will set an example for all other youth to follow and I shall never do anything that would bring disgrace or dishonor upon God, my Country and its flag, my parents, myself or the Young Marines. These I will honor and respect in a manner that will reflect credit upon them and myself. Semper Fidelis.”

When it comes down to it, though, Whittington said this isn’t a situation that effects just Bossier Parish youth.

“This is an American issue,” he said. “How do they think they can do this? Now you’re telling me that we can’t have voluntary prayer or even mention the word God?”

“Enough is enough,” Whittington said. “I don’t work for people in Washington. I work for the people of Bossier Parish and the majority of people in Bossier feel the same as I do. What we are asking for is certainly not infringing or forcing anyone to do anything. We are not lining people up against a wall and forcing them to pray. It has always been a volunteer led prayer.”

The Bossier Sheriff’s Young Marines program is a free service to Bossier Parish youth, ages eight to 18, with a focus on character building along with strengthening core values, such as discipline, leadership, teamwork and commitment. The program is instructed by a Bossier Parish Deputy, who is a former U.S. Marine, and several active U.S. Marine volunteers. Whittington’s letter also states that the program has successfully graduated more than 1,000 juveniles since 2002.

For the past several years, the Young Marines program has been partially funded by the Juvenile Accountability Block Grant (JABG) provided by the Louisiana Commission on Law Enforcement (LCLE). If the government’s decision is not reversed to allow voluntary prayer in the program, Whittington said the programs will continue on without the government’s support. Whittington said the approximate cost to fund both programs is approximately $30,000.

“This program has had prayer that has been led by teens who are in this program, and when it hasn’t been led, they had a moment of silence,” Peacock said. “But now they are being told by our federal government, by the Department of Justice, that there can be no prayer activity or they will not fund this program.”

Peacock now wants Louisiana’s congressional delegation to look into why the federal government cut off funding for the Sheriff’s Office program. Whittington’s next concern is that other programs in the state will either have to sign the letter and comply with the government’s request or they will fold their programs due to a lack of funding.

“Even though we are resourceful here in Bossier, there are a lot of other agencies that can’t make it without government aid,” he said. “These are great programs and I hope they can find ways to move forward from here.”

Whittington said he will continue pursuing the youth programs in Bossier Parish on the grounds in which they were initially structured.

“There’s nothing to work out. This is our plan and we aren’t going to compromise,” he said. “We hope they understand our position because it’s not up for debate. This is how we will do our program.”