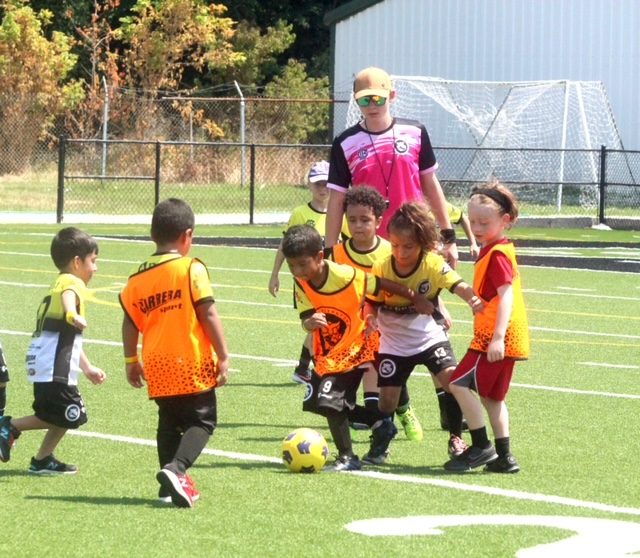 In most of the Western Hemisphere the sport of soccer is called futbol.

And futbol has taken center stage at Bossier High School this week.

The weeklong Bossier Campamento de Futbol, a soccer camp for children, got underway Monday. The camp is a joint venture between Bossier High and the Casa de Portiva Cumbre Alta club of Quito, Ecuador.

Matt Keifer, a Shreveport native and 2003 graduate of Byrd, is the director of the club. He and his wife, April, run it as part of a Christian ministry they began in 2019.

Eight players from the club’s men’s team that plays in Ecuador’s second division made the trip and have been running the camp.

Bossier boys soccer coach Orlando Medellin said there were discussions about having a camp of this nature before the start of the COVID-19 pandemic.

He said he and Doug Scott, then a Bossier assistant principal, were talking about ways Medellin could continue to improve the Bossier boys program.

“He mentioned to me he knew some people from Ecuador and they had a professional team and that’s sort of how everything started,” Medellin said.

Scott, now the Supervisor of Technical Services for Bossier Parish Schools, had attended Celebration Church with the Keifers, Medellin said.

In March of this year, Medellin got a call from Matt Keifer and then talked to Scott again. They discussed whether or not a weeklong camp was feasible.

There were several issues that needed to be worked out not the least of which was to get sponsors on board to defray the cost.

Keifer, an insurance salesman before making the move to Ecuador, said he first got the idea of a camp after asking a local Hispanic pastor how he could help the community.

“He said can we try to do a soccer camp for the Hispanic community,” Keifer said. “I said, ‘Let’s see what we can do.’ I tried to make a couple of phone calls to see what kind of interest we can get, how much excitement we can get. And then even more importantly do we have the sponsors to pull it off.”

While any child is of course welcome to participate in the camp, it is primarily directed at the large Hispanic community in the Bossier High area.

One thing Keifer was adamant about was that the camp be affordable.

“I was born and raised here in Shreveport but I was considered a poor kid and I didn’t play soccer for that reason,” he said. “Soccer was way too expensive for me to play. I loved the game but I just couldn’t afford to play soccer.

“So my idea really for this camp was to find enough sponsors, get the community involved where we could get something affordable for the families. And really $20 is all we charge and they probably got $80 worth of stuff. For us it was really just to try to get the people to come.”

Keifer said it didn’t take long to generate excitement for the camp.

Dr. David Googe is a surgeon affiliated Orthopedic Specialists of Louisiana and a longtime friend and supporter of Bossier High.

“Dr. Googe called me one day and he was like, ‘Now how are you affording a professional team with a camp for $20 a week?’ I said, ‘Hey, this is what happens when you get the right people next to you.’ ”

Of course, Googe offered his help.

“It’s just amazing the willingness to help the people of the community,” Medellin said.

Googe, who downplayed his support of the camp, was at Bossier around noon Wednesday. The camp was winding down for the day and a group of young campers were in a huddle in the end zone of Memorial Stadium chanting together in Spanish.

Googe has been coming to Bossier to do physicals for the sports teams for 15 years.

“The demographic has changed,” he said. “It’s become at least a third Hispanic. You have this really beautiful part of our community.”

He then nodded toward the chanting campers.

“Listen. This doesn’t sound like any camp that’s going on now and that’s what makes it  special. You’ve got a local guy, who’s gotten together with other local guys, and they’ve brought in the Hispanic community and said we’re going to make this about y’all.

“It’s not going to be Spanish as a second language. This is what this camp is going to be about, is about having an opportunity for kids who speak Spanish to come and have a spot and we’re going to feed you lunch and teach you about Jesus while we’re here.

“It may be not be popular for any press release but that’s the reality of what’s going on here, and it’s just a beautiful picture of the way sports can bring people together.”

Medellin said there were an average of about 100 campers per day through the first three days.

“We have kids that played competitive soccer already, but we also have kids who have never touched a ball in their life and they’re going home and their parents are messaging me, and they’re like, ‘My kids are loving it  and can’t wait. My kids are fighting, like my coach is better than your coach, my coach we do better things.’ I’m glad everybody’s having a good time. At the end of the day it’s about the community.”

Keifer said the players from Ecuador have enjoyed their time in the area.

The heat is not something they are used to now as winter began last month in the Southern Hemisphere.

“It’s hot but fun,” he said. “They don’t experience anything like this. 65 degrees is about the high in Ecuador every day where we’re at in Quito. But they’re having an absolute blast. For most of them this is either their first time here or certainly the first time they’ve been able to come here, move freely and really enjoy themselves and have fun.”

The team played a match against the Bossier High team last Friday and attended a WWE event at Brookshire Grocery Arena Saturday night.

“They’re enjoying the food,” Keifer said. “We’ve met some great people that have really welcomed them with open arms. They are having, I would dare say, the time of their life.

“We played the Bossier High School boys last Friday and immediately my guys started talking. They got excited about coaching and building into these young kids that come from varying backgrounds, not only to prepare them for next year’s soccer and get them better with their soccer skills but more importantly build into their lives, encourage them, and let them know people from the other side of the world care about them.’

Medellin wants to make the camp an annual event.

He is thankful for the support of Bossier principal David Thrash and the school’s other administrators and coaches.

“It makes it easy when people work together,” he said.

Holiday Trail of Lights to add two new destinations in 2022