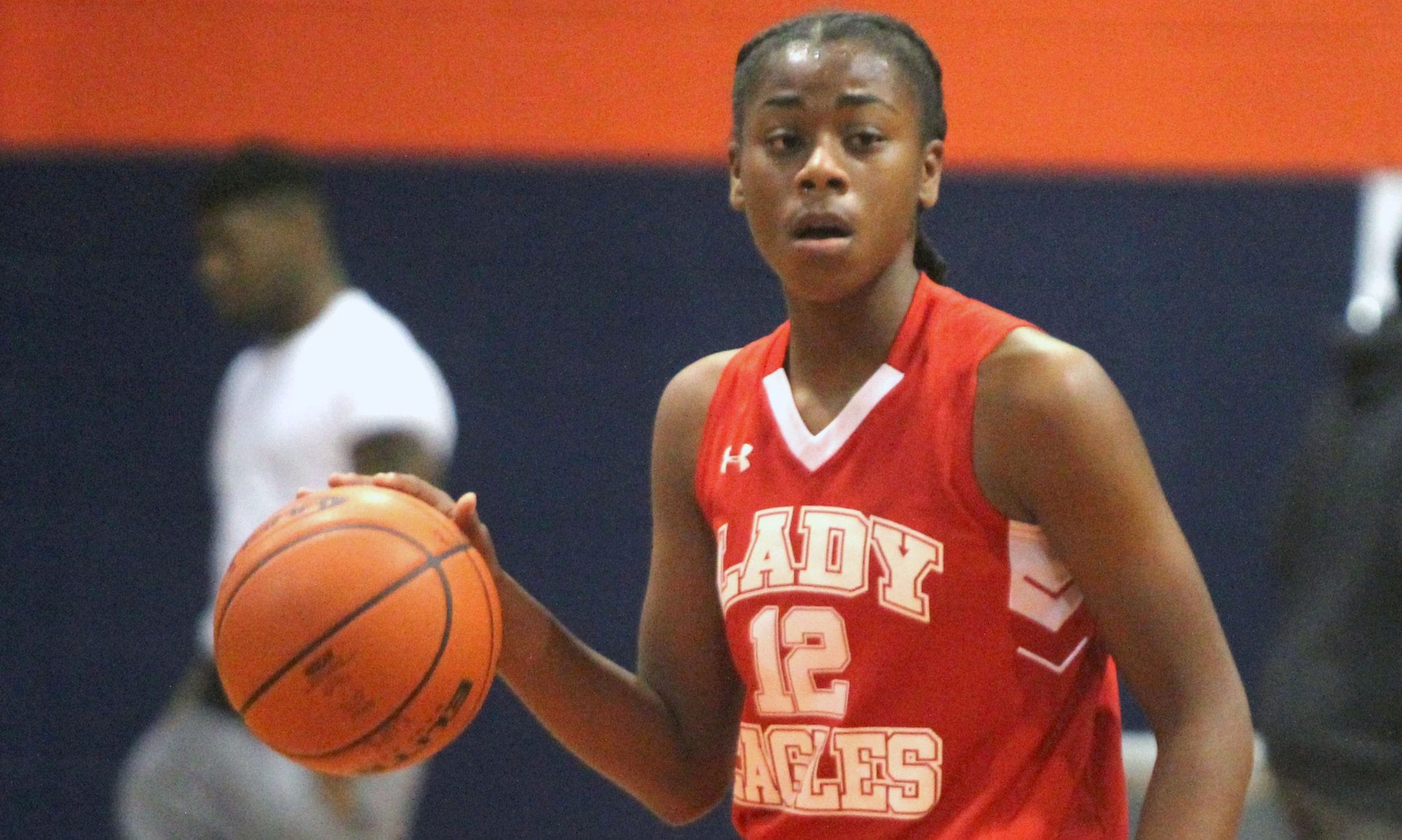 Mikaylah Williams hasn’t played a high school game yet, but she’s already caught the attention of college coaches in a big way.

The 13-year-old Williams admits the attention can be a bit overwhelming at times, but she’s keeping it in perspective.

“I’m appreciative of the opportunities and that the coaches see something in me,” she said.

Williams, the daughter of Patrick and LaTonya Perry Williams, is coming off a stellar middle school career at Elm Grove.

Williams led the Lady Eagles to a 20-0 district record in two seasons.
In track and field, all she did was win multiple titles in the pre-district and district meets. Last spring, she won the high jump, shot put and discus in the district meet at Benton.

But it’s on elite travel ball teams where players as young as Williams get noticed. She plays for the Houston-based Texas Bombers softball program and the Arkansas-based Mavs Elite basketball program.

Williams’ mom, a teacher at Bossier High, and dad, a supervisor at FedEx, help their daughter stay grounded amidst the attention.

“We just try to tell her that there are a lot of people who would like to be in her shoes,” LaTonya Williams said. “Just remain humble. Just let them know you’re working with what the Lord gave you. As long as you don’t get the big head we’ll be fine.”

Mikaylah said her parents are the main reason she’s been able to accomplish what she has so far.

“All I can say is they give up a lot for me and I really appreciate it of them,” she said. “A lot of sacrifices.”

Mikaylah not only excels on the field and court, she is also a winner in the classroom. At the Elm Grove athletics award banquet, she won the Robbie Fisher award for being a multi-sport athlete with a 4.0 GPA.

On Facebook, her mom wrote that that’s the award she is most proud of.
“Grades are very important because after the last ball bounces you have to have something to fall back on,” LaTonya said.

Mikaylah is already a seasoned traveler. She started playing T-ball at 5 and then joined her first travel softball team at 7.

Next month, she’s heading to Huntington Beach, Calif., with the Texas Bombers Gold for the Premier Girls Fastpitch 14-U National Championship tournament.

Last year, Williams helped the Bombers finish runner-up in 12-U.
She’s also been or is going to Oklahoma, Texas and Colorado for softball and basketball tournaments.

“I do enjoy traveling and love being with my teammates and seeing new places,” she said. “I really like going to California.”

Playing against elite level competition is helping her prepare for her freshman year at Parkway. She plans to play basketball and softball and possibly compete in track and field.

In basketball, Williams is already an accomplished player in all phases of the game and capable of playing just about any position.

But she realizes there is always room for improvement.

“In basketball, I say I have to get in better shape and play better defense,” she said.

She has also played multiple positions in softball. She was named All-District shortstop in seventh grade and second baseman in the eighth.
For the Bombers, Mikaylah started as a catcher before moving to the outfield. As in basketball, she is working to improve her skills this summer.

“In softball, I have to be more consistent,” she said.

Softball was her first sport.

“She started travel softball when she was about seven and that’s pretty much all we had in the area so that’s kind of what she was doing, but she’s kind of getting into the basketball scene a little more seriously,” LaTonya Williams said.

While the basketball scholarship offers are rolling in, LaTonya said Mikaylah remains committed to playing softball at ULL, one of the country’s top programs.

“I was offered after attending a camp at ULL,” Mikaylah said in an interview with the website extrainningsoftball.com. “I committed because I like Coach (Gerry) Glasco and what he is doing with the program.”

According to extrainningsoftball.com, Mikaylah is known as a “baby commit,” which is someone who commits before high school.

Shortly after she committed, the NCAA recruiting rules for softball changed and now prospects can’t commit until on or after June 15 before their junior year.

Bombers coach Steve Jones told extrainningsoftball.com that Mikaylah can hit for power and average and has the ability to play any position except pitcher.

While her focus now is on playing for her travel teams and enjoying the rest of her summer, Mikaylah is looking forward to competing in high school.

In basketball, she will be teaming up with another former Elm Grove star who had a big impact as a freshman in 2017-18, Sh’Diamond McKnight.

McKnight suffered a season-ending knee injury midway through last season but should be ready to go soon.

There will obviously be some adjustments as there are for anyone entering high school.

But with her parents, coaches and teammates to guide and support her, it looks like a bright future awaits.