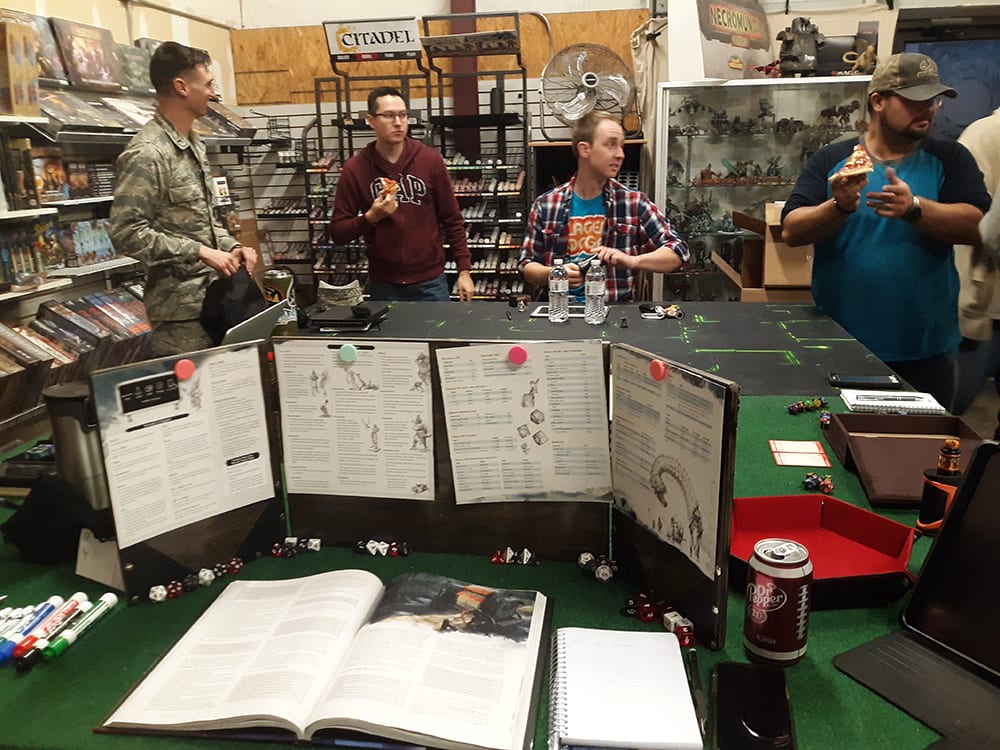 A local store is giving Barksdale Airmen a healthy distraction from the weight of defending the nation.

The Dragon’s Lair War-Games & Hobby Supplies at 1240 Shreveport Barksdale Hwy. in Shreveport frequently has airmen coming in to share in their hobby of role playing games.

“Fantasy role-playing games have the ability to benefit anyone, including the military. I honestly think that’s why I have a lot of military personnel that come into my shop. When you are in the military, you’re bonded in a brotherhood. We can understand each other and share experiences. That’s why I think playing D&D can help you combat the perils and challenges of reality. It calms you. It gets you out of your head,” Iem said.

Growing up before the Internet, smartphones, and social media era, Iem played board games to occupy his time.

“Like most kids at that age, I played board games like Risk, Stratego, Mousetrap, Battleship, Clue, and Monopoly,” said Iem.

Then, in 1974, came Dungeons & Dragons, or D&D. A game that changed everything. D&D introduced rules for fantasy role-playing in a swords-and-sorcery world.

“I first encountered D&D when I was young and it blew my mind,” said Iem. “At that time there was no board to play on. We played D&D with our imagination.”

According to Iem, a player “plays” by describing what your character wants to do. The roll of various dice and the Dungeon Master’s judgment determines the success or failure of any action.

“It’s sort of like reading a fantasy book, but as you read, you get to decide the paths of each character. Best of all, no one knows what happens next. Games can last for weeks, even years,” Iem added.

Iem eventually joined the U.S. Army Reserve in Bossier and served as a medic for eight years after attending college. He took some of the lessons and skills he learned from playing these fantasy games into his college experience and military career.

“When I returned back to playing D&D regularly after serving in the military, I realized role-playing games had provided a powerful coping mechanism. They had saved me, just as I am sure it has saved many others,” said Iem.

1. You’ll get to be part of a team. “Each member plays a part. The same occurs in the real world with your officemates, your family, or other groups when you have to finish a project at work, host an elaborate meal, build a startup, or plan a trip,” said Iem.

2. You’ll learn how to solve your way out of anything. “These role-playing games also help you solve problems. Life is like that dangerous dungeon. You need to be prepared, and you shouldn’t wander through it without the tools to get yourself out of trouble,” said Iem.

3. You’ll gain empathy for others. “In fantasy gaming, you inhabit someone else’s skin. You can choose to be someone like you, or someone not at all like you. The game’s immersive narrative forces you to interact with others. You can’t help but imagine their predicaments and experiences,” said Iem.

4. You’ll tap into your imagination. “While movies, TV shows and video games offer immersive narratives and worlds, they don’t engage the imagination in the same way that D&D does. The game’s crude tools force you to fill in the gaps. You must bring your imagination to the table to complete the picture,” said Iem.

Iem encourages airmen and others in the community to stop by his store and share a game, and form bonds with those around them.

“D&D sparked my imagination and kindled an interest in everything from geography to languages, history to poetry. It made me want to create a better world.”