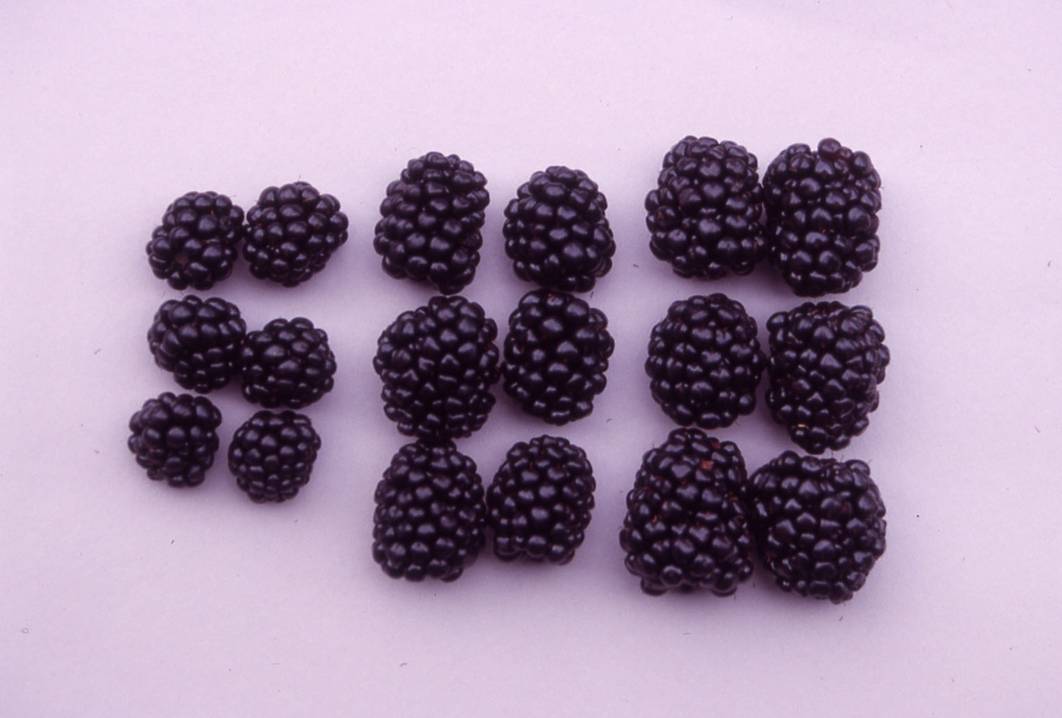 If you picked dewberries or blackberries from the wild as a child (or adult) and miss those wonderful, shiny black fruit bursting with sweet juice, you’ll be glad to know that blackberries are easy and productive in the home garden. Although the dewberry season is over and the blackberry harvesting season is coming to an end, you can still plant them. Here’s some information on planting and home production.

Cultivated blackberry varieties produce larger and higher-quality berries than wild plants generally do. They are divided into two groups based on their growth habit – the erect types and the trailing types. Erect blackberries have arched self-supporting canes. Trailing blackberries have canes that are not self-supporting and must be tied to a trellis for support. Trailing blackberries generally ripen earlier than the erect types, and their fruit clusters are smaller and more open.

One of the recommended erect varieties is Brazos – a large-fruited variety that sets the standard for blackberries. It produces very large, fair-quality, tart fruit that make wonderful pies, cobblers and jelly. Cheyenne, an Arkansas release, produces large, sweet fruit that has a slight raspberry flavor. Brison is a high-yielding Texas A&M release particularly well adapted to south Louisiana with fruit firmer and sweeter than Brazos. Rosborough produces high yields of fruit with smaller seeds and is firmer than Brazos. Shawnee produces its large fruit heavily for several weeks.

If the thought of thorny canes dampens some of your enthusiasm for growing blackberries – they aren’t called brambles for nothing – thornless varieties are available, including Navaho, Arapaho, Ouachita and Apache, which has the largest fruit and highest yield of the thornless types. All of these varieties are erect.

Trailing types are boysenberry, youngberry and dewberry. Boysenberries produce soft, large, tart, reddish fruit – and thornless varieties are available. Youngberries produce a very large wine-colored sweet berry and are of Louisiana origin. The dewberry is the early, trailing “blackberry” that many of us gathered as kids.

Incidentally, raspberries are generally disappointing when grown this far south, and will not produce nearly as reliably as blackberries. The trailing types are best grown on a trellis.

Blackberries are widely adaptable to a variety of soils and will grow equally well around the state. Select a location for them in full sun (eight hours or more of direct sun daily) and with good drainage. Avoid areas where water tends to stand after a heavy rain.

Although weather is hot, blackberries can be purchased and planted now if you will pay careful attention to watering them this summer. This will give you a head start on fruit production next year. November through March is the ideal time to plant blackberries.

Before planting, prepare the bed by removing any unwanted vegetation. This can be done physically by digging out the weeds or turf or by killing the plants with the herbicide glyphosate. (Carefully follow label directions when using herbicides.) Next, turn the soils to a depth of 8 to 10 inches, spread a layer of organic matter such as compost, rotted manure or peat moss over the bed, and sprinkle it with a general-purpose fertilizer following package directions. Finally, thoroughly mix everything together.

The easiest way to grow blackberries is in a row trained like a hedge, with the plants spaced 3 to 4 feet apart. If you plant several rows, space the rows about 5 to 6 feet apart.

Keep the plants well mulched and pay careful attention to watering, especially their first summer. You should water deeply twice a week whenever weather is hot and dry.

Pruning is an important part of blackberry culture, so wear leather gloves when pruning the thorny types. Every spring, blackberry plants send up new shoots from the ground. These canes live for two years. They grow vegetatively the first season, produce a crop of fruit the second year and then die. Old canes that have produced fruit that has been harvested should be cut off at ground level, generally by late June, and disposed of. Blackberry plants purchased and planted now may not need pruning. But if there are any old canes that flowered and produced berries, they can be cut back to the ground.

After removing canes that have fruited, the new canes should be topped in summer when they reach a height of approximately 3 feet. This will encourage lateral branch development on which fruit will be produced the following year. Before growth starts in the spring, cut the lateral branches back to about 12 inches.

In late winter, dead and weak shoots should be removed, leaving about four strong canes of the erect varieties and four to eight canes of the trailing varieties for fruiting.

Blackberries are among the easiest, most reliable and most productive of the fruiting plants we grow in our home gardens and landscapes. Planted now, they can begin producing next year. If you don’t see a good selection of plants at your local nursery now, ask when they will be getting some in.