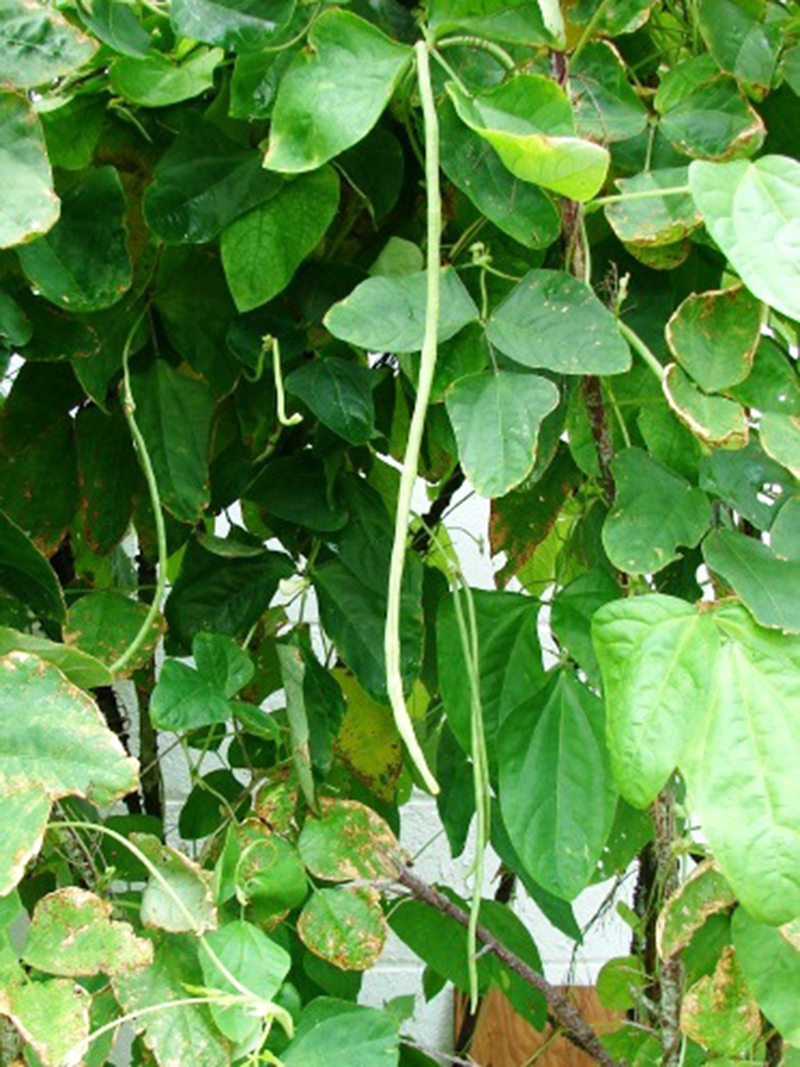 You’ve got to think that a vegetable with a name like yardlong bean would be incredibly productive – and you would be right. This vegetable originated in southern Asia and is now grown extensively in Asia and Europe. It is slowly gaining popularity here in the United States, but it is not as commonly grown in Louisiana as it deserves to be.

These unique beans, harvested in the immature pod stage and snapped like green beans, grow on a vine with twining stems and a tenacious root system. The plants bloom in midsummer with pairs of large white or purple flowers. Once pollinated, the flowers are followed by tiny dark green bean pods that reach a foot long in only a matter of days. The beans can grow up to 3 feet long, ripening to pale green and inflating as the red or black seeds inside mature.

Yardlong beans are easy to grow and undemanding. If beds are fertile, little or no additional fertilizer is needed during bed preparation; too much nitrogen causes rampant vine growth and fewer beans. Like other legumes, they can obtain nitrogen from the air with the help of nitrogen-fixing bacteria that live in nodules on their roots.

To plant them, choose a site in full sun. Loosen the soil to a depth of 8-10 inches, and then mix in a 2- to 4-inch layer of compost or composted manure.

Yardlong bean vines must be provided something to climb on. Tripods or row trellising with poles and string or netting is effective. Whatever method you choose, make the support about 7 feet high to accommodate the vines.

If you use a tripod system, plant three seeds to each pole. If you choose a row trellis, plant the seeds 6-12 inches apart. The seeds are planted about 1 inch deep and should be up in a week or so.

Be sure to water at least every other day until the seeds germinate. Mulch as soon as the seedlings are large enough, and water the bed thoroughly two to three times a week, as needed, until the plants are well established.

You will generally begin harvesting beans about two months after sowing and continue picking over a long period. Harvest when the beans are smaller than the diameter of a pencil, before the seeds have filled out inside and when the pods still snap when bent – generally when about 12 to 18 inches long. You may need to harvest daily because continuous picking keeps the plants producing. The plants will stop producing if beans are left to mature.

Like snap beans, yardlong beans are snapped into 1- to 2-inch pieces just before cooking. They can also be snapped, blanched and frozen for longer storage.

Some people think the flavor of cooked yardlong beans is similar to asparagus. They do have a denser texture than snap beans and a more intense “bean” flavor. They are a delicious substitute for snap beans when temperatures are too high for snap bean plants to thrive. Their texture and flavor hold up well when stir-fried or steamed.

If the beans are left to mature on the vine, the pods will reach lengths up to 3 feet, and the seeds can be shelled out and cooked as other southern peas.

Yardlong beans make a great addition to a kid’s garden during the summer. Children love the beans that may grow to be almost as long as the child is tall. Grow yardlong beans on a tripod of poles, and the young gardener can crawl inside the “teepee,” using it as a shady retreat from the heat.

A variety of other vegetables thrive in the hot summer garden. You could hardly have a Southern garden without okra. Plant seeds now into well-prepared beds, spacing the seeds 4-6 inches apart and thinning to a 12-inch spacing when they come up. Harvest the pods frequently while they are small and tender.

Southern peas are easy, productive and delicious. Excellent varieties include Mississippi Silver, Purple Hull, Whippoorwill, Black-eyed and Elite. They grow on short vines and do not require trellises.

Members of the cucumber family that can be planted now include cantaloupe, cassabanana, cucuzza, luffa, mirliton (plant sprouted fruit), pumpkin and watermelon. Although squash and cucumbers can be planted now, production is difficult during midsummer because of pest problems.

Dan Gill is a horticulturist with the LSU AgCenter and is known as a reliable source of helpful, useful advice on lawn and garden topics. He can be reached at DGill@agcenter.lsu.edu