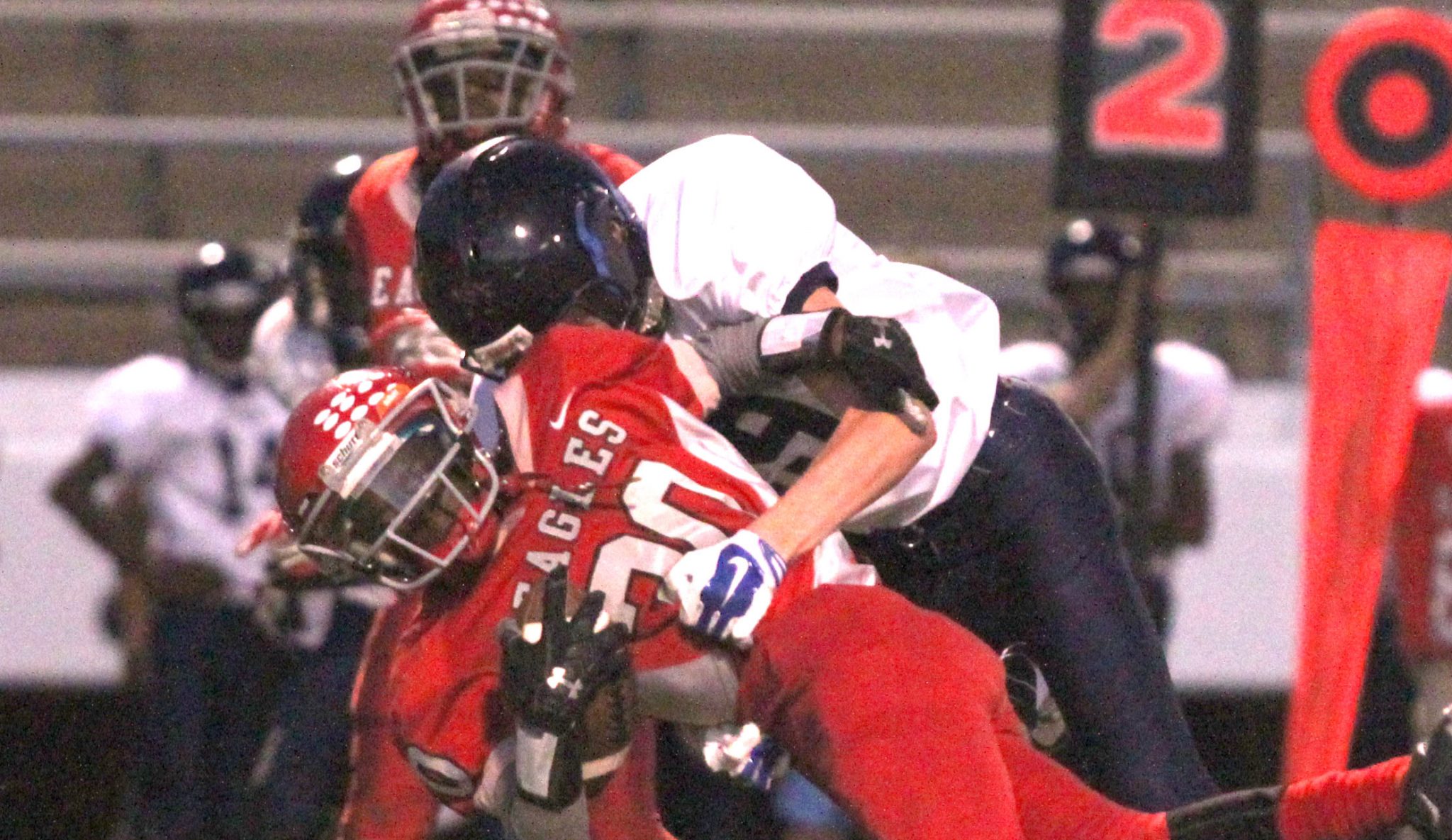 Elsewhere, the Elm Grove Eagles and Cope Cougars split games at Preston Crownover Stadium. The Eagles took a dramatic 22-20 win in the eighth-grade game and the Cougars won the seventh-grade game 28-16.

The Rusheon Rams and Haughton Bucs also split games at Haughton. The Rams took the eighth-grade game 16-8 and the Bucs won the seventh-grade game 36-28.

Elm Grove and Greenacres are tied for the eighth-grade lead at 2-0. Benton and Rusheon are 1-1. Cope and Haughton are 0-2.

Haughton, Greenacres and Cope are tied for the seventh-grade lead at 2-0. Elm Grove, Rusheon and Benton are 0-2.

At Preston Crownover, the eighth-grade game came down to the wire.

Cope took almost the entire fourth quarter driving down the field. The Cougars converted a fourth-and-2 at the Elm Grove 28 by the nose of the football. But three plays later, the Eagles stopped them on fourth-and-1 from the 19 and were able to run out the clock.

Elm Grove quarterback Amani Larry threw 60-yard touchdown passes to Anthony Papason and Chase Turner. He also scored on a 20-yard run and ran in two conversions, which were the difference in the game.

The game was delayed about 25 minutes in the second quarter when Elm Grove defensive standout Noah Bamburg suffered an injury assisting on a tackle. Bamburg broke the femur in his right leg and was transported by ambulance to a local hospital. Tabor said Bamburg had surgery Wednesday morning to put pins in his leg to straighten it.

Adrian Brooks had a big game for Cope. He rushed for 144 yards and scored on runs of 50 and 36 yards thanks in part to some great blocking. He also scored a conversion.

Jamal Johnson rushed for 140 yards and scored on runs of 40 and 60 yards to lead the Cope seventh-graders.

Thomas Williams also had a huge game. He rushed for 104 yards, including a 15-yard TD run, and ran in two conversions. Williams also returned an interception 103 yards for a touchdown on the game’s final play when Elm Grove was threatening.

At Haughton, Jacoby Decker scored on runs of 40 and 90 yards to lead the Rusheon eighth-grade team. He also scored a conversion.

CJ McWilliams ran for two touchdowns and passed to Keyshawn Davis for another to lead the Haughton seventh-graders to the win.

Davis and Tristan Sweeney had rushing touchdowns. Dylan Frazier ran for a conversion and Trenton Contario caught a pass for one. Kilian Malena was the leading tackler.

Jerry Anderson caught a pass for a conversion. Alejandro Barrera led the defense with five tackles.

Note: The above report was compiled from information reported by coaches. It includes all reports as of 9 p.m. Wednesday.