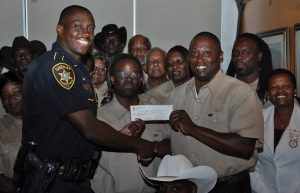 Star Hargrove (right), vice-president of No-Limit Riding Club in Haughton, and Cedric Davis (center), club president, present a $500 check to Deputy Cedric Payne of the Bossier Sheriff’s Office at Ralph & Kacoo’s in Bossier City.  The 38-member horse riding club recently completed a successful trail ride and wanted to give back to the community by donating funds to Bossier Sheriff Julian Whittington and the Sheriff’s Office, as well as seven area churches. 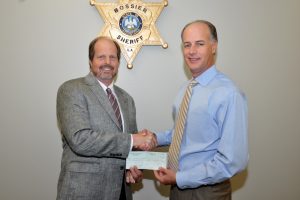 Joe Pulliam, local Arby’s president (left), presents a $2,500 check to Bossier Sheriff Julian Whittington to support the Sheriff’s Office Corrections Emergency Response Team (CERT).  Pulliam’s son, Chris, is a member of BSO CERT.  He and six others on the team recently competed in their first Mock Prison Riot training and competition in West Virginia, where they placed 10th overall in a competition that had 1,100 participants with teams from 32 states and 13 countries.  The CERT Team at the Bossier Sheriff’s Office comprises 16 operators who volunteer to train at least once a week.  They serve full-time positions on the shifts at the Bossier Correctional Facilities as the resident-expert special operations team that responds if an emergency or crisis situation happens in the jail.  The donation will help provide additional uniforms, supplies and equipment for the emergency response team.