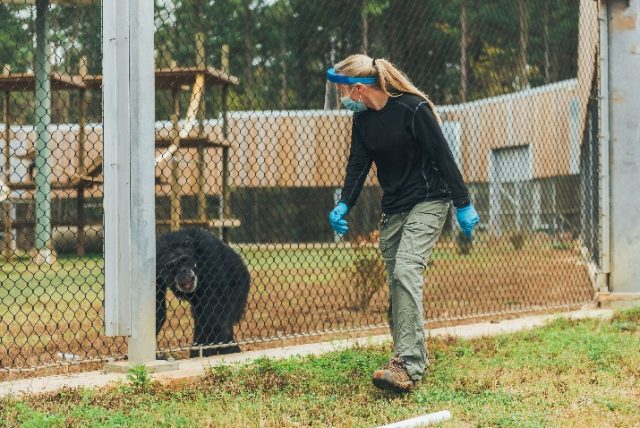 Feeling a little weighed down after feasting on a few too many holiday nibbles? Still hanging on to that extra 15 lockdown pounds? Well, then you’re obviously not a chimpanzee – or at least not a chimpanzee living at Chimp Haven.

That’s because the world’s largest chimpanzee sanctuary has the secret to fitness bundled into one amazing, yet chuckle-inducing, word: Gympanzee. In fact, Chimp Haven’s Gympanzee wellness program and the dedication of some motivated caregivers – got chimpanzee Crystal on the move, resulting in weight loss of more than 60 pounds!

The Gympanzee program encompasses overall health and fitness by pairing individual chimpanzees with a trainer to engage in one-on-one personalized care ranging from mobility and physical therapy to, in Crystal’s case, walking for weight loss. In fact, Crystal has logged more than 60 miles – most of which were with her favorite trainer, behavior technician Robyn Gillies. And what started as a walking routine now includes bursts of jogging, something that would have seemed impossible for this 35-year-old just a few years back when she was overweight and didn’t have the stamina to keep up.

“It’s an amazing feeling to see the payoff: the chimps feeling better, with more energy, and a better quality of life,” says Gillies. “I’m so proud of Crystal – she’s crushing it!”

And with 15,000 square feet to work with in Crystal’s corral, which was built as part of the sanctuary’s two-year Welcome Them Home expansion project, finding the space has been easy. The more challenging part is finding ways to motivate some seemingly low-energy chimps to move when the trainer and chimpanzee are separated by safety mesh. But that separation doesn’t seem to bother Crystal, who no matter the weather, meets Robyn by the outskirts of her corral, knowing that once their walk/jog is done, she’ll be rewarded with praise and likely some time to play with Gillies’ boots – Crystal is nothing if not a shoe girl!

“Since Crystal officially joined the Gympanzee Scale Club in 2017, she has more than 60 miles with staff,” Gillies said. The longest Gillies walks with Crystal in one setting is 30 minutes, “but even then she wants to keep going.” Gillies said she often now sees the chimp, who rarely got exercise on her own before the program, doing solo rounds in her corral without a trainer at her side.

“I have been able to build this amazing relationship with Crystal, and we are going on six years,” said Gillies, thinking back to when she first began helping Crystal exercise in 2016. “As someone who is always on the go, I wanted to walk in general and knew Crystal was a candidate that needed to lose weight. She is very people oriented and she took on the challenge,” she said.

In fact, Gillies said, there were times that Crystal served as the motivator.

“There were some days that I didn’t want to walk but I know we had a routine together, and I would miss Crystal’s smiling face,” Gillies said. And Crystal’s motivation has made lasting changes in the chimp’s health and well-being. “At the beginning I slowed my pace to be with her, but since she has lost the weight her stamina has increased and we stick pretty close,” Gillies said, “and when she gets to a jog I have to keep up with her!”

In addition, Gillies emphasized, the program is holistic in that the staff from all areas take part by evaluating the chimps’ diets, monitoring for illness and injury, and, yes, exercising. In fact, inspired by Crystal’s weight loss story – and those of some other impressive chimpanzees – the care staff at Chimp Haven is launching a steppers program in January to count all the steps each staffer, and maybe even some chimps.

Rebekah Lewis, Chimpanzee Training Program supervisor, said they monitor the weight of members of the Gympanzee Scale Club, of which Giles, Crystal, and nearly 60 other chimpanzees are members. Using in-floor scales, cooperative chimps are trained on how to step onto the scale so their weight can be easily determined.

“We have new in-floor scales in several of our areas, and are always looking for funds to add more in-floor scales to other areas,” Lewis said. “Since 2019, we have obtained 152 weights on 58 chimpanzees who have chosen to participate in weigh-ins through positive reinforcement training. We are very excited and proud of those numbers as weight monitoring for our chimps can be a very helpful and objective indicator of health,” she said.

Chimp Haven is a private, nonprofit refuge on 200 acres of forested land in Northwest Louisiana, and home to more than 300 chimps retired from biomedical research. The organization is currently working to complete a crucial sanctuary expansion campaign, which will allow it to welcome more chimpanzees to retirement at Chimp Haven. For information, visit chimphaven.org/expansion/ . To take a virtual tour, visit chimphaven.org/visit/digital-tour/