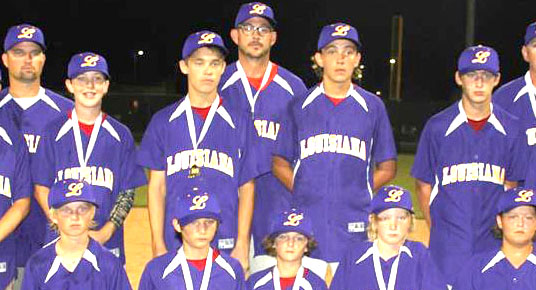 The Haughton All-Stars were eliminated from the Dixie O-Zone (12s) World Series on Tuesday night with a 3-1 loss to Georgia.

Haughton, which represented Louisiana as the state champion, finished 2-2 in the tournament and in the top six in the 12-team double-elimination tournament. According to its GameChanger page, Haughton finished a strong summer with 17 wins and just five losses.

Stovall went 2-for-3 against Georgia. Harlan hit his second home run of the tournament. Golden also had a hit.

In its other tournament games, Haughton defeated Arkansas 10-0 and North Carolina 6-2 before falling to Florida 15-7.

Stovall and Golden had two hits each against Florida. Turner and Phillips had one each. Shankle had two RBI.

Shankle and Reese Seals combined on a 1-hitter in the win over Arkansas. Shankle didn’t allow a hit and struck out six in three innings. Seals struck out two in one inning of work.

Whitten went 2-for-2 with a home run and two RBI. Phillips had two hits and an RBI. Stovall, Golden, Shankle, Harlan, Ebarb, Wallace and Keith all had one hit.

Harlan went 2-for-3 with a solo home run against North Crolina. Turner and Tolbert had two hits and two RBI each. Phillips had two hits, including a double. Stovall also had a double. Shankle and Ebarb had one hit each.