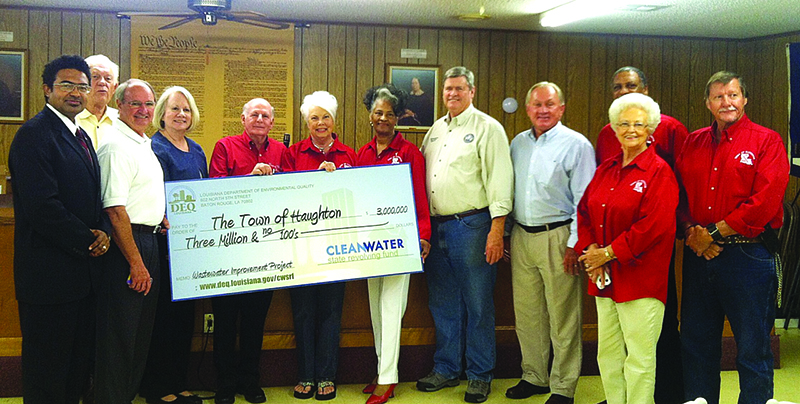 The Town of Haughton and other state and local officials celebrated the closing on a loan Wednesday to fund upgrades to the town’s sewer system.

“We’ve got this new loan, and we got it at a good interest rate. It’s certainly going to be beneficial to the growing community,” said Martha McGee, mayor protem.

Residents approved the town’s application for the $3.3 million Department of Environmental Quality loan to fund a sewer system upgrade in a Nov. 6, 2012 election.

The rapid growth and development of Haughton has put a strain on its sewage intake and disposal. This has led to problems with meeting DEQ standards, bordering on the city being fined for non-compliance with regulations.

“We’ve been behind for several years in our sewer plants concordance, so we needed (the loan) badly,” said Mayor Carlton Anderson.

“With the town’s continued growth, waste is a natural occurring thing that you have to deal with. Haughton is a progressive town, growing by leaps and bounds. It’s critical — without this, they can’t continue to grow,” said State Senator Robert Adley, R-Benton.

“It was very important to secure the loan because we had to. Over the years we were threatened to be fined, so it was mandatory that we do something with our system,” added McGee. “It’s been a long process, but it’s going to be worth it to benefit the community area and help with the growth of new schools.”

“It’s going to be a tremendous upgrade, and a tremendous asset to the parish and the town of Haughton because the parish is growing so fast. Last I heard, Bossier Parish is the 99th fastest growing parish/county in the whole United States of America, so that tells you something right there,” said Bossier Parish Police Juror “Coach” Bob Brotherton.

Officials said the loan process has been in the works for five years.

“It’s a lengthy process we have to go through. In the town’s case, environmental reviews and other factors had to be collected to review. It’s not a short application process,” said Dr. Bijan Sharafkhani, DEQ administrator.

“The Mayor before me requested the loan initially but they were denied. So I reapplied, after becoming Mayor and after a period of time we were granted the loan,” said Anderson.

State Rep. Henry Burns, R-Haughton, said the town had to work hard for the loan, but the state saw the value in awarding it to Haughton due to the overwhelming need.

“The petition to DEQ was down to influence, because we don’t have the legislative numbers, but bossier parish is one of the fastest growing parishes in the state,” he said. “(The state) looks at the most need and who will be the best stewards of that money They know Haughton is going to spend it right. So it’s a compliment to them because not only are they good stewards, they respond to the demanding detail of need and request.

And now that the town can begin on the much needed upgrade of its sewer system, locals predict even more growth and development within its borders.

“Once people find out that we have a newer sewer system, they’ll be looking to come here. I just perceive that the community is going to grow, there’s going to be building all over,” said Brotherton.

Under the loan, the city would obtain the money at .95 percent interest for 20 years. Anderson said in the letter that he is optimistic that it can be paid off in 10 years’ time.

The project is expected to be completed in one to two years.