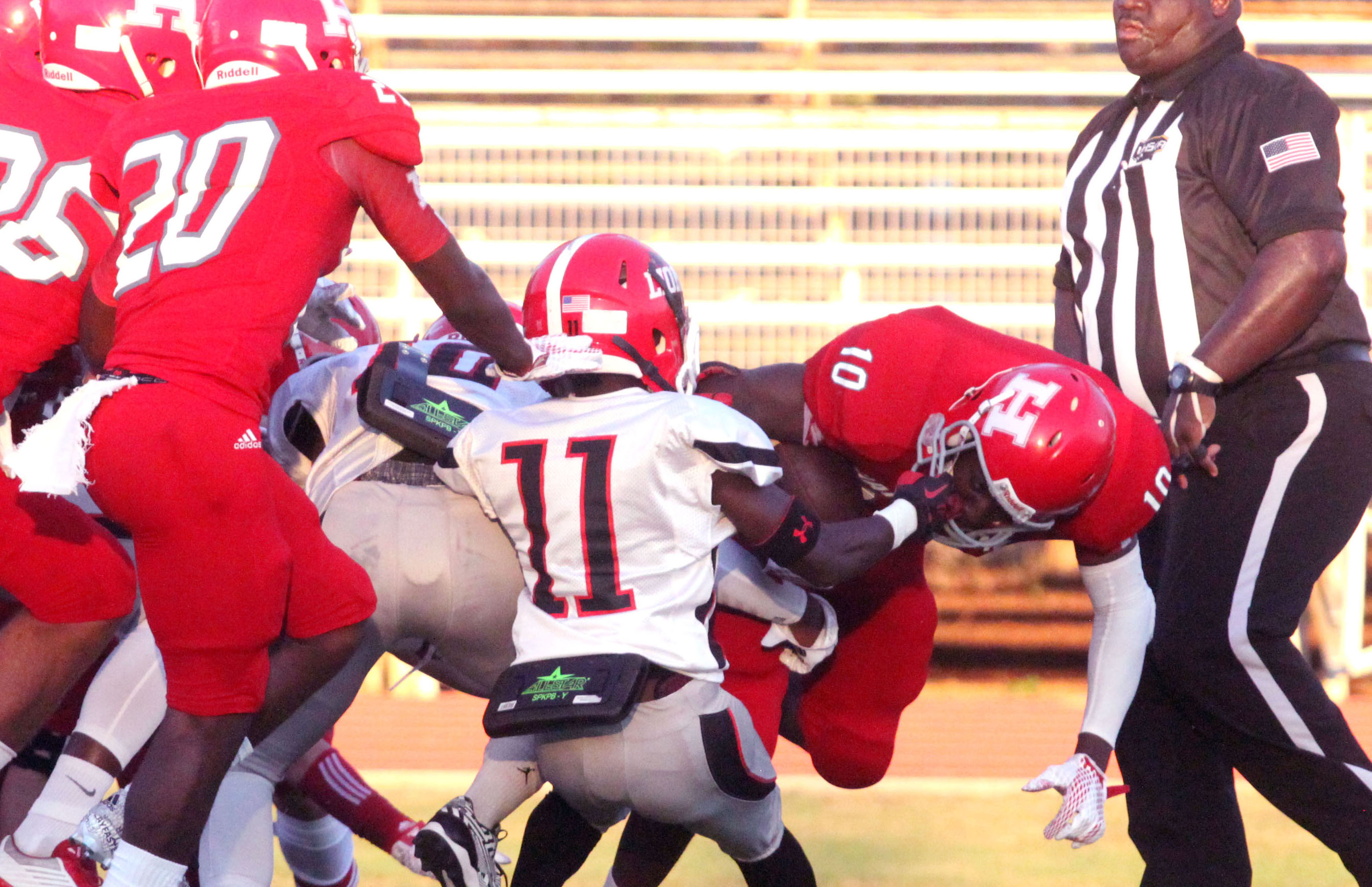 “We have played bigger schools with more people that didn’t play as hard as they played,” Guin said. “They never quit.”

Plain Dealing stunned the Bucs with an 80-yard drive for a touchdown early in the first quarter. Matt Sullivan completed three passes on the drive, the final one a 3-yarder to Keldrick Carper. Derreon Washington also had a nice run to set up the score.

A two-point conversion pass from Sullivan to Carper gave the Lions a brief 8-7 lead.

“I think it went about as well as it possibly could have for us tonight,” said James Thurman, who made his debut as Plain Dealing’s head coach. “I was very, very pleased with the kids.”

After Plain Dealing’s TD drive, the game turned into one that you would expect between Class 5A and Class 1A schools. The Bucs scored four quick touchdowns to take a 35-8 lead at the end of the first quarter.

The Lions were outnumbered by about four to one. A running clock was used for much of the rest of the game. Guin said he played every player that dressed out.

Kei’Untre Normandin scored on a 42-yard run and finished a short night with 74 yards on six carries. Backup Durwin Adams scored on a 5-yard run.

Antonio Woodfork set up a Haughton TD with a 34-yard punt return.

Plain Dealing closed the scoring on a pass from Sullivan to Carper.

“That No. 2 (Carper) can play,” Guin said. “The little quarterback took some shots and kept playing.”

Sullivan, a sophomore, was making his first start.

“Starting at Haughton, 80 players dressed out on the other side, all those people in the stands — he could’ve folded shop at any point,” Thurman said. “But he battled, battled and battled.”

The 6-foot-4 Carper showed why he’s one of the state’s top prospects in the Class of 2017.

“He was the guy that stood out on our team, catching some fantastic balls and going up and making some plays,” Thurman said. “I’m very, very proud of him as well.”

Guin said his team got some positives from the game other than the 1-0 start.

“We did some good things on offense,” he said. “We cut down on penalties and mental mistakes. We looked good playing early in the game. That’s what we wanted to do, get out early and score and that’s what we did.”

Nico Broadway was 5-for-5 on extra points and kicked every kickoff into the end zone for a touchback.