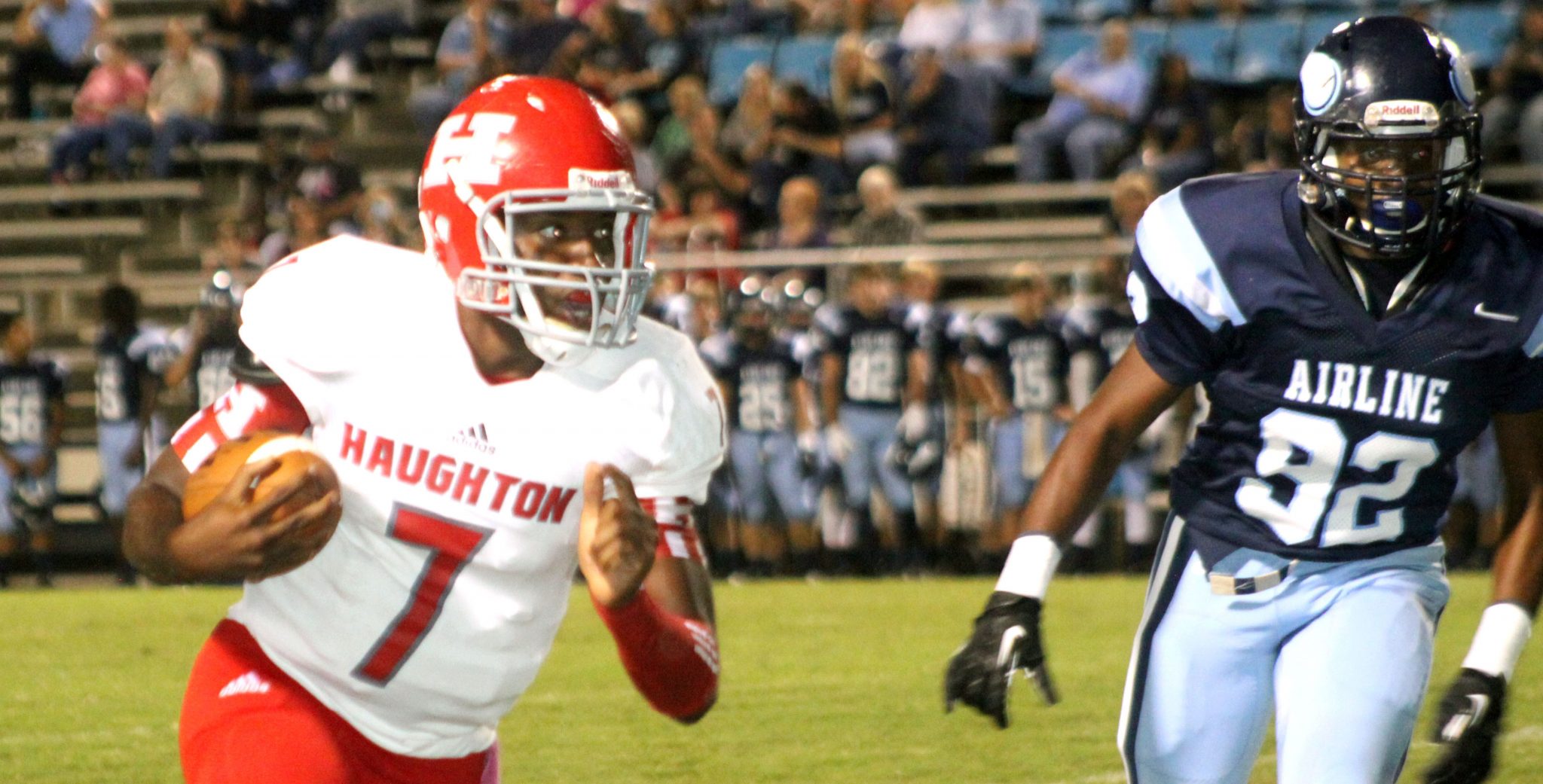 As the final seconds ticked off the clock at Airline Stadium, Haughton head coach Rodney Guin turned toward principal Gene Couvillion. With a big smile on his face, he raised his right hand to give Couvillion a high five. That quickly turned into a hug.

Haughton had just done something rare in Guin’s 15-year tenure as head coach — beaten Airline. With the thrilling 28-26 victory, the Bucs improved to 7-0 overall and 2-0 in District 1-5A.

“This is a big game for us,” Guin said. “I’ve been here 15 years and we had won this game twice. This is a game we’ve had a hard time winning. So it’s big for us to win.”

Like last season’s 28-21 Airline victory, Friday’s game went down to the wire. Airline’s Darian Germany scored easily on a 3-yard run up the middle on fourth down with 1:17 left in the game to get the Vikings within two.

But the Bucs forced Germany outside on the two-point conversion try and gang-tackled him well short of the goalline. When Haughton’s O’Shun Smith recovered the onsides kick, the celebration started on the Bucs side of the field.

Airline (2-5, 0-2) avoided the kicking game mistakes that have plagued it in past games. But the Vikings turned the ball over twice inside Haughton’s 10 in the second half. The first was a fumble into the end zone.

On the second, Haughton’s Jesus Santos knocked the ball loose after a pass completion. It sailed into the end zone right into the hands of the Bucs’ JT Bledsoe, who dropped down for a touchback.

Airline forced a punt, though, and drove for the touchdown to get within two.

While it seems the Vikings have been snakebit this season, Coach Bo Meeks isn’t ready to go that far.

“We made the mistakes, and Haughton forced them too,” he said. “They’re a great football team. You can’t make that many mistakes against a good football team. But I’m proud of our guys. We’ve fought for 48 minutes every game we’ve played this year. I’m extremely proud of the effort. We’ve just got to correct mistakes.”

The game featured outstanding performances by both team’s quarterbacks.

All three of Hildebrand’s touchdown passes came in the first half as the Vikings built a 20-7 lead. They went to Harvey Calhoun (69 yards), Anthony Mulrenin (69 yards) and Micah Dunn (15 yards).

Both of Haines’ first-half TDs were 3-yard runs. The second came with 9 seconds left in the second quarter. Haines did most of the work himself on the 60-yard drive. Nico Broadway’s second of four PAT kicks made it 20-14.

“We didn’t play well in the first half, bunch of mistakes,” Guin said. “We played good football in the second half. And good defense. We were kind of like we have been. We didn’t give up many points. The offense, I never thought we could run the football like that. We ran the football well.”

Airline is by no means out of the playoff picture. Last year, the Vikings made it with a 5-5 record. They’ll have to win their final three games to equal that mark.

“That’s what we’re going to plan to do,” Meeks said. “We plan to win every week. We’re going to work to correct those mistakes and these guys are going to take pride in their job and get ready to play next week.”