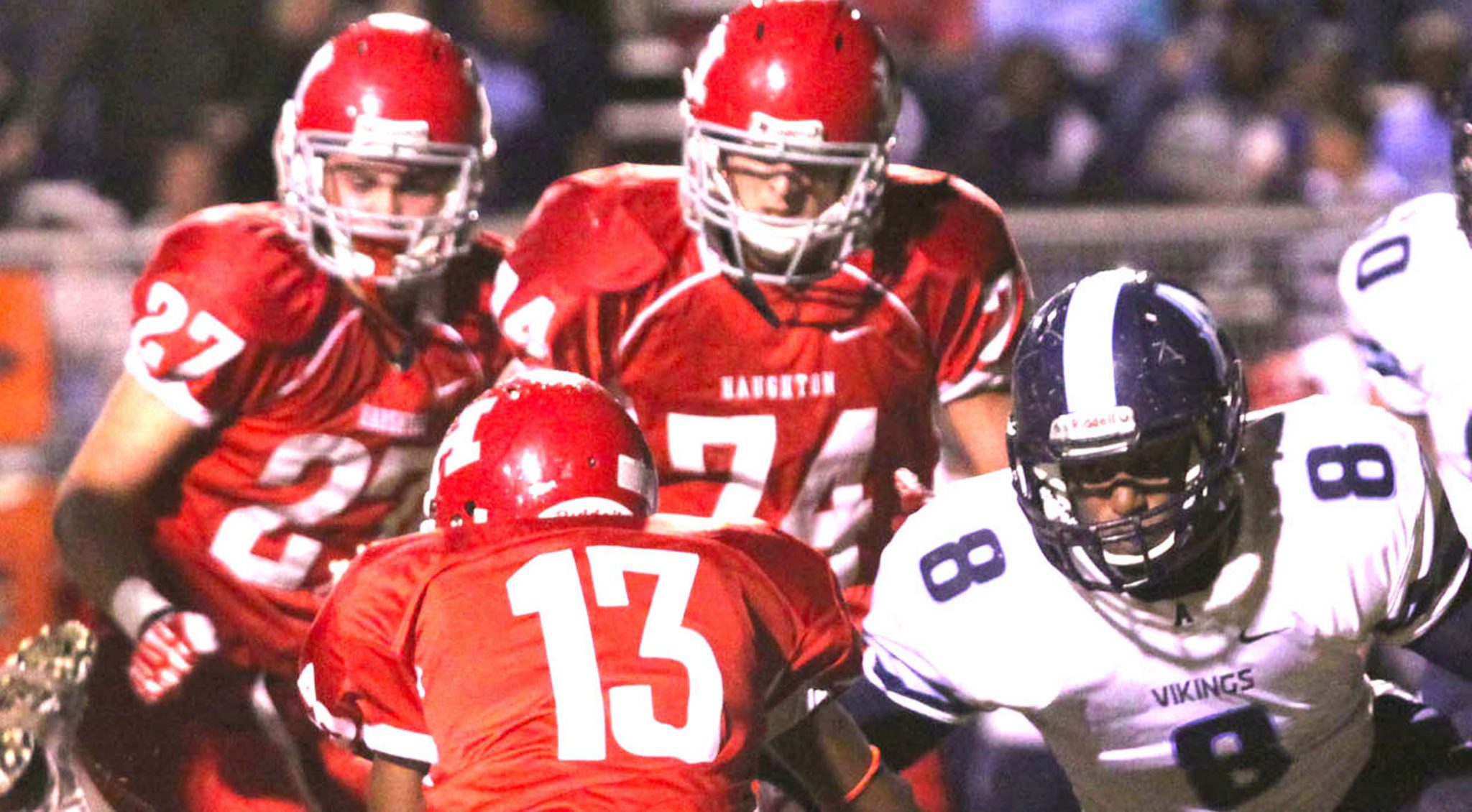 The Haughton Buccaneers lost a wild 56-55 overtime game to the Ponchatoula Green Wave Friday night in the first round of the Class 5A state playoffs in Ponchatoula.

The Bucs (6-5) twice rallied from 14-point deficits to take the lead.

O’Shun Smith’s interception return for a touchdown late in the fourth quarter gave the Bucs a 49-42 lead.

But the Green Wave was able to tie it with 55 seconds left and the game went into overtime.

Ponchatoula went on offense first and took a 56-49 lead. Haughton reached the end zone on its possession to cut it to one.

After Haughton tied the game at 28 in the third quarter, Bucs coach Rodney Guin made the decision that if the game went into overtime and Haughton had a chance to win it, the Bucs would go for two.

“We couldn’t stop them,” he said. “We had lost a couple of more kids on defense (to injuries).”

On the two-point conversion, the Bucs planned to attempt a halfback pass.

“We had a great play called,” Gains aid. “Actually, the kid was open.”

But Darious Brooks, a backup quarterback, was tackled around the 12-yard line before he could throw.

Facemask is a spot foul, so the ball was placed at the 6-yard line. Guin then decided to go for the tie and send it into a second overtime, but the kick was no good.

“For the first time really since Week 1, we had every offensive starter playing,” Guin said. “We played like we knew could’ve played all year if we would’ve had those kids in there.”

Jarred Craft caught a 50-yard Hail Mary pass from Will Haines on the final play of the half to cut the Green Wave’s lead to 21-14.

With the help of onsides kicks, Haughton scored three straight touchdowns to take a 35-28 lead.

“They were so much bigger than us,” Guin said. “Eventually, it was just hard for us to stop them.”

The game was the final one for three-year starters PJ Douglas (receiver), Travis White (offensive lineman) and the Craft twins, Jarred (running back) and Jerrod (defensive back).

“We’re going to definitely miss them,” Guin said. “Not a real deep senior class but some quality players.”

The Bucs will have some outstanding players returning next year, including Haines and wide receive Javonte Woodard.

Backup running back D’Kovin Ware showed potential subbing for the injured Craft during the early part of the district season.

“We feel good about the kids have coming back,” Guin said. “We started two freshmen on defense late in the year. A lot of young kids played a bunch.

“We’ve got to find some size, though. We don’t have it right now and it’s hard to compete at the 5A level without it.”