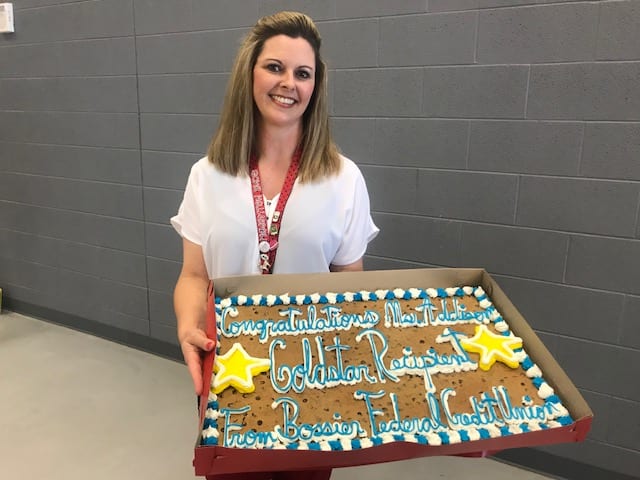 As a military spouse, Nicole Addison has lived in a lot of places and worked in a number of capacities. None, she said, compare to being the sixth grade counselor at Haughton Middle School.

“It’s not work when you love it and I love it here!” Addison exclaimed.

Always armed with a kind word and smile, Addison arrived on the scene at Bossier Schools three years ago and at Haughton Middle in 2017. It could not have been a better fit. What she found was an extended family.

“To be a part of a family is great when you’re so far away from your own,” Addison explained.

Her colleagues are quick to sing her praises and more than a dozen of them nominated her for Bossier Schools’ Gold Star award, a surprise that left Addison stunned during an impromptu presentation during sixth grade lunch shift.

“She is a bright shining example of how a caring adult can change the lives of the children she influences,” wrote Jessica Daigle.

Carly Moore shared how Addison hit the ground running from day one, making sure every student’s needs were met, whether lending a listening ear or offering words of encouragement.

“A few of Nichole’s random acts of kindness can be seen through a 6 a.m. text, asking what your favorite SONIC drink is,” Moore added. “The heartfelt notes you may receive in your box, and the 343 Post-It notes addressed to every student by name left on each teacher’s classroom door the week of LEAP testing. In my five years of teaching, I have only met a handful of people that can make me smile as much as Mrs. Addison does.”

Others spoke of the fresh ideas Addison has brought to HMS and how she has boosted morale, calling her “the heartbeat of the sixth grade wing.”

“She encourages our teachers to work together by doing things like a scavenger hunt,” Megan Picou said. “We were all given a list of tasks to complete with our kids. Things like ‘take your kids outside’ or ‘dress like what you’re talking about in class.’ Not only did this have us working together, but the kids got involved, too!”

“Doing a good job is simply doing my job,” Addison said, who was deeply humbled by the words of affirmation and Gold Star award. “To know that I have positively impacted people to the point they speak out about it — that is true discipleship.”

After a long line of students came by to hug or congratulate Addison, she confessed “This is my first time working with middle schoolers and I swore I would never do it.” Soon afterward, the school counselor quickly changed her tune.

“I think they’re at a developmental stage where they’re figuring out who they are and it’s an honor to be a part of it. They still have kid in them, but they are also starting to spread their wings and bloom. They truly appreciate you at this age, because they’re starting to grasp true appreciation and it’s genuine.”

Addison also counts working with her colleagues an honor.

“Bossier Parish Schools provide an atmosphere like nothing I have ever seen. The support and love are genuine amongst its employees. I am a better person because of the people I work with.” She went on to say, “At a time where people are quick to speak negatively, this was a staunch reminder about my purpose. As long as people leave me better than when we met, my job is done.”

Do not mistake her statement as if she is leaving, though. Addison and her family have finally found a place they can put down roots permanently.

“We love Louisiana so much we’ve decided to retire here. We have bought a house. I am here!”