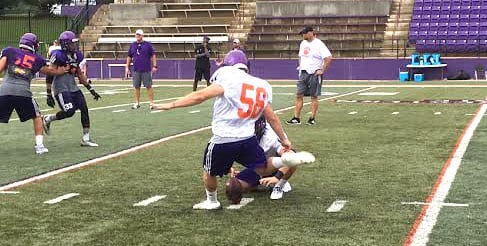 With the All-American gone, special teams coordinator August Mangin has spent most of the early portion of camp overseeing an open competition.

Junior college transfer Eric Piccione and Haughton High product Benny Broadway have been working with the top two kicking units as they attempt to step in for Moore, who set the school records for most career field goals (45) and for career scoring (248).

“They’ve been battling,” Mangin said. “They’ve both been doing great — Austyn Fendrick, the freshman as well. He’s stepped up and given us that other dimension. They keep coming. They keep progression. By the time the season gets here, we’ll be in good shape.”

While Piccione arrived in spring from Blinn (Texas) College, Broadway began his college career at Northwestern State before spending time at Bossier Parish Community College and at Louisiana Tech.

BPCC does not have a football team, and Broadway, a sophomore, did not participate in football at Louisiana Tech before returning to NSU.

“I love it here,” Broadway said. “It’s really family oriented. Once you leave home, you always find your way back. I know it’s the right place for me. It’s where I had to be.”

For Piccione, being able to spend spring practice in Natchitoches helped him acclimate quicker to the rigors of Division I football.

“It’s a lot more football-oriented (than junior college),” he said. “(At Blinn) you have meetings once a day and you’re done. Here, football is your life for the most part. It’s huge having a good group of guys like these. You’re surrounded by them always. Being around a good group makes time fly.”

Because of his accomplishments, Moore’s shadow likely will extend over the NSU program for a long period of time.

It may hang tight over Piccione, who is wearing Moore’s former No. 37.

“I really don’t look at it that way,” Piccione said. “I just do my job the best I can. I just leave it up to God. I just do my thing. I can’t really ask for much more than that.”

Mangin said his message to Piccione, Broadway and Fendrick is simple, telling them, “just worry about yourself and you’ll be fine.”

Between Mangin’s positive message and the inherent bond shared by seemingly all specialist groups, the NSU kickers have formed a tight-knit group as they move closer to the Sept. 2 season opener at Baylor.

“It’s been a great competition,” said Broadway, whom Mangin termed “reliable” and a hard worker. “I love kicking with Eric. We make each other better. We’re in it for the team. Whatever happens happens. We’ll help each other out.”

Piccione, who also is in the mix to replace three-year punter Andy Wickman. echoed Broadway’s sentiments toward whomever steps into the kicking void.

Said Piccione: “Iron sharpens iron. That’s what coach preaches every single day. I’m a huge believer in that. You have to have competition to get better. You get better by one percent every day. That’s the biggest thing.”