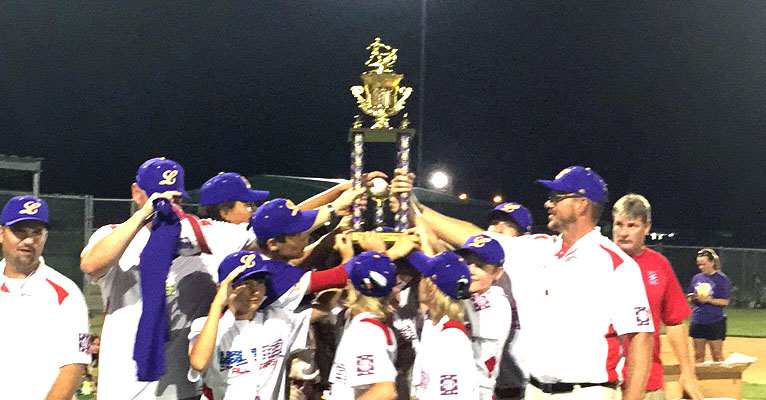 Haughton scored a run in bottom of the ninth — the third extra inning — to win the first game 1-0 and force a winner-take-all game for the title.

Haughton then scored five runs with two outs in the top of sixth inning to win the second game and the championship 5-3.

Both teams had outstanding tournaments.

Benton entered the day 4-0, having defeated Haughton 7-5 in the winners’ bracket final of the double-elimination event Sunday night. Haughton had to win twice Tuesday to take the title.

Haughton advances to the Dixie Youth O-Zone World Series Aug. 8-13 in Lexington, S.C. Benton, which won the District 4 title over runner-up Haughton, closed an outstanding summer 13-2, according to the team’s GameChanger account.

Both games featured outstanding pitching performances by both teams.

In the first game, Stovall led off the bottom of the ninth with a double, advanced to third on a Golden sacrifice and eventually scored the winning run.

Benton had the bases loaded in the top of the seventh with one out, but Shankle struck out two straight batters to end the threat.

According to statistics on Haughton’s GameChanger account, Seals started the game on the mound and allowed two hits in four innings. Shankle pitched the next three, allowing one hit and striking out five. Wallace allowed one hit in the final two innings.

Stovall finished with two doubles. Shankle, Whitten and Wallace all had one hit.

Benton scored all three of its runs in the first inning and got a gem of a game on the mound from Jones. According to statistics on Benton’s GameChanger account, he allowed just three hits and struck out 12 in seven innings of work.

Stearns, Sharp, Rogers, Jones and Burrell all had one hit.

In the second game, Wallace had a two-out double to start Haughton’s sixth-inning rally. Shankle had a two-RBI double and scored the go-ahead run on a Turner single.

Stovall, Whitten and Wallace had one hit apiece. Wallace started the game and pitched four innings. Tolbert and Shankle pitched one inning each.

Jones went 2-for-3. Stearns and Dominick each had doubles. Rogers and Mims had one single and one RBI each. Burrell and Smith had singles.