A Haughton woman was arrested Wednesday morning after she turned herself in for trying to kill her husband.

Adrianne D. Warren, 27, of Burge Drive in Haughton, was charged with attempted 2nd degree murder for slashing her husband’s throat at their residence a week ago. 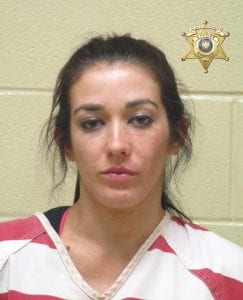 Bossier patrol deputies responded to 911 call around 10 p.m. on June 14 that came from a concerned neighbor after discovering the man’s neck had been slashed.  Deputies found Warren and her husband, whose throat had been cut, at the residence; their two minor children had left the residence with another family member just prior to the incident.

Warren’s husband was transported to University Health in Shreveport for treatment.

Bossier detectives arrived on scene and determined that Warren and her husband had been arguing at the residence.   Her husband had a deep cut in his neck and had gone in and out of consciousness due to a state of intense intoxication while under the influence of alcohol and drugs.  Detectives determined that someone cut his throat between 9:30 and 10 p.m. with some sort of sharp cutting instrument.

Warren and her husband both indicated there might have been a home invasion that evening on June 14.  Deputies discovered that blood at the crime scene had been cleanup up, and they found bloodied towels in a shed in the backyard.  Detectives obtained a search warrant for the residence and also found suspected marijuana and a smoking device inside the residence.  Warren was then charged with obstruction of justice, possession of marijuana (2nd offense) and possession of drug paraphernalia and booked in the Bossier Maximum Security Facility early June 15.

Bossier detectives were then able to fully interview her husband on June 19.  With a clear mind, he admitted that he was quite inebriated that night on June 14 and that he and his wife had been arguing.  He also said he realized his wife almost killed him.

Detectives believe Warren and her husband were the only ones in the residence during the scene of the crime and that she slashed her husband’s throat.  On Tuesday morning, they obtained an arrest warrant for attempted 2nd degree murder, and Wednesday morning, Warren turned herself in.  She faces a $160,000 bond on the charges.

Their children are with other family members, and her husband is out of the hospital recovering.