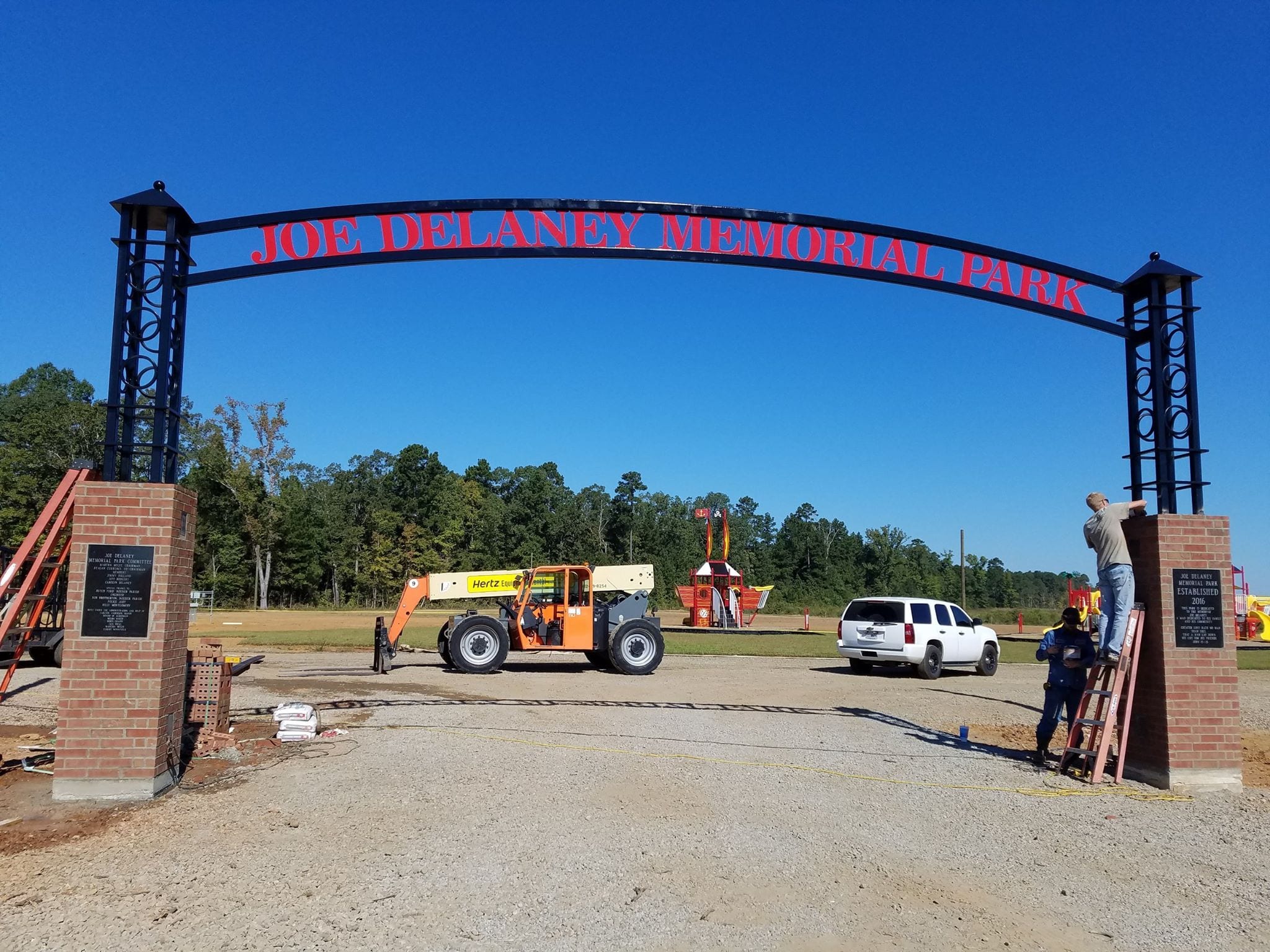 Reagan Currence, co-chairman of the park committee, said they have installed the playground equipment, started the underground electrical work, installed a custom gate and entryway, and planted grass at the six acre lot on North Hazel Street. A custom memorial will also be installed in the coming weeks, dedicated to the kind-hearted man who gave his life to save others.

Joe Delaney died June 29, 1983 while trying to save three children from drowning in a pond near Monroe. He couldn’t swim, but it didn’t stop him from trying. Only one person survived the water that day.

Before his death, his goal was to build a park for the children of his community. There’s plenty of work to be done, but the town is getting its park.

The community is invited to a grand opening celebration on Saturday, Oct. 29, at 2 p.m. Delaney, a Haughton native, was a two-sport All-American at Northwestern State University in Natchitoches and a Pro Bowl running back for the Kansas City Chiefs. Both teams have been invited to attend the opening.

The park still needs money to proceed with construction of some bigger items, including the spray park, pavilions, walking trail, sand volleyball courts and bathrooms. The park took a big hit when Governor John Bel Edwards line-item vetoed their $675,000 from the state budget during the second special session this year.

In all, Edwards cut 25 items from the budget. Bossier Parish lost $1,685,000 in construction project funding as a result.

Currence said the veto almost stopped the park from happening.

“The town doesn’t apply for a lot of [funding] like that,” she said. “We try to be very self sufficient as a town and we don’t normally seek funding elsewhere. When we do ask for something, it’s very disheartening when we don’t get it.”

But Haughton is resilient and found ways to fund the project on their own.  The town’s elementary schools have raised over $10,000 alone through various events and fundraisers. Senior Project fundraisers have also helped the park along the way.

“We aren’t giving up,” Currence said. “The community has been really good with helping out whenever they can and we’re very thankful for that.”

They are trying new ways to raise money. The committee is selling custom engraved bricks for $100. Purchased bricks will be placed around the memorial at the park.

Currence said anyone, anywhere can purchase a brick.

The Office of the Lieutenant Governor announced last week the communities of Walker, Patterson, Haughton and Houma will receive a total of $1 million in Federal funds for projects that will enhance the quality of life through new recreational facilities. This includes Joe Delaney Memorial Park.

“These are funds needed to make it a complete park, not just a playground,” Currence said. “We’ll keep applying for grants and finding ways to get this park done. We won’t stop until it’s finished.”