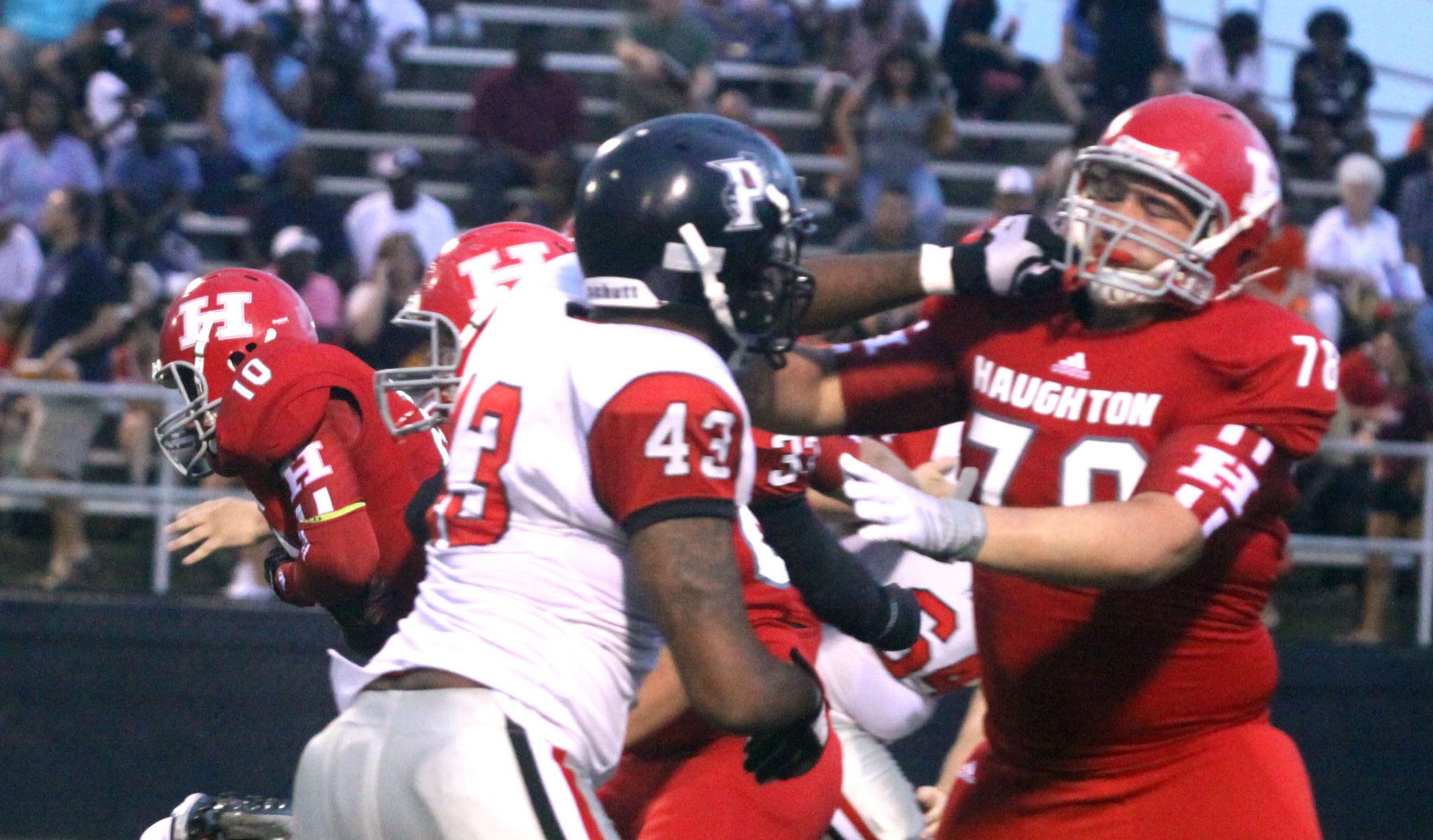 The jamboree was called off at halftime of the Parkway-Haughton “game” with Parkway leading 7-0. During the latter part of the 12-minute first period, lightning could be seen south of Airline Stadium. It became more frequent about halfway through the halftime.

Haughton players began to stream out of the locker room with about two minutes remaining in the half but were immediately ushered back inside. A few minutes later it started raining heavily.

The jamboree was officially in a lightning delay when Parkway coach David Feaster and Haughton coach Rodney Guin decided not to wait and hustled their players to the buses behind the field house, The Airline-Benton game was then cancelled.

The only “game” completed was the first one between the Plain Dealing Lions and the Bossier Bearkats. Quarterback Logan Allen led the Lions to a 28-14 victory.

The game didn’t start especially well for Allen or the Lions. On the first play, Allen threw a swing pass toward the Lions’ sideline that was ruled a lateral. Bossier recovered at the Plain Dealing 18, Three plays later, including two runs by Avery Jones, Brandon Harris scored from 2 yards out.

On Plain Dealing’s second offensive play, a bad snap resulted in a loss back to the Bossier 13. Allen then made his first big play. Isaac Jacobs raced past a Bossier defender down the left side of the field and Allen hit him in stride for an 87-yard touchdown. Allen’s two-point conversion run gave the Lions an 8-7 lead.

Bossier reached the Plain Dealing 27 on its next possession behind the running of fullback Isaiah McKinsey, But Jones was dropped for a 5-yard loss on fourth-and-7.

On the next play, Allen and Jacobs hooked up for a 68-yard touchdown that was virtually identical to the first one.

Allen then made his presence felt on defense, intercepting a Keimun Daniels pass over the middle and returning it 60 yards for a TD. He also had a fumble recovery in the second half.

Bossier drove 46 yards for its second TD, a 9-yard run by Jones. Daniels and McKinsey both had good runs on the drive.

Haughton’s Quentin Brown ended the threat with a leaping interception at the Bucs 13.

On the next play the Panthers returned the favor. Kaleb Monroe picked off a Will Haines’ pass and returned it 22 yards for a TD.

Haines then moved Haughton smartly down the field, completing two passes to Amtonio Woodfork. The second one was a short pass that Woodfork turned into a nice gain. On fourth-and-9 from the Parkway 33, Haines passed 14 yards to Josh Lister.

After Lister lost 7 yards, Haines found Javonte Woodard for an 18-yard gain to the 8. The Parkway defense held the Bucs to just five yards on the next three plays. On fourth-and-goal, Haines lobbed a pass into the back corner of the end zone intended for Woodard. Parkway’s CJ Morgan and Woodard went up for it and the ball was tipped away incomplete.

Parkway reached the Haughton 25 on its final possession. McKnight ran for a first down on fourth-and-11 and Stacy McCray had a good gain on a short pass from Wudtee. But the Bucs turned back the threat thanks to a strong pass rush and good coverage by the secondary.