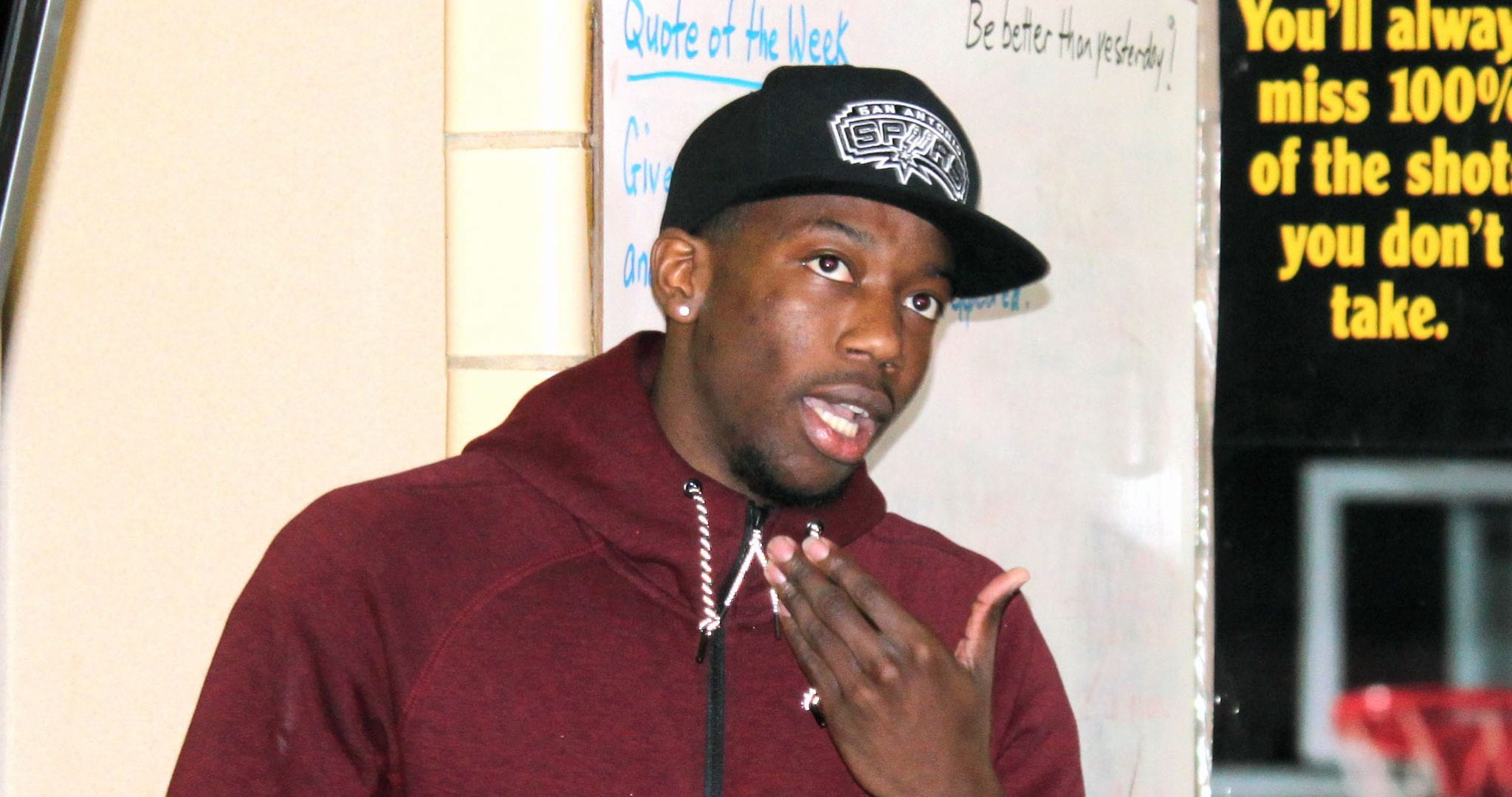 Just four days after making a huge splash in the NCAA Men’s Basketball Tournament, Josh Hagins was back at his alma mater, Airline High School.
Hagins spent time at the school Monday afternoon. First he helped run a practice session. Then he spent about 20 minutes in the locker room speaking to the players, imparting wisdom from the his days as a star at Airline from 2008-12 and at Arkansas-Little Rock the last four seasons.
Last Thursday, Hagins became a trending topic on Twitter and darling of March Madness after leading No. 12 UALR to an 85-83 double-overtime victory over No. 5 Purdue in a first-round game of the Midwest Regional in Denver.
Hagins, a 6-foot-1 senior guard, hit a 3-pointer from about 30 feet with seconds left on the clock to send the game into overtime tied at 70. He sank a short pullup jumper to send the game into the second OT tied at 75.
He then scored UALR’s first basket of the second OT.
All told, Hagins scored 29 of his game-high 31 points in the second half and overtimes. He also grabbed seven rebounds and had six assists and five steals.
In doing so, he became the first player in the NCAA Men’s Tournament to have at least five steals, rebounds and assists while scoring at least 30 points since steals became an official statistic in 1986.
The win was only the second for UALR in the NCAA Tournament in the program’s history. The first was 20 years ago.
Hagins and the Trojans came back down to earth Saturday, falling to No. 4 Iowa 78-61.
But that did little to diminish UALR’s season. The Trojans finished 30-5 after winning the Sun Belt Conference regular-season and tournament titles.
If you think Hagins, a first-team All-SBC selection, was at Airline to talk about his tournament exploits, guess again.
He never mentioned it in the 20 minutes.
What his speech boiled down to was something simple, something that coaches emphasize every day to their players but sometimes comes through clearer when a successful player closer to their own age preaches it.
Hard work is the key to success.
“It’s not the talent you have but what you do with it,” Hagins said near the end of his speech.
He told the players that games are won at this time of year, during offseason workouts. The work the players put in now will determine how they fare during the season.
Hagins used former Bossier star Jalan West as an example of someone who developed his talent with a strong work ethic. West led Bossier to the 2011 4A state championship, when Hagins was a junior at Airline. But Hagins remembers West as someone who wasn’t a superstar in middle school, as someone who spent hours and hours in the gym to become not only a great player but a great teammate.
Hagins also told the Vikings to be mindful of time and enjoy the moment.
“The most precious time you have is right now,” he said.
The players, he said, do have some time to get things done, but it slips away quickly.
“I can still remember my first practice at Airline when I was a freshman,” he said. “That was eight years ago. That’s a long time ago.”
He said his years at Airline under coach Chris White taught him how to be a winner.
“Basketball is not just about the physical tools,” he told them. “It’s all about your approach to the game. These four years at Airline were crucial to me.”
It’s four years he’ll always savor.
“It wasn’t about the wins and the losses, getting all-city and all-state and all that stuff,” he said. “It was just everything we did. We were a family. Guys I played with the last two years were guys I’d been playing with since the seventh grade. I love every one of them to death. I’m at where I’m at now because of those guys.”
Things haven’t always gone great for Hagins.
In his senior year at Airline, he suffered a stress fracture to his left ankle in the penultimate game of teh regular season and was unable to compete in the playoffs. With players like Hayden Hildebrand and Demetrius Early, the Vikings could very well have made it at least to the Top 28 and maybe won it all.
He was a contributor at UALR from his freshman season on, starting 19 games. But the Trojans had records of 17-15, 15-17 and 13-18 his first three seasons before putting everything together this season under new head coach Chris Beard.
One of the final things he told the Vikings was the importance of having a certain mentality and approach to the game.
“For me what made us so good wasn’t the talent,” he stressed again. “At the end of the day it was just going to war with your brothers. I’ll do anything for them to this day. It wasn’t about winning and losing. You weren’t going to disrespect us.”
Now that his amateur career is done, Hagins is looking forward to giving back. He’s already made several appearances at Airline since graduating.
On Monday, there was no doubt he made a strong impression on the current Vikings and gave them something to think about.