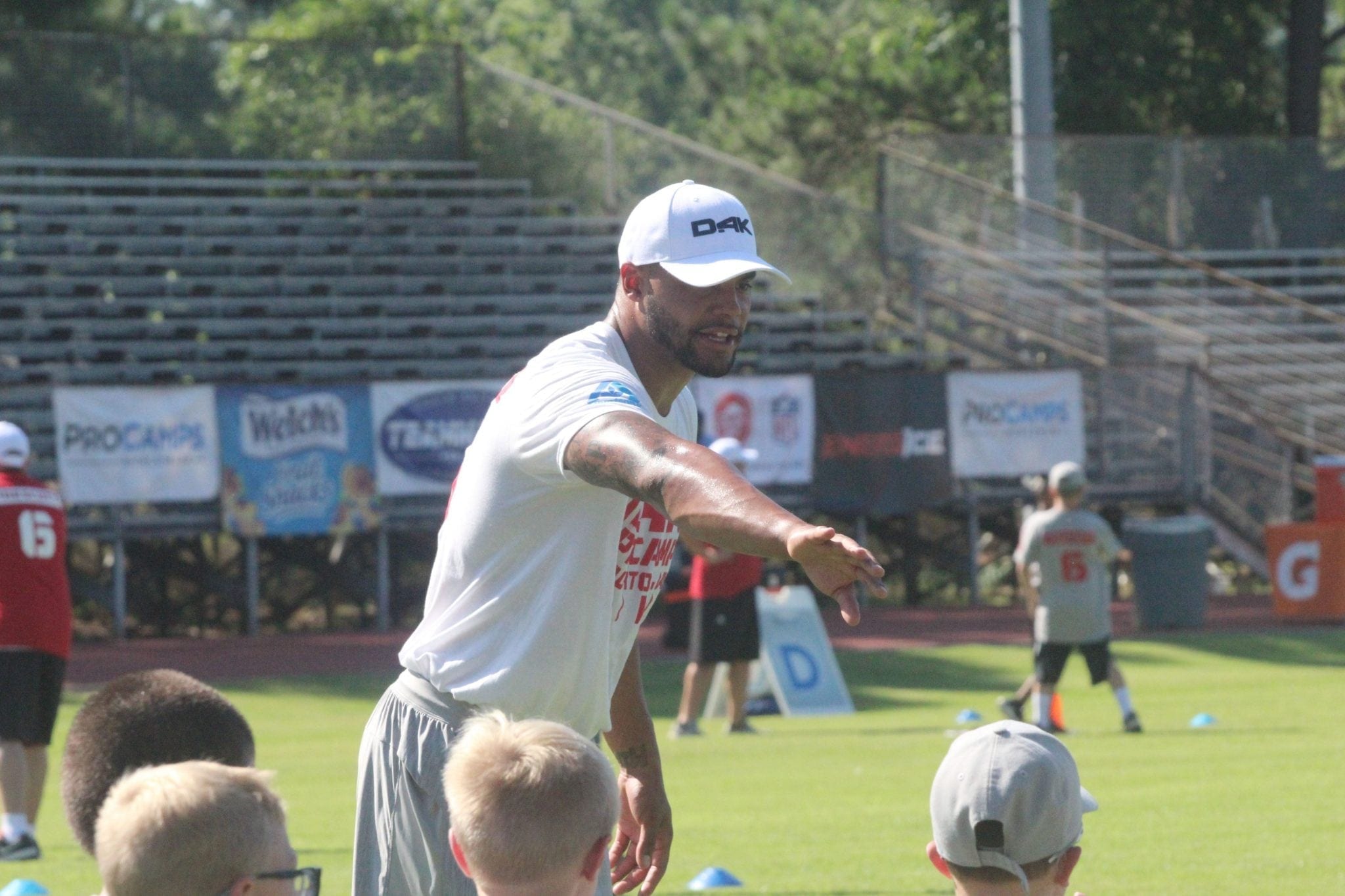 More than once last week, Dallas Cowboys quarterback Dak Prescott used the phrase ‘it’s humbling’ to describe how he felt being able to host a youth football camp in his hometown of Haughton.
He said as a little boy he dreamed of one day becoming an NFL player and putting on a camp at a place where he made some of his greatest memories.
For the second summer in row, he was able to do that. Last week, about 300 children in grades 1-8 participated in the Dak Prescott Football ProCamp at Harold E. Harlan Stadium.
Prescott started for two seasons at Haughton. In 2010, his senior year, he led the Bucs to a 10-0 record. Haughton finished 12-1 after losing to eventual Class 4A state champion Franklinton 49-41 in the quarterfinals of the playoffs.
He went on to star at Mississippi State and is about to enter his third season as the starting quarterback for the Cowboys.
Prescott said he isn’t surprised at how his career has gone so far.
“I always believed I’d be in the NFL,” he said during a press conference after taking photos and working with the kids for about an hour in the mid-morning heat.
“I always thought that I could. I always wanted to come back here and be able to put on a camp in my hometown. This was always a dream. I think it’s just a testament to the coaches, the people around, the support system.”
Prescott is eager for the NFL season to get here. After going 13-3 in 2016 when Prescott was named the NFC Offensive Rookie of the Year, the Cowboys went just 9-7 last season and failed to make the playoffs. So this season is obviously a big one career-wise.
But the camp last week was a trip down memory lane. In addition to working with the kids, Prescott got a chance to see some of his former Haughton teammates and coaches, including his middle school coach.
“So many memories,” he said “My Haughton teammates, they’re my best friends. To see all the guys I played with, to see coaches, to see my middle school coach, it’s crazy. It brings back so many memories of winning games and putting in a lot of time in the offseason as we did. It’s humbling.”
Prescott’s mother, Peggy, died of colon cancer in 2013. Prescott has spoken often of their close relationship and what she meant to him.
Asked what his mother would think of him hosting a camp at Haughton, he said she’d be proud.
“My mom always told me when she was proud,” he said. “She let it be known. My mom always had the same seat coming to these games. It’s special to be back, be back to a place like this.
“I grew up sitting in the stands with my mother watching my older brothers play to itching to get out on the field to actually coming out here and making a ton of memories. I’m just blessed to be here and see these kids. I see myself in their shoes, wanting to be an NFL player, having that dream. How exciting it was just to play football. I would’ve given everything at their age. For me to be able to come back and share some knowledge. Hopefully I’m inspiring them.”
Prescott leads a hectic life these days. The Cowboys completed their final offseason mini-camp last month and start preseason camp in a few weeks.
Prescott has endorsement deals with Adidas, Campbell’s Soup, Beats by Dre and Dannon, among others, according to the Dallas Morning News.
On the day of the Haughton camp, it was announced that Prescott had signed with Creative Artists Agency, which will handle matters relating to his football contract.
Being back in Haughton, he said, gave him a sense of rejuvenation. Again, he called it humbling.
“To see your middle school coach coming back and working the camp for you, I get emotional talking about things like that,” he said. “It’s a blessing to me. As I said, to be a little kid when I was their age wanting to do this and now doing it, it’s crazy.”
Prescott said the lessons learned at Haughton from coaches like then-head coach Rodney Guin and current head coach Jason Brotherton, then an assistant, set him on the right track.
“I had a great coaching staff that got the best out of me,” he said. “It was about being coachable, listening to them and putting it on the field. Not only that, being a good teammate.
“In high school, it’s easy to be selfish. It’s easy to want this and want that. I was the only one on my team that had a Division I offer that went to an SEC school or a big-time program so it could’ve been easy for me to be selfish. But I had such a great support system and cast, great teammates and friends that I wasn’t ever going to be selfish. It was always about being selfless and putting my teammates before me.”