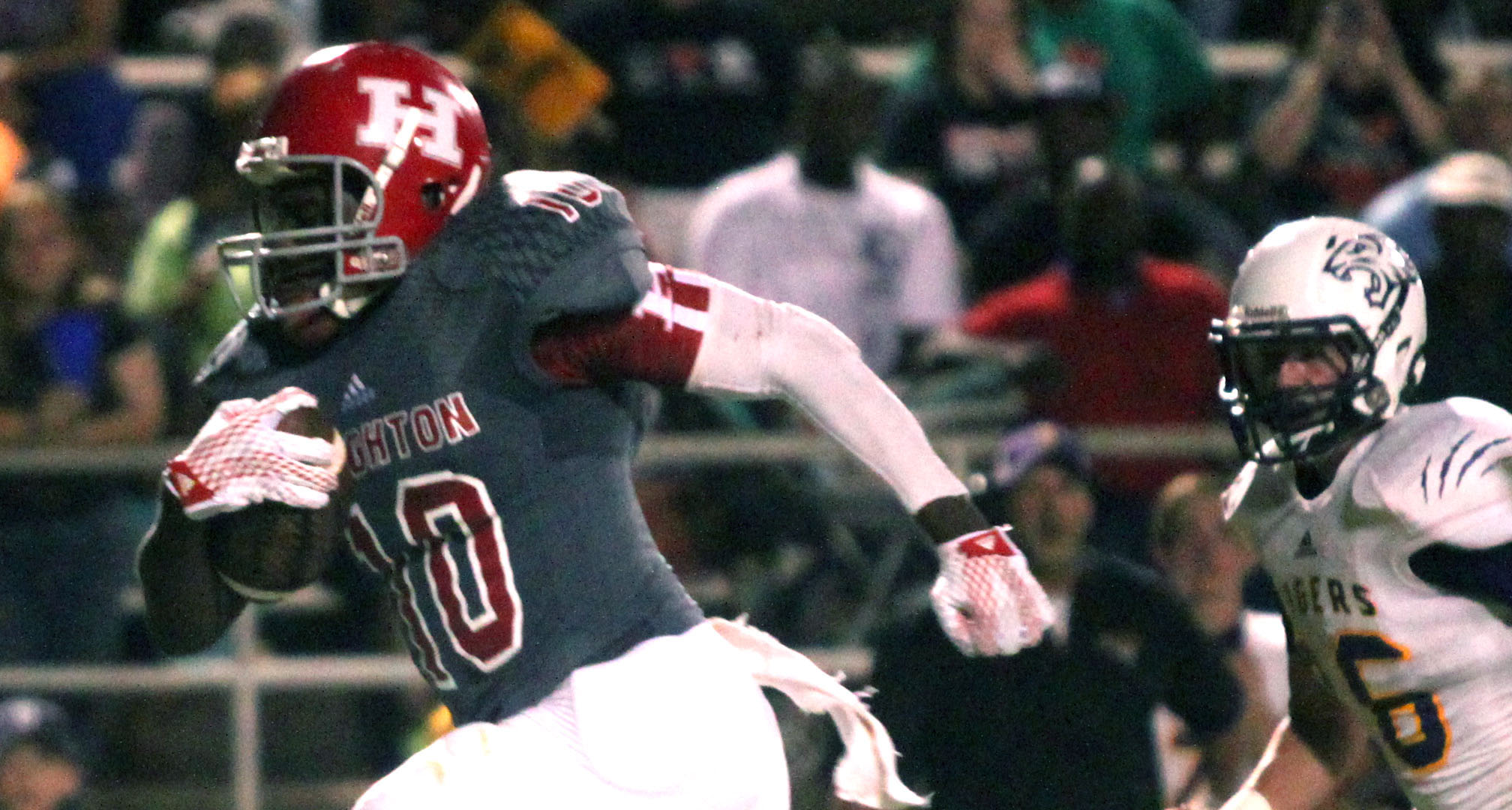 Not surprisingly, last week’s 62nd annual Bossier Lions Club Jamboree at Airline Stadium left more questions than answers going into Friday night’s high school football season openers.
All six Bossier Parish teams had some positive things happen. But every team also showed areas that need work.
In the three 24-minute “games,” the Bossier defeated Plain Dealing 14-2, Haughton downed Benton 20-7 and Airline edged Parkway 14-9.
Of course, every team is still 0-0. And while there was a lot of excitement with a near-capacity crowd on hand, coaches immediately turned their attention to the games that count this Friday.
In season openers, Airline hosts Union Parish, Haughton hosts Plain Dealing, Parkway visits Bastrop, Benton hosts Green Oaks and Bossier hosts Homer.
Bossier probably got the biggest boost out of the jamboree. The Bearkats didn’t win a game last season and won only one in 2013. So the Bearkats were right to be fired up after their victory.
Bossier trailed 2-0 at the half after a punt snap sailed out of the end zone. But the Bearkats’ Wing-T offense drove 50 yards for a TD with some good running by big Aareon Smallwood and quarterback Keimun Daniels. John Langston intercepted a tipped pass and returned it for a TD with 11 seconds left for the final score.
The Bearkats have a good chance of breaking their 15-game losing streak Friday night against Homer. But the Pelicans are coming off a tough 1-9 season and will be fired up, too. Glenn Kyle, who had success during his first stint, is back as Homer’s head coach.
Plain Dealing was without a couple of injured offensive linemen and new Lions coach James Thurman is breaking in a new quarterback. One of the Lions’ top returnees, lineman Ryan Penwell, transferred to Benton last week.
Plain Dealing, a Class 1A school, will be a huge underdog against 5A Haughton. The Bucs have about four times as many players as the Lions.
All Thurman wants to see this week is improvement over the jamboree. He said the first three games of the season are all about getting ready for District 1-1A play.
Haughton’s D’Kovin Ware broke two long touchdown runs in the Bucs’ victory over Benton. Jonathan Plant also recovered a punt blocked by T’Marquiese Winfield for a touchdown.
The first half was frustrating for both Haughton coach Rodney Guin and Benton coach Reynolds Moore. It lasted almost 50 minutes because of penalties on both teams sometimes on the same play. The referees spent a lot of time explaining what happened to Moore and Guin.
Benton didn’t play badly. The Tigers scored just before the half on a pass from Garrett Hable to John Westmoreland. Running backs Jermaine Newton and Doyle Adams Jr. showed some potential.
The Tigers defense, which lost most of the key players from last year’s team, gave up the long runs but also came up with some stops.
Benton is the favorite against Green Oaks, which didn’t score in its jamboree against Captain Shreve. Starting quarterback Jaylon Carey, one of the area’s best athletes, also suffered an unspecified leg injury and had to leave the game.
The Airline-Parkway “game” was a tale of two halves. Parkway dominated the first half and led 9-0 on a 52-yard pass from Keondre Wudtee to Robert McKnight and a 24-yard Harrison Hopkins field goal as time expired.
Airline’s offense struggled in the first half. The Vikings failed to score after recovering a muffed punt at the Parkway 18.
DeAngelo Pouncy’s 25-yard interception return for a TD early in the second half ignited the comeback. The Vikings intercepted Wudtee three times, including a couple on what were basically jump balls.
Airline’s offense came alive when it needed to, driving for the winning TD. Brian Fielding had a couple of nice runs. Thomas McKain completed an 11-yard pass to Darian Germany for the winning score.
Airline and Parkway have very interesting season openers.
The Vikings face a Union Parish team that is coming off a 9-1 season. But the Farmers were routed by Calvary Baptist in their jamboree.
Bastrop looked good in its jamboree, a 20-7 victory over Ouachita Parish. Former head coach Brad Bradshaw is back at the helm.
The Panthers and the Rams have played high scoring games the last two seasons. It could be that way again.
By his standards, Wudtee — a Louisiana Tech commit who was the Offensive MVP on the All-Parish team last season — struggled somewhat in the jamboree.
I don’t expect him to do that Friday night. The Panthers will put some points on the board. Bastrop may score some too, but I expect Parkway’s defense will rise to the occasion when it counts.