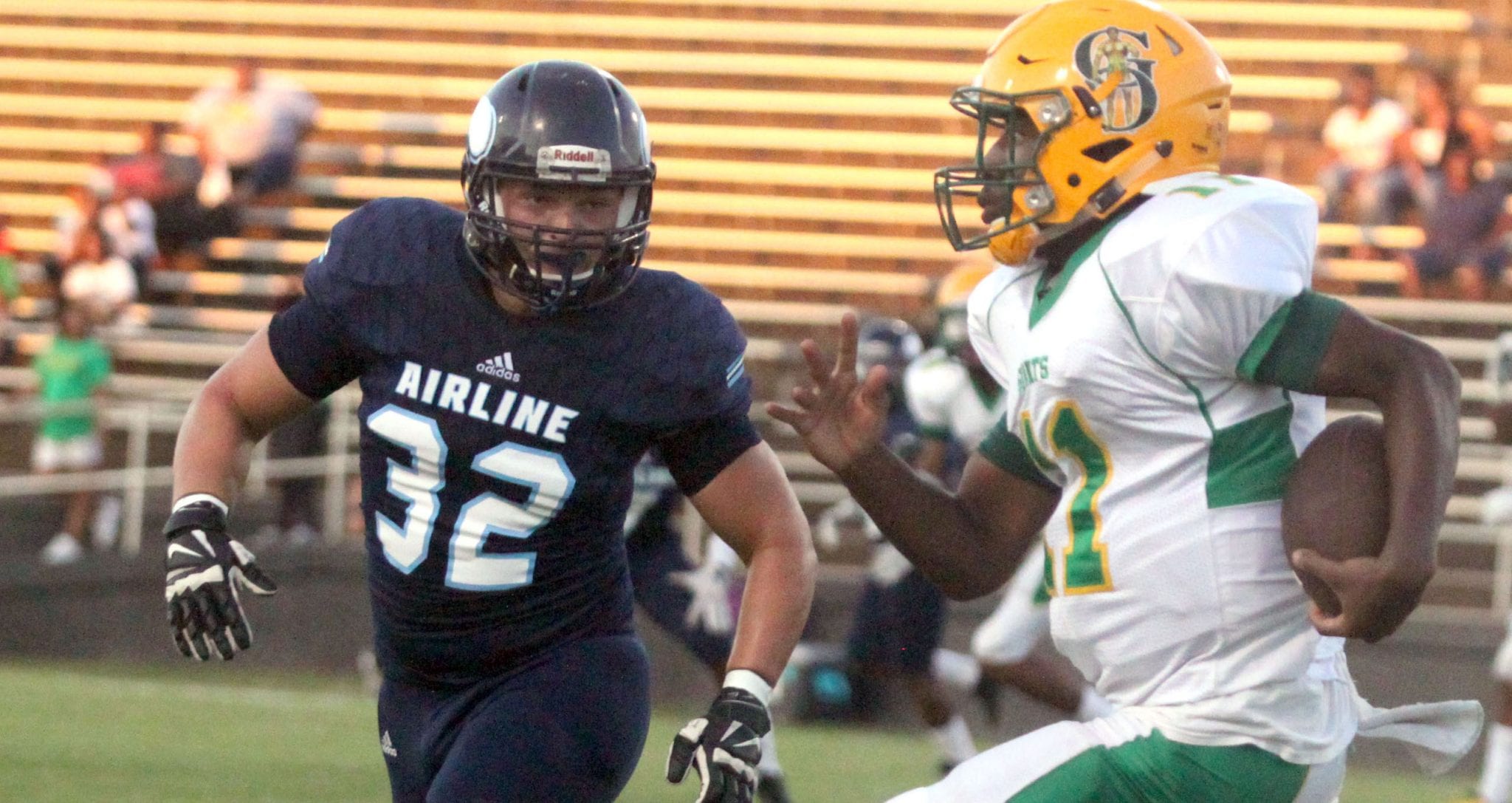 Two weeks into the high school football season, Bossier Parish teams have won 10 games and lost just two.
The six teams went 5-1 for the second straight week last week.
The Haughton Buccaneers suffered the lone loss, falling to the Minden Crimson Tide 23-20 in a hard-fought battle that went down to the wire in Haughton.
Elsewhere, Airline defeated Green Oaks, 30-8, Parkway downed Lufkin, Texas, 69-54, Benton routed Natchitoches Central 44-8, Bossier dropped General Trass 20-6 and Plain Dealing pounded Lakeside 60-26.
Friday night, Airline (2-0) hosts Ruston (1-1), Benton (2-0) meets Southwood (1-1) at Lee Hedges Stadium, Haughton (1-1) hosts Woodlawn (2-0), Bossier (2-0) hosts Logansport (2-0), Parkway (2-0) hosts Huntington (1-1) and Plain Dealing (1-1) faces St. Mary’s (1-1) at Northwestern State’s Turpin Stadium.
Airline struggled mightily against Green Oaks, which was coming off a 51-0 loss to Benton, in the first half.
Sophomore quarterback Brad Fream was under tremendous pressure and on several series the Vikings had a tough time just getting past the line of scrimmage.
But Airline turned it around in the second half. Fream finished with four touchdown passes. Coby McGee also continued to show he’s a playmaker. McGee scored Airline’s lone TD in the first half on a perfectly thrown pass from Fream. He also set up one in the second half with long run.
The Vikings defense put on another impressive performance. Green Oaks scored on a long pass in the first half. Airline shut the Giants down otherwise.
That defense will face its biggest challenge so far against Ruston, which broke into the win column last week, routing East Feliciana 45-18.
Airline coach Bo Meeks made it clear to his players after the game that they can’t play like they did in the first half and expect to win against teams like Ruston and the brutal 1-5A schedule down the road.
The defense is good enough to keep Airline in every game. If the offense can improve, the Vikings will have a good chance of defeating the Bearcats for the third straight year.
Haughton faces another big challenge against Woodlawn and running back Trivenskey Mosley, who rushed for 202 yards in last week’s 32-18 victory over Booker T. Washington.
The Bucs played a great third quarter against Minden and led early in the fourth.
“From the nine-minute point on they made all the big plays,” Haughton coach Jason Brotherton said. “We made some mistakes. We had a turnover. We dropped a pass that was going to be a big play. They got the fake field goal.”
The Tide scored the go-ahead TD after the fake field goal.
Wide receiver Josh Lister had 116 yards receiving and Lavonta Gipson rushed for 92 yards.
Pryce Curry found his rhythm in the second half and passed for 225 yards.
If the offense can produce again and the defense contains Mosley, the Bucs should come out on top.
The Parkway defense will be looking for some redemption after giving up 54 points last week.
Huntington’s offense won’t be as good as Lufkin’s, but the Raiders have scored 62 points in their first two games.
Huntington, though, has allowed 72. Last week, Parkway scored 69 and rolled up 826 total yards against a tough Lufkin team.
The Panthers might not score that much this week but they’ll score a lot. The backups should see plenty of playing time.
Benton avenged its lone loss of the 2015 regular season last week, racing to a 28-0 first-quarter lead.
The Tigers scored in a variety of ways — punt, fumble and interception returns among them.
Southwood is coming off its first victory in two years, 12-0 over Fair Park.
Benton has outscored its first two opponents 95-8, but coach Reynolds Moore expects Southwood to provide a challenge, especially coming off the win.
Maybe so, but the Tigers should be 3-0 heading into next week’s District 1-4A opener against Huntington.
Bossier’s home opener against Logansport is another intriguing matchup. Logansport is just a Class 1A team, but this should be the Bearkats’ toughest test so far.
The Tigers have piled up 85 points in their first two games. Bossier has allowed only two touchdowns. Last year, the Bearkats won 35-34. This should be another close game.
If Bossier can avoid turnovers and minimize Logansport’s big plays, I can see the Bearkats winning another close.
Plain Dealing got its offense rolling against Lakeside last week. Texas A&M commit Keldrick Carper scored five touchdowns.
Matt Sullivan passed for 167 yards and three touchdowns. Demeiko Ford rushed for 112 yards.
St. Mary’s suffered a somewhat surprising 20-6 loss to North Caddo last week.
The Tigers routed the Lions 54-6 last season. This game should be much closer with St. Mary’s being a slight favorite.
If Sullivan, Carter, Ford and Derreon Washington can continue to produce, the Lions could pull the upset.