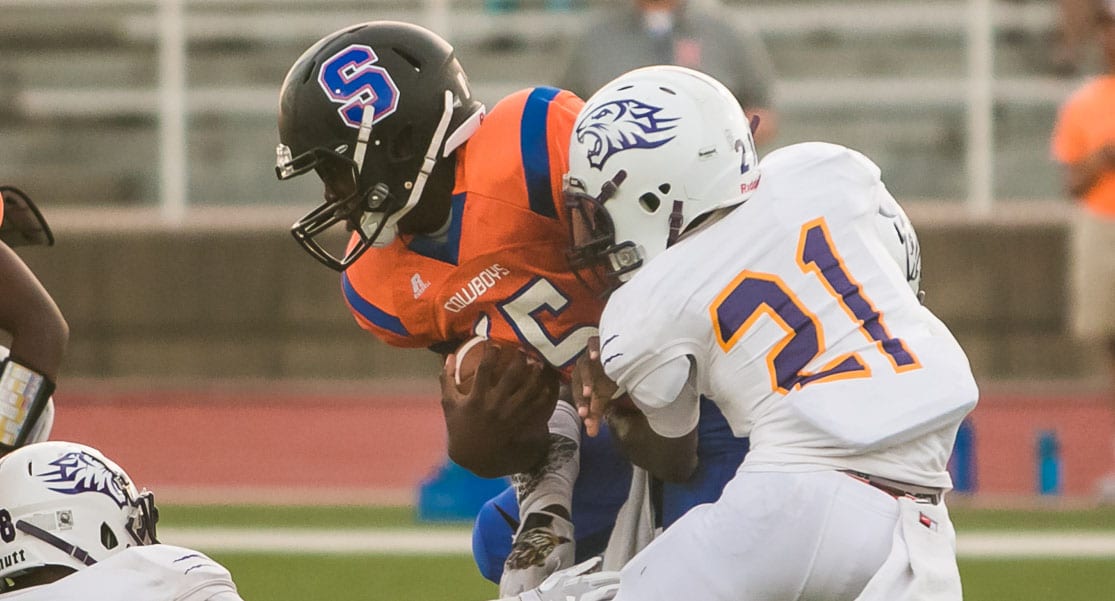 Hard as it is to believe, the high school football regular season hits its halfway point this week.
Going into Week 5, it’s been a pretty successful season for Bossier Parish teams so far.
Every team has a winning record except Bossier, and the Bearkats are 2-2.
There’s still a lot of football left to be played.
One thing is clear now, though. After its 45-8 victory over Parkway last week at Preston Crownover Stadium, Evangel Christian Academy is a big favorite to win the District 1-5A championship.
The Eagles dominated the Panthers in every phase of the game, especially at the line of scrimmage.
They had more experience and were bigger, quicker and stronger for the most part.
The good news for Parkway is the Panthers won’t have to face Evangel in the playoffs. The Eagles (2-2, 1-0) are in select Division I.
Also, Parkway lost big to Evangel last year and advanced to the Class 5A semifinals, losing to eventual state champion Zachary.
So all the Panthers (3-1, 0-1) can do is tip their cap to the Eagles and get ready to face another Division I team, Byrd, Thursday night.
Last week, I said don’t count the Yellow Jackets out just yet despite their winless record. I also said it’s wait-and-see on the Captain Shreve Gators.
Well, what we saw was Shreve defeat Byrd 34-7 and improve to 4-0. It was the Gators’ first win over the Jackets since 2009.
Byrd fumbled nine times, including two muffed punts.
The Jackets’ run-oriented option offense is based on timing. That takes hours and hours of practice with the same players to perfect. Byrd had a new quarterback against Shreve.
The Jackets lacked experience coming into the season and have been hit hard by injuries.
I still think Byrd has a chance to be a good football team before the season is over.
I’m sure the Parkway players were a bit embarrassed by the big loss to Evangel and will be eager to prove they still have what it takes to be a state title contender.
I expect to Panthers to come out strong and win big.
Airline (3-1, 1-0) gets a chance to knock off Shreve in a District 1-5A game Friday at home.
Playing without running back Brian Fielding and return specialist/receiver Coby McGee, the Vikings downed Southwood 17-0 last week.
I don’t believe the Gators have run up against the team with a defense as good as Airline’s.
Shreve definitely has a lot of momentum and is playing well. But I believe Airline will triumph in a close, low-scoring game.
Haughton (3-1), which defeated Green Oaks 34-6 in its final non-district game last week, opens 1-5A play against Southwood (1-3) at home.
The Bucs have played good football so far this season, losing only to undefeated Minden 23-20.
It looks like Coach Jason Brotherton’s team is still relatively healthy, too.
Southwood has struggled on offense. The Cowboys have played a tough schedule with losses to Minden, Benton and Airline.
Haughton has forced 11 turnovers in its last two games. If the Bucs continue to play opportunistic ball, they shouldn’t have much trouble with the Cowboys.
Benton (4-0) opened defense of its District 1-4A championship with a 44-13 rout of Huntington last week.
There is little doubt the Tigers are headed to the playoffs. But their chances of winning a third straight district championship will likely hinge on the next two games. And both are on the road.
First up is North DeSoto (3-1) Friday night in Stonewall. The Griffins have one of the area’s best running backs in Delmonte Hall, but they also have other offensive threats.
Their only loss was 34-33 to Class 2A No. 2 Many on the last play of the game on the road.
The Griffins are averaging 38.8 points per game.
Benton, meanwhile, is averaging 48.5. This will be by far the Tigers’ toughest test of the season. The Tigers’ young defense will be challenged.
I believe the game is a toss-up. If it were in Benton, I’d say the Tigers were a slight favorite.
Benton has won by a touchdown each of the last two seasons. It could be that close again.
North DeSoto defeated Bossier 35-21 last week after building a 35-0 lead.
The Bearkats took advantage of some late fumbles to give the Griffins a bit of a scare in the fourth quarter, but the outcome was never seriously in doubt.
Bossier (2-2, 0-1) faces Woodlawn (3-1, 1-0) Thursday at Independence Stadium. The Knights defeated Northwood 30-27 last week in a wild 1-4A opener.
Bossier wasn’t able to generate much offense against the Griffins. The Bearkats should fare better against Woodlawn.
The Knights have some outstanding offensive players, including quarterback Joshua Mosley and running back Trivenskey Mosley.
The best chance Bossier has is keeping them on the sideline by sustaining drives. If the Bearkats can do that, they have a chance.
Plain Dealing (3-1, 1-0) equalled its win total of last season with a 28-14 home victory over Homer in a District 1-A opener last week.
The Lions have stayed healthy and have about 30 high-school age players active.
Plain Dealing will be a heavy underdog on the road Friday against perennial powerhouse Haynesville (4-0, 1-0).
The Tors have had a couple of close games against teams in higher classifications.
Plain Dealing will have to play lights out just to keep it close. The best thing will be for the Lions to come out of the game still healthy and stay on track for a winning season.