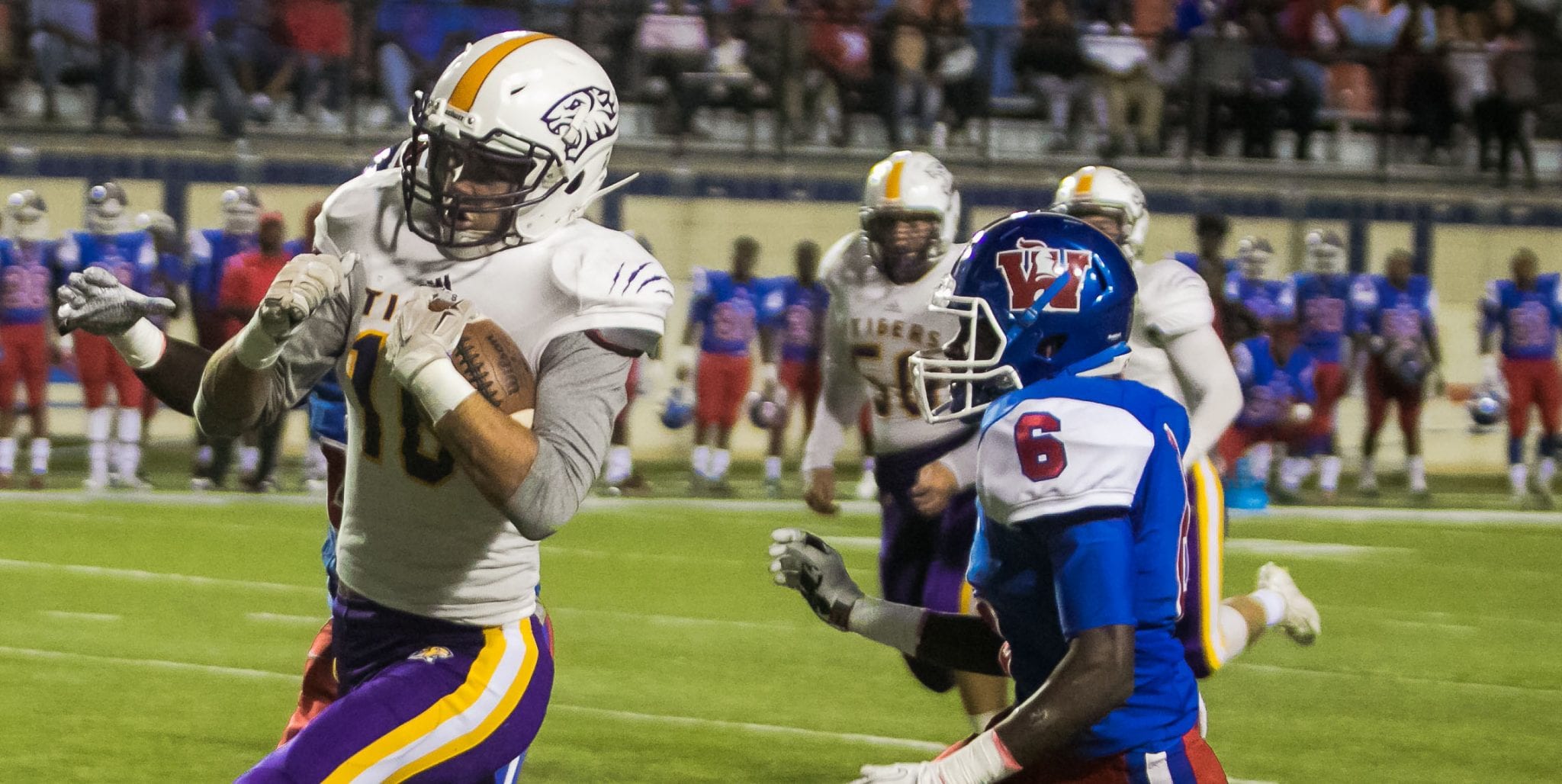 Week 8 of the high school football regular season was one to forget for Bossier Parish teams.
Only the Parkway Panthers came out a winner and that was at the expense of another parish team.
The Panthers turned a halftime tie into a runaway 45-14 victory over the Haughton Bucs with four unanswered touchdowns in the third quarter.
Parkway (7-1, 3-1) hosts Southwood (1-7, 0-5) Friday night. Haughton (4-4, 1-3) goes from the proverbial frying pan into the fire, traveling to West Shreveport to face district leader Evangel Christian Academy (6-2, 4-0).
The Eagles continued their domination of 1-5A with a 45-7 victory over Airline in a battle for the district lead at Airline Stadium. Evangel has won its four district games by an average margin of 46 points.
The Vikings (6-2, 3-1) face longtime nemesis Byrd (3-5, 2-2) Friday at Lee Hedges Stadium. The Jackets are riding a three-game winning streak after last week’s 28-6 non-district victory over Green Oaks.
Airline has lost 13 straight games to Byrd. I believe the drought will end Friday.
The Vikings defense didn’t play that badly against Evangel. It was simply on the field too long. The Vikings, who lost quarterback Brad Fream and running back Brian Fielding to injuries in the first half, couldn’t move the ball against an Evangel defense that ranks among the state’s best.
Regardless of the injury situation, Airline should have some success against Byrd offensively. The defense may not completely shut down an improving Jackets offense, but it should be able to get stops and perhaps force some turnovers.
Byrd won’t go down without a fight, though. Coach Mike Suggs will make sure of that.
Meanwhile, Parkway should win big against a Southwood team that’s struggled to score all season. Haughton will no doubt compete hard against Evangel, but the Eagles are simply too tough. However, if the Bucs can put together four great quarters, maybe they’ll prove me and everyone else wrong.
Benton saw its hopes of a third straight District 1-4A title end with a 54-28 loss to Woodlawn (7-1, 5-0) at Independence Stadium.
The Tigers got a few bad breaks and didn’t play up to coach Reynolds Moore’s standards. But they also ran up against a Woodlawn team playing with a lot of confidence.
Benton couldn’t stop running back Trivenskey Mosley, who rolled up 177 yards. Quarterback Joshua Mosley also caused some problems.
The Tigers (6-2, 3-2) face Northwood (2-6, 1-4) Friday at Jerry Burton Memorial Stadium. The Falcons played undefeated Minden a fairly competitive game last week before falling 39-20.
Northwood may give the Tigers some trouble early, but I expect Benton to bounce back in a big way. In fact, the Tigers should finish the regular season 8-2 and get a reasonably high seed in the 4A playoffs.
Bossier’s playoff hopes took a hit with last week’s 22-16 home loss to Fair Park (2-6, 2-3). The game was tied at 16 going into the fourth quarter. The Indians scored and the Bearkats couldn’t answer.
Bossier (3-5, 1-4) hosts the Huntington Raiders (1-7, 0-5) Friday. This is another game they can win. They’ll need it to assure a .500 regular season with Benton looming in Week 10.
A 5-5 record just might be good enough to get the Bearkats in the playoffs. Regardless, a .500 season would be a major accomplishment for a team that won four games in the previous three seasons.
The Plain Dealing Lions (4-4, 2-2) still have a solid shot at a winning season after last week’s 32-6 loss to a tough Cedar Creek team.
The Lions host D’Arbonne Woods Charter (0-8, 0-4) Friday. D’Arbonne Woods is actually 4-4 on the field. The Timberwolves had to forfeit their four wins through Week 7 for using an ineligible player. Last week, they lost to a good Arcadia team 33-16.
Plain Dealing probably needs to win one of its last two to host a first-round Class 1A playoff game. A tough road game against Arcadia awaits in Week 10.