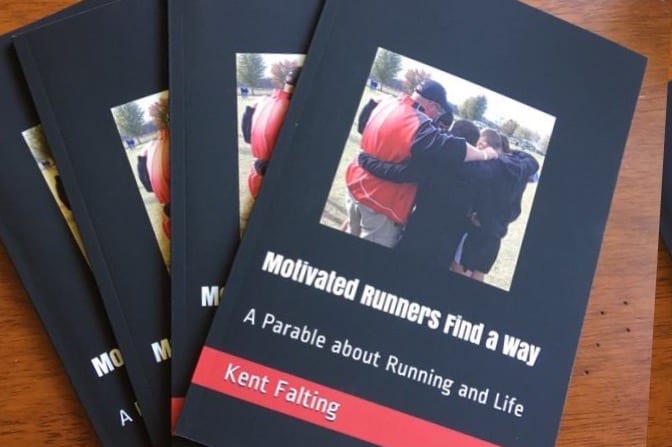 In 12 years coaching cross country and track at Parkway, Kent Falting believes he has a found a formula for success.

The results bear that out. In a sport dominated mostly by private schools, Falting has won two state cross country championships. In 2015, Parkway became the first school to sweep the individual titles in Class 5A.

Last year, Parkway’s boys cross country team was the 5A runner-up and the girls finished third.

Now Falting has written a book which lays out his philosophy for success. It’s called “Motivated Runners Find A Way” and subtitled “A Parable about Running and Life.” (amazon.com, Kindle edition $8, paperback $9).

Falting uses fiction as his tool.

After being beaten at the wire in the mile run at the state meet, self-centered distance runner Jack does something that gets him kicked off the team by Coach Morris. Thanks in part to a mentor — a former state champion runner at the school — Jack uses Falting’s principles to make amends in an attempt to be reinstated to the team.

That is the book’s basic plot.

However, the formula for success is not served to Jack on a silver platter. He has to find it out for himself, sometimes through making mistakes, in order to become the kind of runner — and person — the fictional Coach Morris believed he had the potential to be.

A parable is “a simple story used to illustrate a moral or spiritual lesson, as told by Jesus in the Gospels.”

Falting does a good job of keeping his story simple and to the point. It’s a quick read. It took me just over an hour to read it one afternoon.

If you want to know all of Falting’s building blocks of success or Jack’s fate you’ll have to read the book yourself.

But here’s one hint. Cross country and track are often seen as individual sports with a team aspect. Falting looks at it as the opposite. Regardless of the outcome of a race, there is no success without putting team above self.

Of course, that’s not a new idea.

In a video with millions of views on social media recently, Sam Houston State baseball coach Matt Deggs drove home that point in a press conference after his team was eliminated from a Super Regional.

This is a lesson Jack has to learn the hard way in the book.

In both the foreword and afterword, Falting stresses that his philosophy could just as easily be applied to other sports, the business world and life in general.

He also says that following the formula doesn’t guarantee success or mean there won’t be setbacks. But those setbacks will be nothing compared to where you might find yourself at the end of the process.

Russell Hedges is Sports Editor for the Bossier Press-Tribune. He can be reached at rhedghes@bossierpress.com