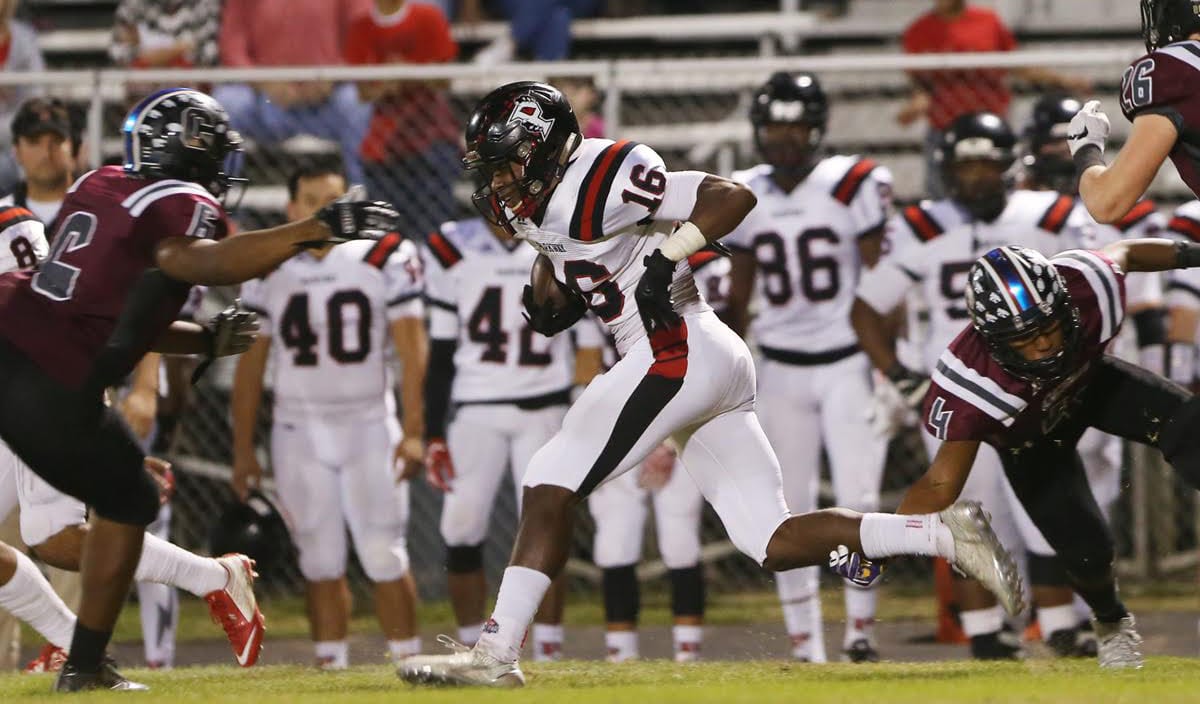 Bossier Parish teams went an impressive 3-0 in the second round of the LHSAA football playoffs last week.
Parkway, the No. 4 seed in Class 5A, rallied past upset-minded No. 20 seed Central 26-14 in Baton Rouge.
The Panthers (11-1) host No. 5 Landry-Walker (10-2) at Preston Crownover Stadium in the quarterfinals Friday.
Based on where they were seeded in the bracket, Benton and Plain Dealing’s seasons should be over now.
But the Tigers and Lions are on the practice field during Thanksgiving week after upsets.
Benton, the No. 10 seed in Class 4A, knocked off No. 7 Rayne 28-14 in Rayne.
The Tigers (10-12) now must travel to New Orleans to take on No. 2 seed Edna Karr (11-0).
Plain Dealing, the No. 13 seed in Class 1A, stunned No. 4 Oberlin 14-6 in Oberlin.
The Lions (6-6) visit Oak Grove (9-3) in the second round.
When Parkway and Landry-Walker take the field, several of the state’s top players will be on display.
Parkway features two of the nation’s top prospects in the Class of 2018 in quarterback Justin Rogers and receiver Terrace Marshall Jr.
Senior running back/receiver Robert McKnight has committed to Texas-San Antonio.
Landry-Walker features senior quarterback Keytaon Thompson, a Mississippi State commit, and running back Tevin Bush, a West Virginia commit.
Wide receiver Devonta Jason and cornerback Corione Harris also highly-covented players.
The 6-foot-4 Thompson completed 17 of 27 passes for 410 yards and four touchdowns with one interception in a 50-24 second-round win over No. 12 Sulphur last week.
According to a story on cbssports.com, Thomas has passed for 3,100 yards and 36 touchdowns and rushed for 1,105 yards and 19 TDs.
Jason had four catches for 152 yards and a touchdown against Sulphur. Bush rushed for 115 yards and two TDs.
Remember all the way back in Week 2 when Parkway defeated Lufkin, Texas, 69-54 in the Landers Battle on the Border.
Well, with so many talented offensive players in the game there could be another shootout Friday night.
The good news for Parkway is the Panthers defense is coming into the game with a lot of confidence.
Parkway’s offense struggled somewhat against Central, but the defense allowed only one offensive touchdown.
With the Panthers trailing 14-13 early in the fourth quarter and the Wildcats looking to add to the lead, Derious Bradford forced a fumble and Tony Beckwith returned it 90 yards for a touchdown.
The Charging-Buccaneers have won 10 straight since opening the season with losses to John Curtis, 35-24, and Edna Karr, 42-34.
Curtis, the top seed in Division I, and Karr, the No. 2 seed in Class 4A, are both undefeated.
Parkway is riding an eight-game winning streak.
I truly believe this game is a tossup. In the Parkway-Lufkin game, the Panthers made a few crucial defensive stops and forced some turnovers.
Whichever team accomplishes that Friday will likely come out on top.
Benton, which is in the quarterfinals for the second time in three years, will be facing a Karr team averaging a tad under 50 points per game.
Starting at Week 3, the Cougars haven’t scored less than 50 points. They’ve scored 60 or more three times.
Karr’s closest game was 35-28 in the season opener against St. Paul’s, which lost to Evangel 28-21 last week in the second round of the Division I playoffs.
Last week, Aldon Clark completed 12 of 13 passes for 263 yards and five touchdowns in a 55-0 victory over No. 18 Leesville.
Benton’s victory over Rayne on the road was impressive. The game was delayed early in the fourth quarter by lightning from a line of thunderstorms that moved through.
Quarterback Garrett Hable scored a pair of rushing touchdowns. Jermaine Newton went 40 yards on a fake punt. Sam Simmons scooped up a fumble and raced 50 yards to the end zone.
The Tigers will head down to New Orleans as big underdogs. But at this stage of the season anything’s possible.
If Benton can get off to a good start, the Tigers will have a chance. If not, it will be a challenge to come back against a team as talented as Karr.
Plain Dealing doubled its win total of last season with the upset of Oberlin.
Shavolyea McKinney scored a rushing TD, and Keldrick Carper returned a punt 75 yards for a score.
Oberlin didn’t come close to scoring in the second half against a tough Lions defense.
Oak Grove has scored an incredible 60-plus points in four straight games, including last week’s 61-8 second-round win over Delhi.
The Tigers have won nine straight after an 0-3 start. Their closest game in that stretch was an 18-12 victory over District 1-1A foe Delhi Charter in Week 8.
Like Benton, Plain Dealing is playing with a lot of confidence now.
And like Benton, the Lions will need to get off to a good start Friday night. If they do, they may rattle the Tigers a little.
Plain Dealing is a big underdog, too. But the Lions were in the same situation against Oberlin and look how that one turned out.

Russell Hedges is Sports Editor of the Bossier Press-Tribune. He may be reached at rhedges@bossierpress.com
— Feature Photo/Robert Summerlin/Special to The Press-Tribune