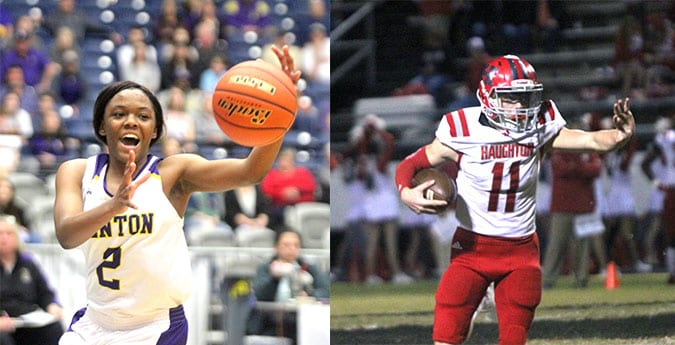 Last week, I looked at how Bossier Parish schools fared during 2018-19.
As was mentioned, five schools combined for 18 district championships. So needless to say, Bossier Parish once again had more than its fair share of outstanding athletes.

In this column, I’ll look at some of those. I’ll also try to come up with the best of the best. As usual, it won’t be easy. And there is, of course, always the risk of leaving someone deserving out.

Obviously, one of the main criteria for being one of the “best of the best” is excelling at more than one sport.

But that doesn’t mean one-sport specialists aren’t elite athletes. You have to be a great athlete to win an individual state title or be recognized as one of the state’s best in a sport.

For example, Bossier’s Jacoby Decker was the Outstanding Player on the Class 4A boys All-State basketball team, and Benton’s Emily Ward was a first-team girls All-State selection.

Although both only played one sport this past year, they are obviously among the top athletes in the parish.

I also believe several Airline softball players fit into this category.
But for the purposes of this column, which has become a yearly tradition, I’ll focus on athletes who excelled at multiple sports.

Michael Schoth was a standout in football and track.

Ashur Hall and Malik Antwine excelled at both football and track and field.

Airline: Devin Bilbo was the 1-5A runner-up in the 110 hurdles and a standout basketball player. Brandon Marshall was first-team All-Parish in football and the 1-5A long jump runner-up.

Joshua Burns, Taejon Morris, Gabriel Cole and Goffrey Cole combined to win the Class 5A 4X800 relay. Morris, Burns and Gabriel Cole finished in the top four in the 1-5A cross country meet.

Haughton: CJ McWilliams and Peyton Stovall are also among the best.
McWilliams was the Offensive MVP on the All-Parish football team. He was also second-team All-Parish in baseball.

McWilliams ran in only one track meet all season, but he finished third in the 100 in the District 1-5A meet.
Stovall was first-team All-Parish in football and baseball.

Parkway: Connor Cloinger was first-team All-Parish in football and a state wrestling champion.

Amani Larry was first-team All-Parish in baseball. His senior season as quarterback of the Panthers was cut short by an injury.

Kentravious Morris was first-team All-Parish in football and the 1-5A runner-up in the 200.

Kobe Gill was a solid receiver on the football team and the 1-5A high jump co-champion. Chase Turner competed on a high level in football and basketball.

Bossier: Decamerion Richardson started the school year at Airline, where he was a member of the football team. He transferred to Bossier and excelled in track, making the awards stand in the 4A state meet in the 100, high jump and 200.

Coleman Beeson was first-team All-District in baseball and second team in soccer. He also played football, making him a rare three-sport athlete.

Esaul Damian was the district soccer co-MVP and a regional qualifier in track. Rico St. Fleur was first-team All-District in soccer and played football.

Benton: Qua Chambers was first-team All-Parish in basketball. She also qualified for the regionals in four track events and was the district runner-up in the high jump and 400.

Abbie Wynn was second-team All-Parish in basketball and the district runner-up in the javelin.

Airline: Gabby Patronis was first-team All-District in volleyball and a state tennis qualifier.

Zahria Lloyd was the district volleyball MVP. Her basketball season unfortunately ended early because of a knee injury.

Parkway: Faith Ingles was first-team All-District in softball and second team in soccer.

Peyton Pipes was the district co-MVP in soccer. She also was the 1-5A champion in the javelin and regional runner-up.

Morris won the 1-5A pole vault and finished seventh in cross country.

Bossier: Kelcee Marshall was second-team All-Parish in basketball and a regional qualifier in track.

Rebecca Washington was a track regional qualifier and honorable mention All-District in soccer.

So, then, who were the top male and female high school athletes in Bossier Parish?

For the boys, it’s pretty tight among Benton’s Horton and Simmons, Haughton’s McWilliams and Stovall and Bossier’s Richardson.

I have to go with McWilliams. The third-place finish in the 100 was extremely impressive, especially considering he hadn’t even been running track.

On the female side, I would have to say it comes down to between Chambers and Pipes. Chambers gets the edge for helping Benton reach the Class 4A championship game in basketball and qualifying for regionals in four track and field events.

While Horton and Simmons have graduated, McWilliams, Stovall, Chambers and Pipes were all undergraduates.

Several of the other athletes mentioned above will also be back in 2019-20.
Of course, not everyone can be All-Parish or All-District or a state champion. But everyone can play their roles on their respective teams to the best of their ability.

Kudos to all the athletes in Bossier Parish who did that this past year.