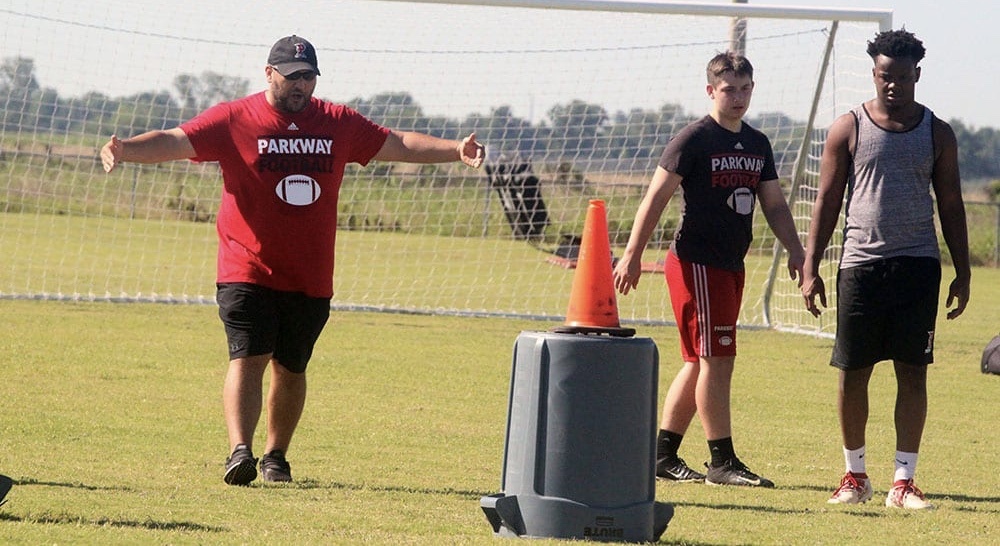 In my June 24 column taking a look at some of the top returning offensive football talent in Bossier Parish, I took an optimistic approach regarding the status of this fall’s high school football season.

I wrote that, in my opinion, it’s looking more and more like we’ll have a season and that it will start on time,

But that column went to press on June 22, the day Gov. John Bel Edwards announced that Louisiana would remain in Phase 2 of the state’s re-opening until at least July 19.

That means summer workouts in all sports will remain under the Phase 2 guidelines and restrictions outlined by the LHSAA a few days before workouts began on June 8.

The guidelines, of course, were issued in response to the COVID-19 pandemic that shut down schools and sports in mid-March.

Needless to say, Edwards’ announcement put a damper on things. Everything is still in a wait-and-see mode.

“That’s kind of what I think,” Parkway head football coach Coy Brotherton said last Saturday. “I think obviously not going into Phase 3 anytime soon — from the coaches I’ve talked to and even myself that was kind of the first big blow and the first time you think maybe we’re not going to start on time.

“Just because everything now has been pushed back and there’s not any wiggle room.”

Brotherton said the governor’s announcement made him wonder for the first time about the possibility of losing a scrimmage and maybe even the first few weeks of the regular season.

LHSAA Executive Director Eddie Bonine sounded an ominous note after last week’s Executive Committee meeting when he answered “yes” when asked if the football season could be delayed if Louisiana doesn’t move into Phase 3 later this month.

“We’ve got to get to Phase 3 which allows for contact sports by the end of July to start on time,” he told The Advocate.

If you’ve followed any of the reporting about the status of the season I’m sure you noticed how words like “might” and “may” and “could” and “possibility” show up a lot.

One word that doesn’t is “will” because simply nothing is definite.

Some definitive news did come out of last week’s Executive Committee meeting.

The fall and spring sports seasons will not be flipped. That idea was bandied about among coaches and some in the media.

But there was a lot of pushback from baseball, softball and track and field coaches. They rightly pointed out that if schools have to be closed again in the fall, their sports will lose two straight seasons.

While football has been the main focus because of its high profile and the fact that it has the most student-athletes competing, volleyball and cross country could also be affected.

Airline head volleyball coach Regina Digilormo held off starting workouts until June 29, when Phase 3 was supposed to be in effect. After the governor’s announcement, she posted a notice on Facebook that new players, including freshmen and transfers, would not be able to work out with the team now.

A big issue in football when it comes to the spread of the coronavirus is obviously contact among the players. Some contact could also be an issue in volleyball. Social distancing issues could be factors in both volleyball and cross country.

The bottom line is at some point in the near future the LHSAA will have to make the plans for all fall sports season definitive.

There’s too much logistics involved to just leave things in limbo. Of course, something could happen after that which could force another change in plans.

The annual Bossier Parish Lions Club football jamboree is scheduled for August. 28 with the first regular-season games set for Sept. 4. The first volleyball matches and cross country meets are Aug. 31.

Several questions obviously remain to be answered. Among those is whether fans will be allowed at any events, including jamborees. My guess is that parents and/or guardians of athletes will have to be allowed. That should make for easy social distancing.

First and foremost, the safety and health of the student-athletes, game officials, coaches, fans and everyone else involved in staging a game, match or meet must be considered when making these decisions.

One good thing is that apparently no athletes at Bossier Parish schools have tested positive for COVID-19 since summer workouts began. That’s not the case in some other parishes, including Bossier Parish’s neighbor Webster.

Athletes have reportedly tested positive at North Webster and Minden, causing officials to suspend workouts at all schools.

For now, Brotherton and the rest of the Bossier Parish coaches are continuing to do what they can to get their teams ready.

“I think it’s just a guessing game for anybody and everybody right now,” he said. “I don’t think anybody really knows. Even with Mr. Bonine it’s let’s just plan for the best-case scenario and adjust if we have to.”