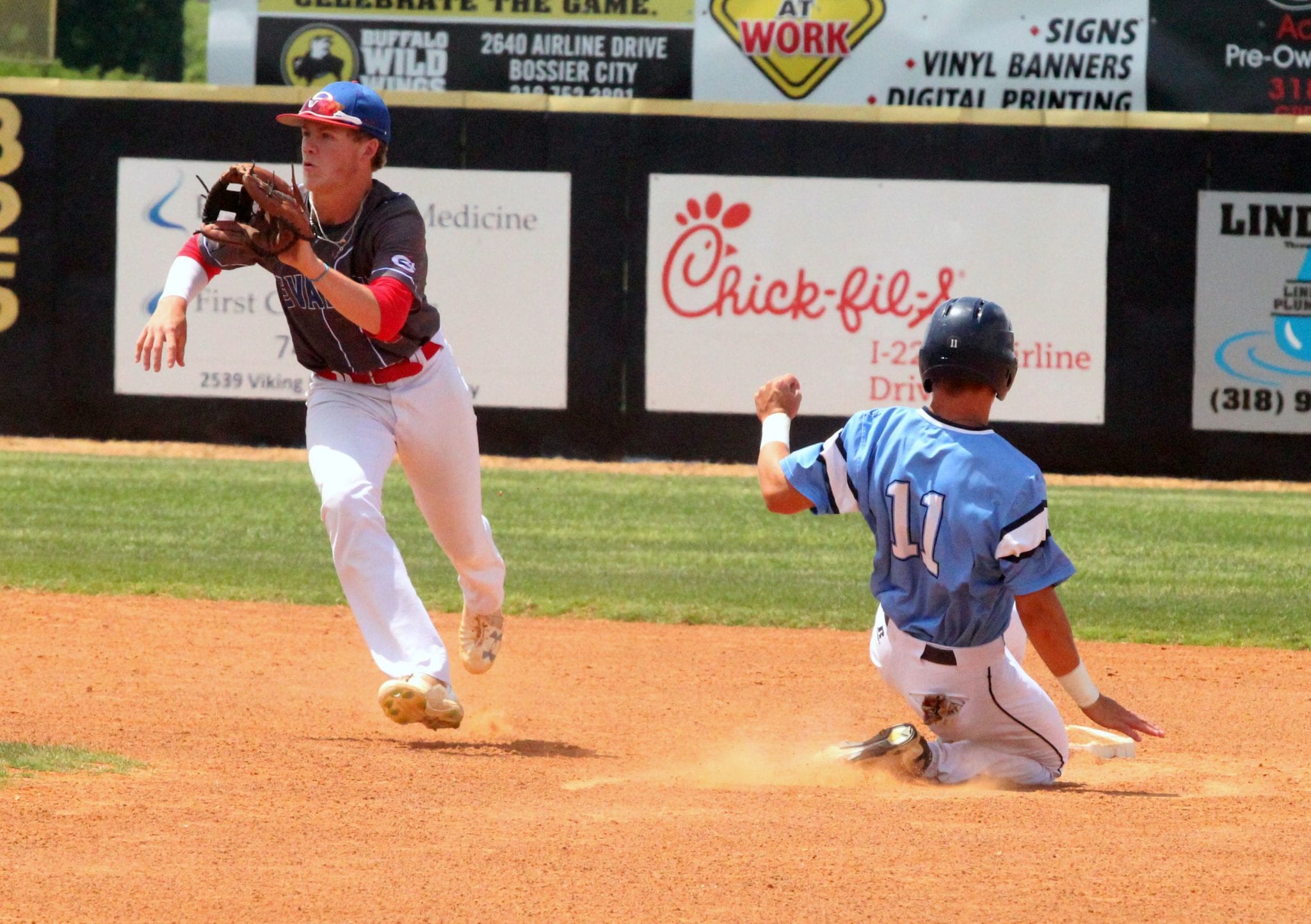 The Airline Vikings clinched a share of their fourth straight District 1-5A baseball championship with a 9-5 victory over the Evangel Christian Academy Eagles on Saturday afternoon at Airline.

Airline, which avenged a 6-5 loss Evangel on Thursday, improved to 20-11 overall and 9-1 in district. Haughton (15-17, 7-3), which defeated Southwood 5-2 at Southwood on Saturday, can earn a share of the title with a sweep of Airline next Tuesday and Thursday.

If Haughton sweeps Airline, Byrd (15-15, 9-3) will also get a share of the championship. The Yellow Jackets completed district play with a 4-2 victory over Captain Shreve on Saturday.

In a non-district game Saturday, the Parkway Panthers fell to Lakeside 1-0 at Lakeside.

At Airline, the Vikings got only two hits in the game but they took what the Eagles gave them.

The Vikings had both of their hits in the first inning. Cameron Parikh led off with a single, advanced to second on a groundout and reached third on a passed ball. He scored on an error on Josh James’ hard-hit ground ball to short.

Jordan’s single scored Jonathan Brandon, who reached on a walk. Mulrenin’s groundout to short scored James to make it 3-0. Jordan scored on a throwing error as Chase Hodges stole second after receiving a walk.

The Eagles cut the lead in half with two runs in the top of the second. Evangel had a chance to score more but third baseman Brandon made a nice catch and doubled off a runner at second.

Evangel took advantage of back-to-back hit batters, three singles and an error to scored three runs in the third for a 5-4 lead.

Airline tied it in the bottom of the inning on three walks and a hit batter. Hunter Nycum got the RBI with a bases-loaded walk.

The Vikings took the lead for good with two runs in the fourth. Three Vikings were hit by pitches and two walked. Mulrenin and Jordan were hit with the bases loaded.

Airline scored twice with two outs in the sixth. Pinch-runner Hunter Mathewes scored on an error after stealing third and Mulrenin scored on a passed ball.

Freshman Bryson Connell pitched the final five innings for Airline. After giving up two singles in the third, he allowed only one hit and didn’t walk a batter the rest of the way.

At Southwood, Haughton’s Austin Clemmens pitched a complete game, allowing five hits and no earned runs. He struck out four and walked only one.

The Bucs had six hits with Jonathan Plant’s double the only one for extra bases.

Plant’s double came in the first after Sam Herren and Clemmens both walked to start the inning. Plant’s hit scored courtesy runner Hunter Harlan, who had stolen second.

The Bucs added two more in the fifth. CJ McWilliams led off with a single, stole second and third and scored on a Herren single.

Herren advanced to second on a groundout and third on a passed ball. He scored on another passed ball to make it 5-0.

At Lakeside, Parkway had just five singles in the loss. George Booras allowed nine hits in six innings but only the one run. Neither Booras nor Lakeside pitcher Braydon Jones, who went the distance, walked a batter.

Lakeside scored in the third on three consecutive singles. The Warriors had four of their hits in the inning.

Parkway threatened in the second and third. Peyton Lewis and Cameron Phillips had singles in the second but were left stranded. Amani Larry and Eric Brown led off the third with back-to-back singles.

Both runners advanced a base on a fielder’s choice. But Brown was caught stealing and a Jones got a flyout to end the inning.