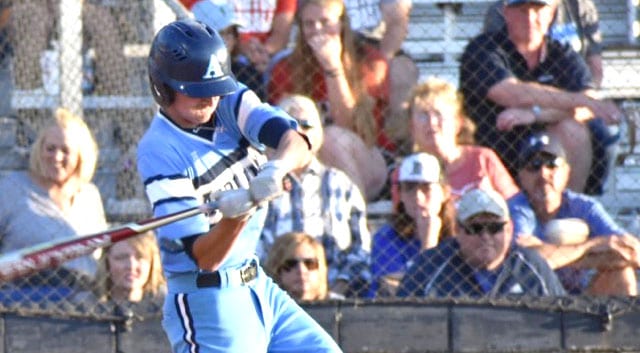 Cameron Parikh wasn’t ready for his senior season to be over.

Parikh’s single with one out in the bottom of the seventh scored pinch-runner Hunter Mathewes from second to give the No. 12 seed Vikings a 1-0 victory over No. 21 Covington in the first round of the Class 5A playoffs Monday evening at Airline.

Parikh’s hit was only the fifth of the game for the Vikings off Covington’s Zack Smith. Bryson Connell was hit by a pitch. Hunter Nycum followed with a ground ball to third that resulted in a error.

Parikh, a Louisiana Tech signee, turned in a dominant performance on the mound. He allowed four hits, struck out 10 and walked none. He threw an efficient 84 pitches of which 66 were strikes.

In another 5A first-round game, Parkway’s best season in many years ended with a 5-1 loss to No. 7 Central in Baton Rouge. Parkway, the No. 26 seed, finished 18-15 under first-year coach David George.

Parkway played without senior second baseman Bryan Day, who is undergoing treatment for leukemia at St. Jude’s in Memphis. Day’s mother posted a photo on Facebook of him watching the game.

At Airline, the Vikings had a chance to put runs on the board early.

Airline loaded the bases in the second thanks to a Peyton Jordan single, walk and hit batter. But Covington ended the threat with a strikeout.

The Vikings got three of their hits in third, singles by Jonathan Brandon, Hunter Hollis and Chase Hodges. But a flyout left all three stranded.

Airline didn’t get another runner on base until Connell was hit by the pitch in the seventh. Parikh’s game-winner was a line drive shot to center field.

Covington got two of its hits, both two-out singles, in the first and second innings. Neither runner advanced.

Parikh set down the next 10 Lions in order. Covington got something going in the sixth, though. Two singles advanced a runner to third with two outs. But Parikh came through with a clutch strikeout.

Covington went down in order in the seventh, setting up the Vikings’ walkoff win.

Parkway starter Eric Williams, a junior, allowed only three hits in six innings. But the Wildcats took advantage of eight walks, two hit batters and four Parkway errors. They also were aggressive on the basepaths.

Central scored two runs with two outs in the bottom of the second on a bases-loaded walk and a passed ball. Brant Husser’s leadoff homer made it 3-0 in the third.

The Wildcats scored their final two runs with two outs in the fourth. Both came on double steal attempts with the first resulting in a run-scoring error and the second in a steal of home. The Panthers threw out the runner going to second.

Parkway had another error in the inning along with a walk and hit-by-pitch.

The Panthers scored their run in the sixth. Williams drew a walk and Eric Brown followed with a single. Williams advanced to third on Caleb Reese’s groundout and scored on Derious Bradford’s groundout.

Parkway had a few chances before that. Amani Larry and Williams drew back-to-back walks with two outs in the third but a fielder’s choice ended the threat.

Bradford reached on a fielder’s choice and advanced to third on two passed balls with two outs in the fourth. But Hilliard got a groundout to end the inning.

Hilliard struck out five, but he was most effective in getting the Panthers to ground out. Parkway had nine of those along with three flyouts.

Peyton Lewis had a two-out single with no one on in the second but didn’t advance.